Joe Biden held a national memorial observance from the base of the Lincoln Memorial, as the United States ticked over 400,000 deaths from the coronavirus.

President-elect Joe Biden has led a national memorial observance on the eve of his inauguration to honour the 400,000 Americans who have died from COVID-19 during the 11 months since the novel coronavirus claimed its first US victim.

The sundown commemoration came just hours before President Donald Trump was due to leave the White House and hand over a country in crisis.

The ceremony, spearheaded by Biden and Vice President-elect Kamala Harris from the base of the Lincoln Memorial, marked the federal government's first official nod to the staggering death toll from the pandemic.

"We must remember. It's hard sometimes to remember, but that's how we heal. It's important to do that as a nation," Mr Biden said in brief remarks to kick off a tribute that was to include observances in cities across the country. 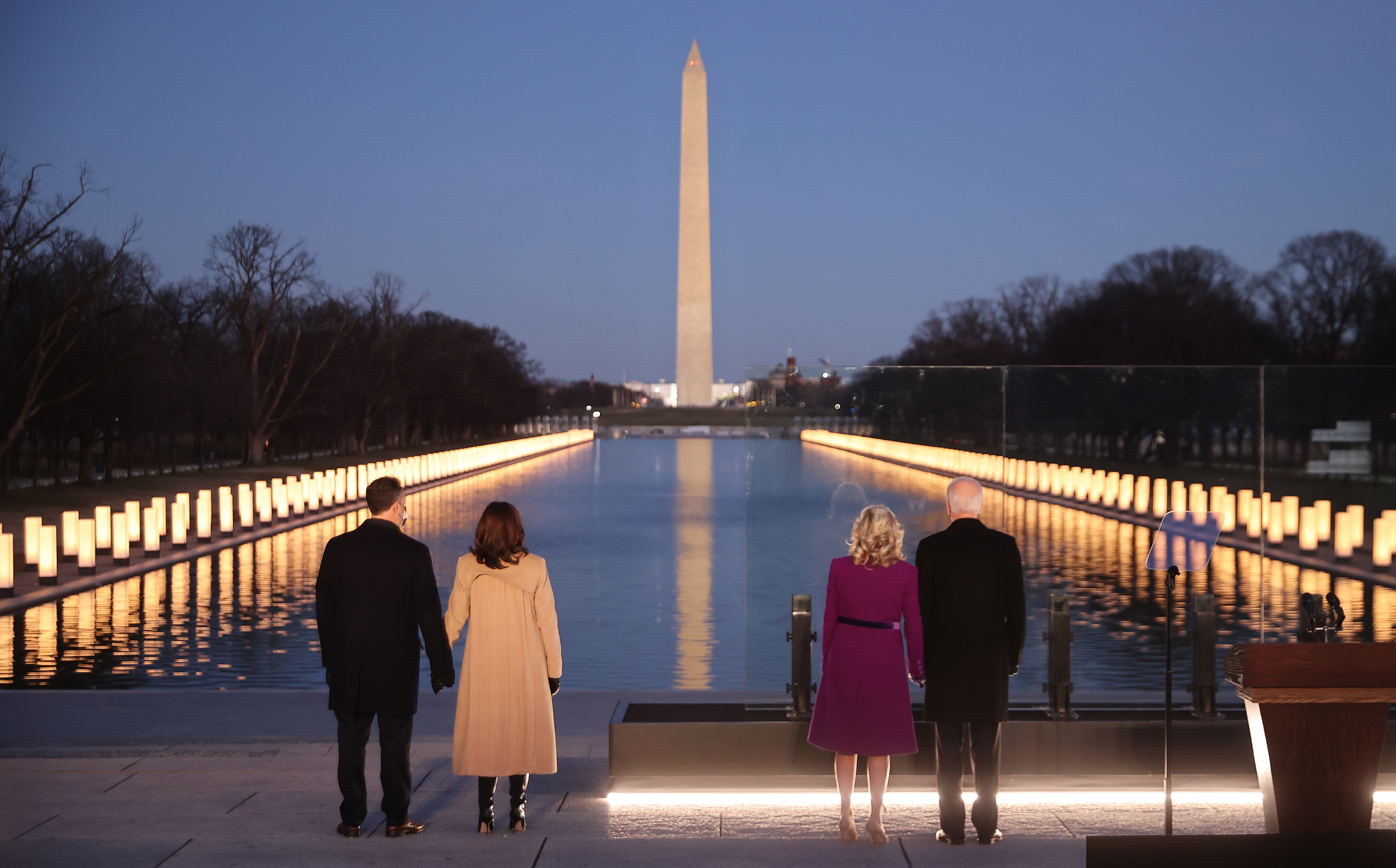 Joe Biden and Kamala Harris held a memorial for the victims of the pandemic in the US.
Getty Images North America

As darkness fell over the nation's capital, 400 electric lamps lining the sides of the Reflecting Pool were illuminated to honour the 400,000 lives lost, followed by gospel singer Yolanda Adams' performance of the song Hallelujah, then a moment of silence in memory of the dead.

"Though we may be physically separated, we the American people are united in spirit," Ms Harris said separately.

About seven kilometres from where Mr Biden appeared, the bells of the National Cathedral were tolled 400 times after he spoke. 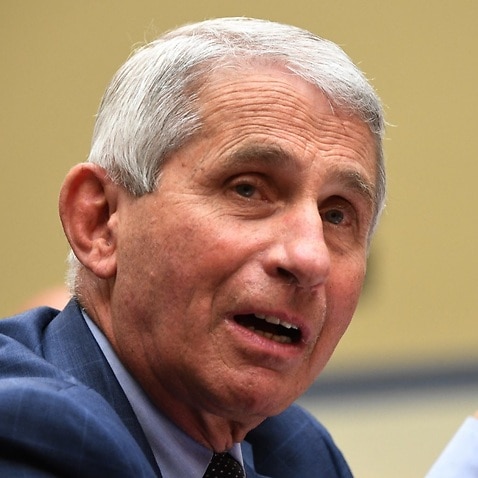 The United States surpassed 24 million COVID-19 infections and 400,000 lives lost from the virus, according to a Reuters tally.

The country has recorded more than 200,000 new cases and 3,220 deaths on average over the past seven days.

The observance marked the beginning of a new era in the country's battle against COVID-19 under Mr Biden, who has pledged to make coronavirus relief a top priority when he takes office on Wednesday under unprecedented security measures in the nation's capital. Mr Biden will inherit a grieving and sickened nation from Mr Trump, who critics say was to blame for a disjointed and ineffectual response to the pandemic, resulting in the US suffering the highest COVID-19 national death toll in the world.

The US is trailing in its vaccination goal, with only 12.3 million shots administered out of more than 31 million distributed as of 15 January.

'It all comes from Delaware'

Before the memorial, Mr Biden gave an emotional speech where he fought back tears as he commemorated his deceased son and gave thanks to his home state of Delaware.

"I only have one regret, that he's not here," Mr Biden said, referring to his son Beau, a former attorney-general who died of brain cancer in 2015.

"Because we should be introducing him as president."

This speech marked the final event for Mr Biden before he is sworn in as the 46th President of the United States.

Addressing a small, socially distanced crowd at a National Guard centre named in the honour of his late son, the 76-year-old teared up twice.

"It's kind of emotional for me," he told the crowd, while calling himself a "son of Delaware".

"You've been with me my whole career, through the good times and the bad. 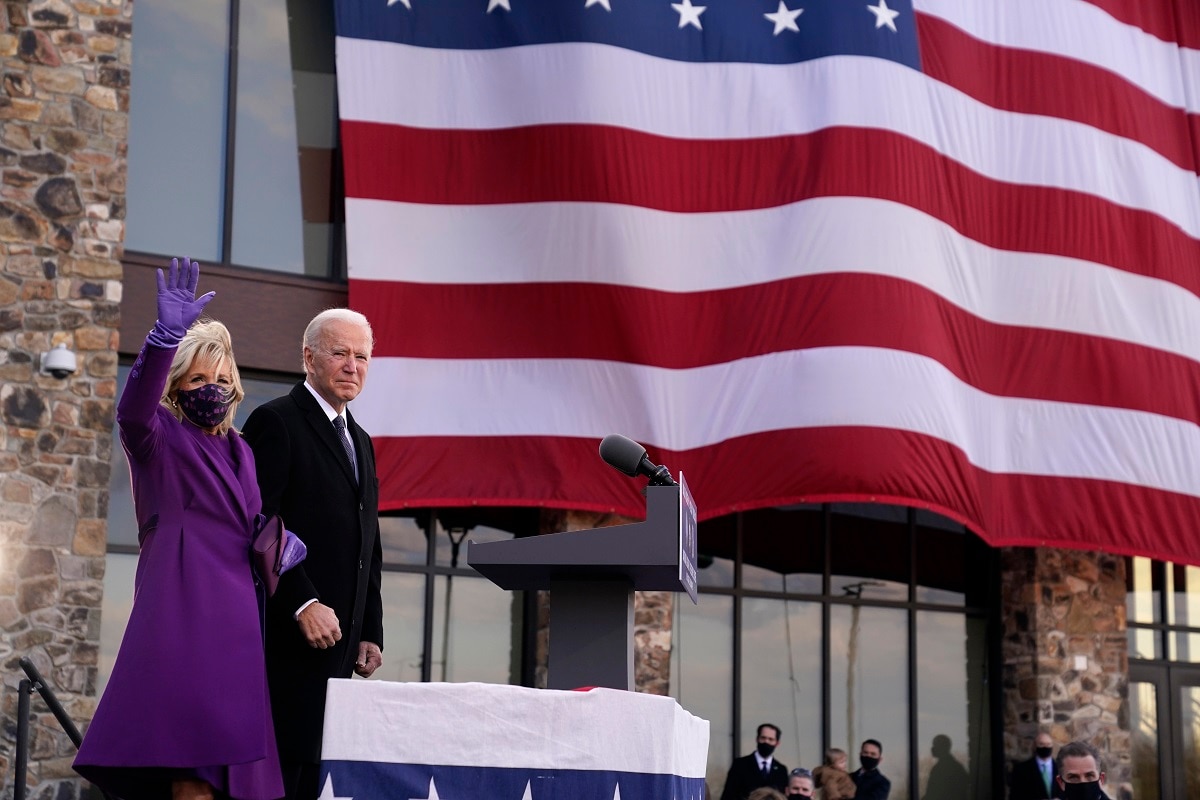 Mr Biden had planned on travelling to Washington DC by train, as he had for years as a senator, and with President Barack Obama before their inauguration in 2009.

"Twelve years ago, I was waiting at the station station in Wilmington for a Black man to pick me up on our way to Washington, where we were sworn in as president and vice president of the United States of America," Mr Biden said.

"And here we are today, my family and I, about to return again to Washington, to meet a Black woman of South Asian descent, to be sworn in as president and vice president of the United States.

"When I die, Delaware will be written on my heart," he told the crowd.

Dozens of asylum seekers released from detention in Brisbane, with more to follow, advocates say

The Feed 16 mins ago