Tonga's PM has reportedly been moved to tears over tales from young Tuvaluans who feared losing their home from extreme weather. 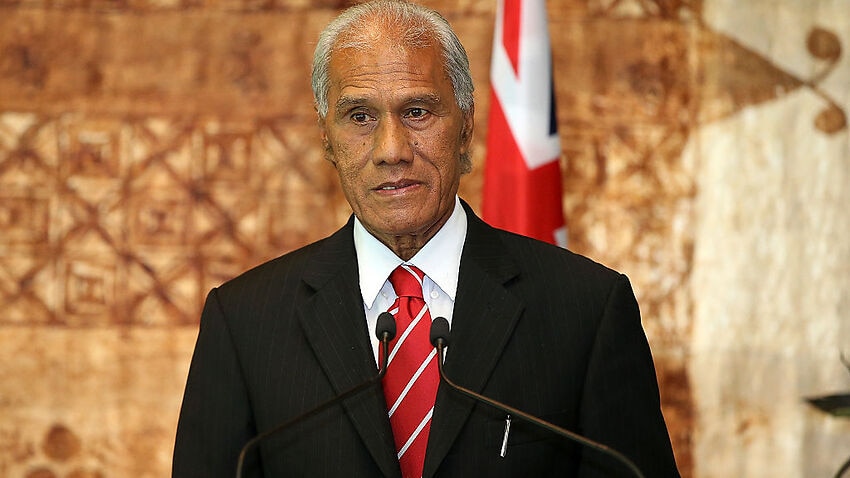 The prime minister of Tonga was brought to tears over concerns that climate change could lead to the destruction of the Pacific's seaside communities.

As regional leaders gathered for this year's Pacific Islands Forum (PIF) in Tuvalu, the tiny nation's Prime Minister Enele Sopoaga made the admission as part of an impassioned plea to the Australian government to cut domestic emissions.

Mr Sopoaga said Tonga's Prime Minister Samuela 'Akilisi' Pohiva had been reduced to tears as climate change activists delivered a presentation to the leaders earlier in the week.

“The prime minister of Tonga actually cried, in the retreat, did you know that?” Mr Sopoaga said in a press conference alongside Australian Prime Minister Scott Morrison.

“The leader of Tonga actually shed tears in front of the leaders, because of the passion referring to the presentation from the two young warriors of climate change the other day.”

Mr Morrison and his Pacific counterparts spent more than 12 hours in negotiation on Thursday over the wording of final statements from Pacific Islands Forum.

The leaders agreed to a final communique, which was paired with a statement on climate change, calling on G7 and G20 members to "rapidly implement their commitment to phase out inefficient fossil fuel subsidies".

It doesn't mention coal, using the term "fossil fuels" in its place.

The climate statement also states the region "can only exist if the international community pursue efforts to limit global warming to 1.5 degrees above pre-industrial levels, as set out in the Paris Agreement".

"We stressed very strongly during our exchange, in fact, between me and Scott (Morrison), that you are concerned about saving your economy in your situation in Australia," Mr Sopoaga told reporters.

"I'm concerned about saving my people in Tuvalu and likewise the leaders of other South Pacific small island countries.

"Please don't expect that we came and we bow down (to Australia), or that sort of atmosphere."

The language during debate became "flary" but there was no swearing, he added.

Prime Minister Scott Morrison says he has no plans to help top up the Green Climate Fund. Source: AAP

During negotiations Mr Morrison briefed the other leaders on his government's climate achievement, claiming they were surprised about Australia's "record" achievement on emissions reductions.

"That's not a message they've been reading about out of Australia," he told reporters prior to jetting off from Tuvalu on Thursday afternoon.

The final communique reaffirms climate change as the single greatest threat to the livelihoods, security and wellbeing of people in the Pacific.

But New Zealand Prime Minister Jacinda Ardern claimed she had not seen the statement, so could therefore not agree to it.

It should be made an agenda item so it can be properly discussed, she said.

The statement on climate change makes replenishing the UN's Green Climate Fund an option, but doesn't call for its prompt replenishment as the statement from smaller states did.

Mr Morrison says he has no plans to help top up the Green Climate Fund, arguing that some Pacific nations find it frustrating.

Australia will instead deal directly with the region.

While Mr Sopoaga softened his language to say he was "very happy" with the final result, Fijian prime minister Frank Bainimarama says the communique, unfortunately, "settled for the status quo".