In their submission, the PKKP detailed their desperate attempts to halt the destruction as Rio Tinto continued to lay the ground with explosives.

The Traditional Owners of Juukan Gorge have slammed Rio Tinto for continuing to lay explosives in secret, as they pleaded with the mining giant to halt the destruction.

Puutu Kunti Kurrama people and the Pinikura people today released their long-awaited submission to the parliamentary inquiry investigating the destruction of Juukan Gorge.

The 46,000 year old site was destroyed by Rio Tinto in May, to allow the expansion of its Brockman 4 iron ore mine.

In its submission, the PKKP detailed their desperate attempts to halt the destruction, as Rio Tinto continued to lay the ground with explosives.

“In the days before the disaster Rio Tinto kept loading charges around Juukan 1 and Juukan 2 and then only took steps to avoid blast damage to sites over which they did not have legal authority to destroy,” the submission says. PKKP and Rio Tinto representatives visited Juukan Gorge on 28 October 2019, with Rio confirming there were no plans to mine Juukan Gorge.

Nonetheless, on 13 May, the mining company loaded 226 blast holes at the site, without the knowledge of the PKKP.

The PKKP became aware of plans to blast Juukan Gorge two days later, after it followed up on a request to visit the site during NAIDOC week.

After the PKKP raised concerns, Rio Tinto agreed to delay the blasting at the Juukan site by three days until 20 May.

But the mining company continued to lay the ground with explosives, loading an additional 156 blast holes between 16 and 19 May without informing Traditional Owners.

The PKKP also sought the involvement of an independent mining safety expert to advise whether the explosives could be safely removed, and sought advice from solicitors about an emergency declaration to stop the destruction under the Aboriginal and Torres Strait Islander Heritage Protection Act 1984. 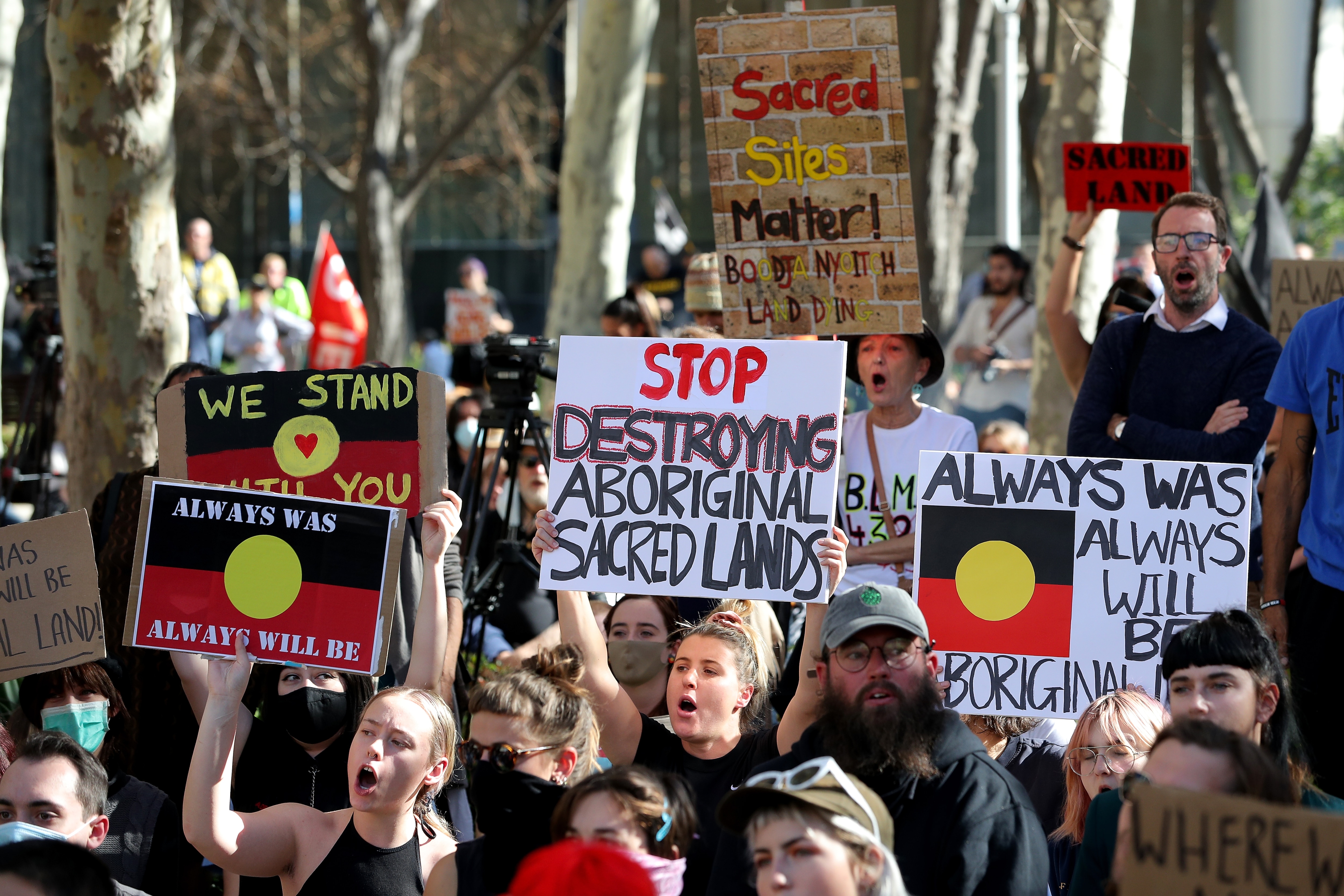 Protesters attend a rally outside the Rio Tinto office in Perth in June.
AAP

On 19 May, the PKKP requested a 48-hour moratorium on any further action by Rio Tinto at the site, to allow them to consider their options.

Rio Tinto denied the PKKP’s request that afternoon, but allegedly became aware of three additional heritage sites near the site that it did not have a Section 18 Approval to destroy.

“Rio Tinto became very concerned there were three heritage sites which had not been subject of section 18 approvals which would likely be damaged in the blast,” the PKKP submission reads.

“(It) had engaged its own expert for the purpose of advising on mitigating the impact of the blast on the three additional heritage sites for which approval had not been granted.”

On 22 May 2020, Rio Tinto provided PKKP’s expert with advice that the explosives at Juukan 1 and Juukan 2 rock shelters couldn’t be unloaded due to an unacceptable safety risk.

But the next day, and without informing the PKKP, Rio Tinto went ahead and unloaded seven of the blast holes to protect the three additional heritage places for which it did not have approval to destroy.

Two days later, on 24 May, the remaining explosives at Juukan Gorge were detonated, destroying the ancient rock shelters.

The chain of events was detailed in the PKKP’s submission to the Joint Standing Committee on Northern Australia.

The committee recently announced it would defer indefinitely a planned site visit to Juukan Gorge due to coronavirus travel restrictions.

“We believe that Rio Tinto could have done more to avoid the destruction of the rock shelters once our concerns were heard and the explosive holes had been drilled – as demonstrated by their ability to avoid damage to other sites during the same blast,” the submission says.

The Juukan 1 and 2 rock shelters were known to have revealed thousands of artefacts, including grinding stones, rock seats, a blade quarry, flaked stone materials, and the remains of a belt made of human hair that has been genetically identified to match PKK descendants.

In its submission, PKKP rejected claims by Rio Tinto senior executives that it wasn’t aware of the ethnographic and archaeological significance of the Juukan Gorge before May 2020.

“We believe that attitudes that promote minimum compliance and which undervalue heritage protection and proper consultation have been consistently demonstrated by Rio Tinto,” the submission said.

“Under current conditions a disaster of this kind could easily happen elsewhere. All of this demonstrates that the industry cannot be left to regulate itself.”

The committee is due to release its report by 9 December.