Four transgender people are standing for office in next week's Pakistan election. 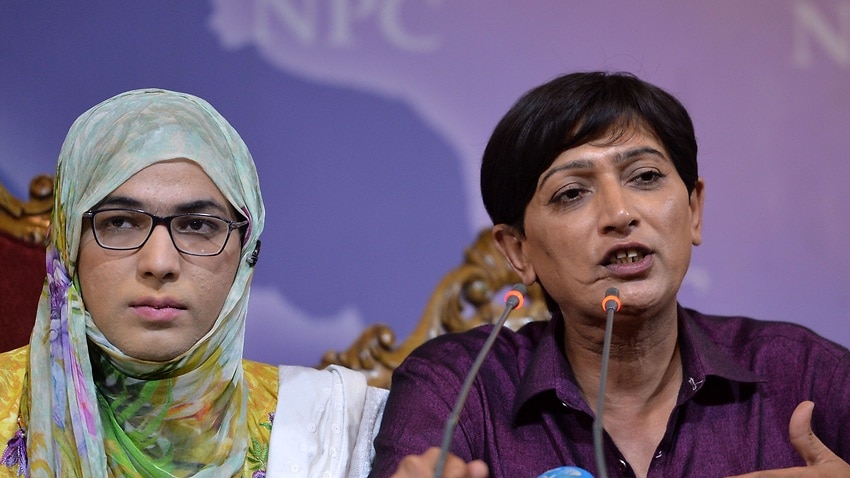 Nayyab Ali (L) and Nadeem Kashish are both standing for seats. Source: AAP

A small group of transgender activists in Pakistan are hoping to make history in next week's general election.

Thirteen transgender people - also known as hijra or khawaja sira - were reportedly running for office this year although most have dropped out due to harassment and lack of funds.

But for the four who remain, this may be their moment.

"No one can say whether that will happen in these elections but you do get a sense that there is a sense of wanting to try something different," Deputy Director of Amnesty International in South Asia Omar Waraich told Time.

A seat at the table

One of the four transgender candidates standing for office is Nayyab Ali, the national spokesperson for the All Pakistan Transgender Election Network.

Her experience mirrors that of many transgender people in Pakistan, having been a victim of violence and ridicule.

Ali was reportedly forced to leave home at the age of 13 and later attacked with acid by a former boyfriend.

She told Time that "the transgender community is progressing slowly in Pakistan - we're finding positions in various industries like education and journalism".

"But the real change-making power lies in politics, which is why I'm contesting the elections this year. We need to be part of the legislative process to better our community," she said.

"It is my constitutional rights to take part in democracy and democratic decision making" says our dearest Nayyab Ali #Transvoste #Election2018 #fdi pic.twitter.com/TUAIrHqcpn

She told the BBC that a spike in violence against the transgender community spurred her to run.

"Transgender people are being murdered now. There used to be incidents of beating and acid attacks... but these days they just kill us," she said.

It's a point known all too well by fellow-transgender candidate Maria Khan.

"I barely survived an assassination attempt when shots were fired at my house in Mansehra. There are still bullet holes all over my front door," she said.

Campaigners say there are signs of progress in the conservative South Asian nation where homosexuality remains a crime.

The Supreme Court ruled in 2009 hijras could get national identity cards as a "third sex" and last year the government issued its first passport with a transgender category.

And a new bill passed last year allowed Pakistanis to determine their own gender identity and clamped down on harassment and discrimination against the trans community.

In a big win for the visibility of transgender people, Marvia Malik became Pakistan's first trans news anchor in March.

While Malik is happy that the government is slowly bringing the community into the mainstream, she said the only way to get meaningful change if is "change begins at home".

"We have to tell parents not to be ashamed of their kids who cannot conform to the sex assigned at birth," she said, adding that transgender people were often thrown out by their families.

"We are left with no option but to turn to begging, dancing and selling our bodies."