An Oxford University trial of a coronavirus vaccine has been put on hold due to safety concerns after a trial participant had a serious adverse reaction, in what AstraZeneca referred to as a "routine action".

Trials of an Oxford University coronavirus vaccine have been put on hold after a participant experienced a serious adverse reaction.

Australia has ordered 33 million doses of the AstraZeneca vaccine to be rolled out from early next year if the trials prove successful.

Deputy Chief Medical Officer Nick Coatsworth said the delay did not necessarily mean the vaccine deal was dead but the adverse reaction needed to be investigated.

He is not worried about the trial being put on hold and praised the transparency of those testing the vaccine.

"I'm going to wait to see exactly what the adverse reaction was and whether they attribute it to the vaccine," Dr Coatsworth told Nine on Wednesday.

AstraZeneca confirmed the trial had been voluntarily paused after an unexplained illness in a British participant.

AstraZeneca and the University of Oxford have paused 'late-stage' trials of a potential COVID-19 vaccine: “This is a routine action which has to happen whenever there is a potentially unexplained illness in one of the trials, while it is investigated" #auspol @SBSNews

An independent committee will now review the data.

An AstraZeneca spokesperson confirmed the pause in vaccinations covers studies in the US and other countries.

Late last month, AstraZeneca began recruiting 30,000 people in the US for its largest study of the vaccine.

It also is testing the vaccine, developed by Oxford University, in thousands of people in Britain, and in smaller studies in Brazil and South Africa. 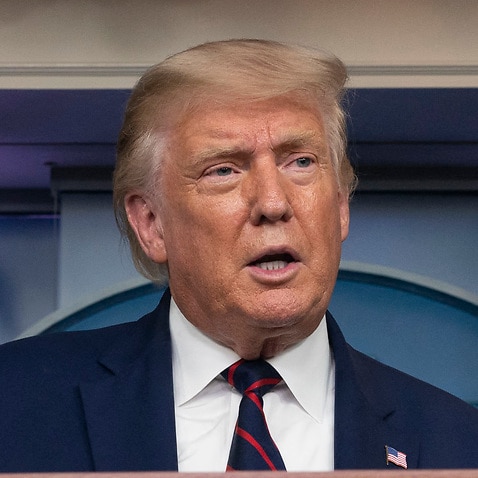 Two other vaccines are in huge, final-stage tests in the United States, one made by Moderna Inc and the other by Pfizer and Germany's BioNTech.

Those two vaccines work differently to AstraZeneca's, and the studies already have recruited about two-thirds of the needed volunteers.

Temporary holds of large medical studies aren't unusual, and investigating any serious or unexpected reaction is a mandatory part of safety testing.

The development came the same day that AstraZeneca and eight other drugmakers issued an unusual pledge, vowing to uphold the highest ethical and scientific standards in developing their vaccines.

The announcement follows worries US President Donald Trump will pressure the US Food and Drug Administration to approve a vaccine before it's proven to be safe and effective.

The US has invested billions of dollars in efforts to quickly develop multiple vaccines against COVID-19.

But public fears that a vaccine is unsafe or ineffective could be disastrous, derailing the effort to vaccinate millions of Americans.