Australians who hold dual citizenship of one of the seven countries named in an executive order signed by Donald Trump will be banned from entering the US.

The US State Department has confirmed people who hold dual citizenship with one of seven countries named in an executive order signed by US President Donald Trump will not be able to enter the country.

This means Australians who are also citizens of Iran, Iraq, Sudan, Yemen, Somalia, Libya or Syria may also be affected under the new immigration policy.

A spokesperson for the Foreign Minister Julie Bishop confirmed in a statement that the latest changes in the US would affect Australian dual nationals from these seven countries.

"We are aware that visa issuance to nationals of Iraq, Iran, Libya, Somalia, Sudan, Syria and Yemen has been suspended following the signing of the Executive Order on Protecting the Nation from Terrorist Attacks by Foreign Nationals on 27 January 2017.

"The Australian Embassy in Washington is engaging with US officials on the potential implications of the suspension for Australian travellers, including dual nationals."

The statement also went on to say that the Department of Foreign Affairs and Trade had not received requests for consular assistance from Australians stranded in the United States and unable to board flights.

"Travellers are advised that visa and other entry and exit conditions can change at short notice. Travellers should contact the nearest Embassy or Consulate of the United States for the most current information.” US online media outlet Quartz reported the State Department confirmation a day after Trump signed the controversial policy into effect.

It puts a temporary halt on all refugees, pending new vetting measures, and bans all citizens of the seven countries, mainly Muslim, countries from entering the US.

The ban on Syrian citizens is indefinite while the ban for citizens of the other six countries is currently set for 120 days.

An Iraqi-born MP in British Prime Minister Theresa May's government has confirmed the ban will relate to him and his wife.

Australians who hold only Australian citizenship will still be able to travel to the US as usual under the visa waiver program.

Australians, New Zealanders and citizens of 35 other countries allied with the US will still have the option of going online and applying for entry to the US, if their travel is for business or pleasure, and less than 90 days. There were fears the order Mr Trump signed on Friday, titled The Protection of the Nation from Foreign Terrorist Entry Into the United States, could scrap the visa waiver program and force Australians to sit for interviews at US consulates before departing. But that was not the case.

Mr Trump's order did "immediately suspend" the unrelated visa interview waiver program for some visitors to the US who have visas and need to renew them.

"I am establishing new vetting measures to keep radical Islamic terrorists out of the United States of America," Mr Trump said at the signing ceremony.

"We don't want them here.

"We want to be sure we are not admitting into our country the very threats our soldiers are fighting overseas.

"We only want to admit those into our country who will support our country and love deeply our people."

SBS News has contacted the Department of Foreign Affairs and Trade for confirmation of their latest travel advice for dual citizens heading to the US. 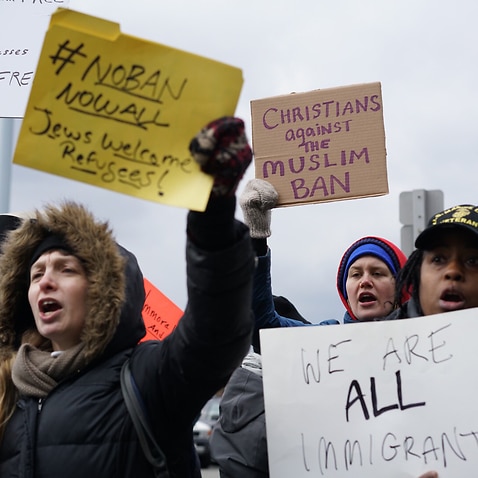 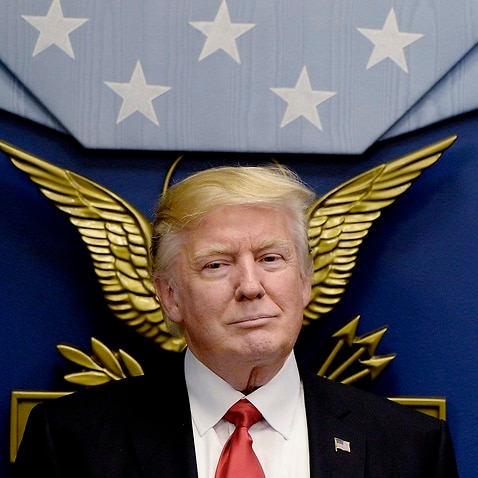