US President Donald Trump visited Jerusalem and the Western Wall on Monday as he sought ways to achieve Israeli-Palestinian peace, but also used the opportunity to again lash out at Iran.

Trump became the first sitting US president to visit the Western Wall in the disputed city, placing his hand on one of the most sacred sites in Judaism in a highly symbolic move.

Trump's visit is part of his first trip abroad as president, and follows an initial stop in Saudi Arabia where he urged Islamic leaders to confront extremism while also criticising Iran.

It comes as he contends with a raft of problems back home, including a special counsel investigating whether his associates colluded with Russia. He later travelled by helicopter to Jerusalem and, in remarks at President Reuven Rivlin's residence, launched another salvo against Iran, Israel's arch-enemy.

"The United States and Israel can declare with one voice that Iran must never be allowed to possess a nuclear weapon -- never ever -- and must cease its deadly funding, training and equipping of terrorists and militias," Trump said.

"And it must cease immediately."

When meeting Netanyahu, Trump said Iran should have thanked the United States for the 2015 nuclear accord between Tehran and world powers because it led to the lifting of sanctions.

"Instead of saying thank you to the United States, they now feel emboldened," Trump said.

In Tehran on Monday, Iran's newly re-elected President Hassan Rouhani ridiculed US strategy in the Middle East, dismissing Trump's summit with Arab leaders in Saudi Arabia as "just a show". 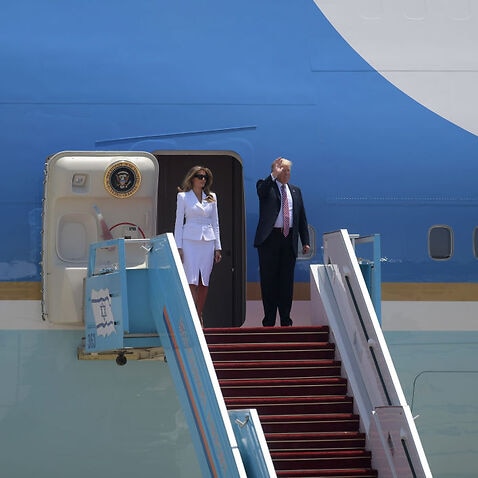 Concessions for Palestinians as Trump arrives in Israel

Security was extremely tight for the Israeli leg of the visit, with police deploying some 10,000 officers.

The alleys and passageways of Jerusalem's ancient Old City, which Trump visited later in the day, were essentially under lockdown.

The first was the Church of the Holy Sepulchre, built at the site where Christians believe Jesus was crucified, buried and resurrected.

Afterwards, wearing a black skullcap, he made his symbolic visit to the Western Wall, placing what appeared to be a written prayer or note between its stones, as is custom.

He was not accompanied by any Israeli leaders during the visit to the site in east Jerusalem.

Allowing them to do so could have led to accusations that Washington was implicitly recognising Israel's unilateral claim of sovereignty over the site, which would break with years of US and international precedent.

The status of Jerusalem is ultra-sensitive and has been among the most difficult issues in Israeli-Palestinian peace talks. 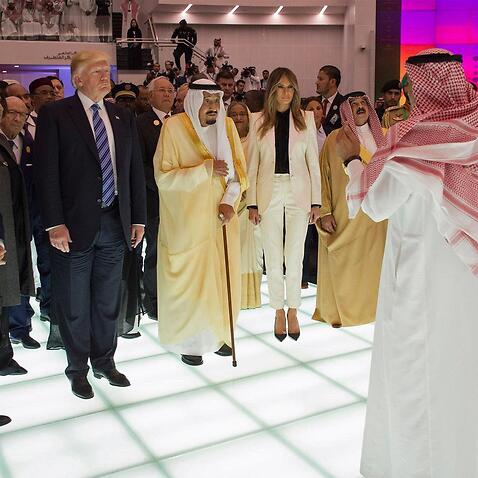 Israel occupied east Jerusalem and the West Bank in 1967 in moves never recognised by the international community.

Before dinner at Netanyahu's residence, Trump again spoke of a "renewed effort at peace between the Israelis and the Palestinians," but avoided delving into details of the conflict.

"I've heard it's one of the toughest deals of all, but I have a feeling that we're going to get there eventually, I hope," he said.

Speaking earlier, he said: "We have before us a rare opportunity to bring security and stability and peace to this region and to its people, defeating terrorism and creating a future of harmony, prosperity and peace."

On Tuesday, Trump will meet Palestinian president Mahmud Abbas in Bethlehem in the West Bank, visit the Yad Vashem Holocaust memorial in Jerusalem and give a speech at the Israel Museum.

Any leader would face an enormous challenge in seeking to bring the Israelis and Palestinians together for meaningful talks, and Trump's inexperience and domestic political struggles will only add to it.

He has spoken of his self-described deal-making prowess in vowing "we will get it done".

Trump has sent mixed signals about how he will approach the conflict.

He cast uncertainty over years of international efforts to foster a two-state solution when he met Netanyahu at the White House in February.

At that meeting, he said he would support a single state if it led to peace, delighting Israeli right-wingers who want to see most of the West Bank annexed.

At the same time, he urged Israel to hold back on settlement building in the West Bank, a longstanding concern of Palestinians and much of the world.

Trump advocated during his campaign breaking with decades of precedent and moving the American embassy from Tel Aviv to Jerusalem, deeply alarming Palestinians.

He has since said the move was still being looked at.

Trump's seeming openness to at least some of Abbas's concerns has given Palestinians more reason for hope than many may have expected, but still reason to remain wary, some analysts say.

On the Israeli side, Netanyahu heads what is seen as the most right-wing government in the country's history, and members of his coalition were elated with Trump's election.

Trump's actions since have left them disappointed, with the embassy remaining in Tel Aviv -- at least for now -- and the White House seeking to restart peace efforts.

However, the United States remains Israel's most important ally, providing it with more than $3 billion in defence aid annually.

After Israel and the Palestinian territories, Trump will head to the Vatican along with Brussels and Italy for NATO and G7 meetings.