Turkey says it won't hold back a surge of Syrian refugees toward Europe's borders, as it loses more soldiers in the resistance to the Assad regime. 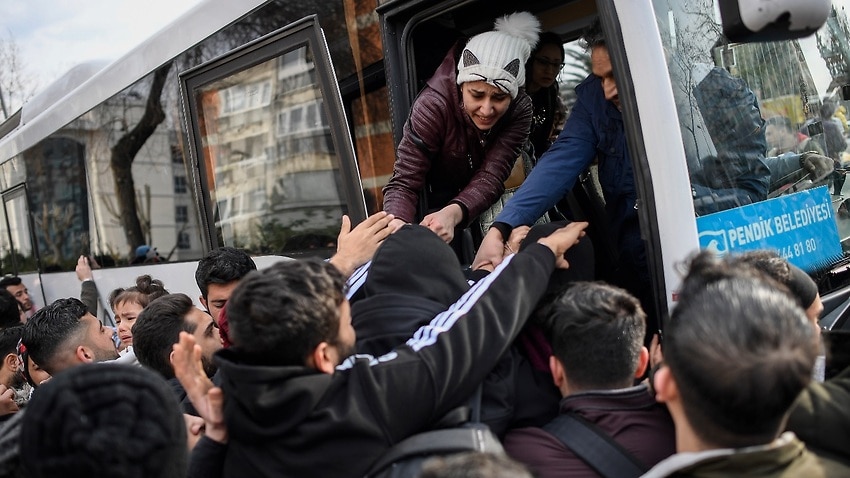 Syrian refugees board a bus as they head to border villages of Edirne province, in Istanbul, Turkey, 28 February 2020. Source: AAP

The presidents of Turkey and Russia have spoken by phone to try to defuse tensions after at least 33 Turkish troops were killed in Syria, and a new wave of refugees headed for the Greek border, after Turkey said it would no longer hold them back.

The attack on Thursday marked the deadliest day for the Turkish military since it first entered the Syrian conflict in 2016 and also raised the prospect of an all-out war between Turkish and Russian-backed Syrian forces, with millions of Syrian civilians trapped in the middle.

Turkey's UN Ambassador Feridun Sinirlioglu told an emergency meeting of the UN Security Council that the country "lost 34 soldiers" - higher than the 33 previously reported by Turkish officials - and "a significant number" were wounded.

"We have not identified the nationality of the aircraft which struck our convoy and positions," he said, but "the radar tracks demonstrate that (Syrian) regime and Russian aircrafts were in formation flight during that time."

Russia denied its aircraft were responsible.

NATO envoys held emergency talks at the request of Turkey, a NATO member. Turkey's 28 allies expressed their condolences over the deaths and urged de-escalation, but no additional NATO support was offered.

NATO members are deeply divided over Turkey's actions in Syria, and European allies are concerned about any new wave of refugees.

Refugees walk near fences enforcing the Greek border as they try to enter Europe, in Edirne, Turkey, 28 February 2020. Source: AAP

Erdogan, whose country already hosts more than 3.5 million Syrian refugees, has long threatened to "open the gates" for millions to flee to Europe unless more international support was provided.

The crisis stems from a Syrian government offensive that began December 1 with Russian military support to retake Idlib province in northwestern Syria, the last opposition-held stronghold.

In their phone call, Erdogan and Russian President Vladimir Putin discussed implementing agreements in Idlib, the Kremlin said. Fahrettin Altun, Erdogan's director of communications, said they had agreed to meet "as soon as possible."

Erdogan spoke with a series of global leaders on Friday, including German Chancellor Angela Merkel and US President Donald Trump, who both called for the Syrian government and its supporters to stop their offensive to avoid a humanitarian crisis.

"We stand by our NATO Ally Turkey in the aftermath of the despicable and brazen February 27 attack on Turkish forces in Idlib, which resulted in the death of dozens of Turkish soldiers," said US Secretary of State Mike Pompeo in a statement.

UN Secretary-General Antonio Guterres told reporters that he's talking with Russia and Turkey, appealing for an immediate cease-fire in Idlib, but "we are not yet there." He warned that "without urgent action, the risk of even greater escalation grows by the hour, and as always, civilians are paying the gravest price."

At Friday's emergency Security Council meeting, 13 of its 15 members supported Guterres' call for an immediate cease-fire.

But Russia and China insisted that Syria has a right to go after terrorists in their own territory. China's UN Ambassador Zhang Jun said that "counter-terrorism operations should be cautious, not to harm civilians."