Labor leader Bill Shorten has slammed Prime Minister Malcolm Turnbull's plan for a lifetime ban on asylum seekers who arrive on boats from entering Australia, saying he's caved in to the 'right-wing extremists' in his party.

Mr Shorten told Fairfax Media that Labor would look closely at the legislation "when the government can be bothered releasing it".

"Of course people who come by people smuggler should not be allowed to settle here - we will never allow the people smugglers back in business," he said.

Nevertheless, he pointed to contributions refugees such as Frank Lowy, Gustav Nossal and Hieu Van Le had made to Australia.

"It seems ridiculous to me that a genuine refugee who settles in the US or Canada and becomes a US or Canadian citizen is banned from visiting Australia as a tourist, businessman or businesswoman 40 years down the track," Mr Shorten said.

He also took aim at the prime minister, saying the Mr Turnbull of old would never have proposed this to keep the right-wing extremists in his party happy.

"He's earning the praise of Pauline Hanson - I hope he's proud of that."

The federal government insists its lifetime ban on asylum seekers who arrive on boats from ever entering Australia is legal under international refugee obligations.

It wants to ban all adults sent to offshore immigration centres on Nauru and Papua New Guinea's Manus Island from ever entering Australia, even as tourists or on business, regardless of whether they're found to be refugees or not. 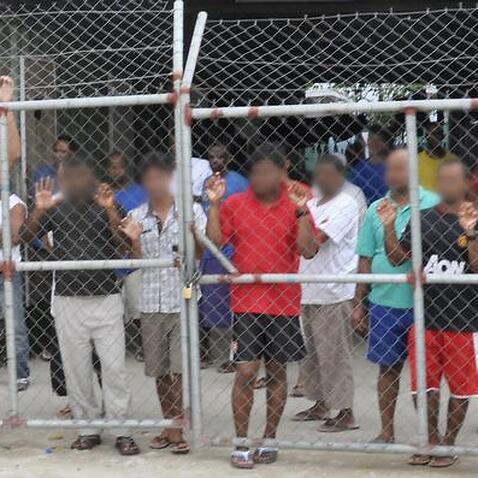 Prime Minister Malcolm Turnbull says the plan does not contravene the international refugee convention to which Australia is signatory.

"We have taken legal advice and we are satisfied it is within power and consistent with our international obligations," he told reporters in outback South Australia on Monday.

Concerns have been raised the ban may contravene article 31 of the convention, which states signatory nations shall not penalise refugees for illegal entry when they have come directly from a territory where their life or freedom was threatened.

Mr Turnbull on Sunday said the Australian Government Solicitor had given extensive advice on the laws.

Labor is under pressure from the government to agree to the ban and from the Greens to reject it.

Spokesman for the Australian Lawyers Alliance, Greg Barns, said the “unprecedented” move is “completely counter to Australia's obligations under the Refugee Convention”.

He said the group has questions over the proposal’s constitutional legality, and he believes it may not stand up to a challenge.

“The High Court's taken a relatively dim view of some attempts by governments over the years to effectively undermine the responsibilities under the Convention,” he said, such as Julia Gillard’s “Malaysia Solution”.

Madeline Gleeson, a lawyer and research associate at the Andrew and Renata Kaldor Centre for International Refugee Law, queried the need for new powers.

She is sceptical of the apparent problem of people entering another country, then attempting to come to Australia on a tourist visa and stay here permanently.

"I think we'd all like to know if this is really that big a problem, because my understanding is that the right to choose who comes into this country and on what visas, already rests with the government,” she said.

“It's not exactly clear what this law would be adding, other than a lot of time and effort and enhancing Australia's negative image overseas."

Treasurer Scott Morrison, who was immigration minister under Tony Abbott, says Mr Shorten had betrayed his position by staying silent since the government's announcement on Sunday morning.

"This bloke is weak," he told 2GB's Ray Hadley on Monday.

Greens leader Richard Di Natale told ABC radio he was hopeful that "if Labor shows a little bit of courage on this issue" it could be struck down.

Mr Turnbull said the government has spoken to just one of the 11 Senate crossbenchers about the proposal, which it will put to parliament next week.

"Refugees are not welcome here," she told the Seven Network.

Independent senators Derryn Hinch and Nick Xenophon separately said they supported the government in general but wanted to see details of the proposal.