Thousands of punters have poured into pubs and RSL clubs around Australia, for the more light-hearted activity of Anzac Day celebrations, a game of Two-up.

The game of Two-Up is in stark contrast to the solemnity of a minute's silence, but for many it is a no less significant Anzac Day tradition.

Paolo Cantarella was among more than 10,000 people who chose to ring in the day at the Harbord Diggers' Club on Sydney's Northern Beaches.

Mr Cantarella has returned from service as an infantryman in the Australian 7th Battalion.

For him, playing a game beloved by servicemen for more than a century, is a fitting tribute to the fallen.

"It represents everyone that has come before us and done the same things before us," he said.

"As a soldier, you really respect what the guys have been through in World War I and II, Vietnam, Korea and East Timor."

Manly resident Laura Turner Cook came to play in remembrance of her grandfather, who served during World War II.

"He was the type to play Two-up so he would have loved this," she said.

"It is a bit silly, but you could be doing anything, and it's what it means to you that makes it special." 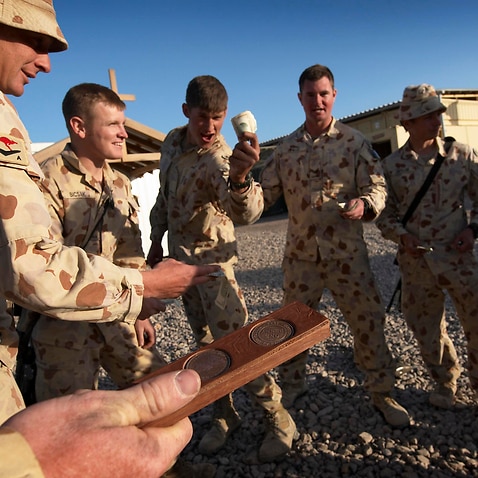 Harbord Diggers is believed to hold the country's biggest Anzac Day game of Two-up - it's a big day for the Mounties Group which owns the venue, founded by soldiers who returned from Gallipoli in 1920.

Mounties Group Marketing Director Larissa O'Connor told SBS the game attracted more than 14,000 people in 2015, making it the busiest day of the year for trade.

"The afternoon tends to be a bit more in the true Australian spirit where you let your hair down and have a drink and a bet with your mates," she said.