Despite the US and allies' attempts to avoid war with North Korea, there's a 'pretty good' chance the Kim Jong-un regime will launch a nuclear strike in the next 12-18 months, says defence analyst.

The US, South Korea, China, Japan and Australia are trying to reach a peaceful solution with North Korea, according to Australian Strategic Policy Institute analyst Dr Malcolm Davis, but adds that diplomacy has little prospect of working.

"We've tried since 1994 and North Korea has only accelerated its nuclear weapons and missile programs in return," the senior analyst in defence strategy and capability tells SBS World News.

He says the country could launch a nuclear strike as early as next year.

"We have been rushed towards a precipice with a war in the next 12 to 18 months in the Korean peninsula, and I can't see any way out of it.

"We're going to continue placing pressure on North Korea to step back from the brink, but North Korea will probably not do that."

Pyongyang responded defiantly after being slapped on Saturday with UN sanctions drafted by the US for testing intercontinental ballistic missiles last month. Turnbull and Bishop back UN sanctions against North Korea

North Korea's Foreign Minister Ri Yong-ho told an annual meeting of foreign ministers of the Association of Southeast Asian Nations (ASEAN) in Manila on Monday that the country's possession of missiles and nuclear weapons "is a legitimate option for self-defence in the face of clear and real nuclear threat posed by the US against the DPRK."

In a recent statement in the official Korea Central News Agency, Pyongyang said the sanctions were a "violent violation of our sovereignty", adding the US would "pay the price for its crime... thousands of times."

Dr Davis says, "if we get to the point where North Korea is about to, or can, mount a nuclear warhead on an ICBM [intercontinental ballistic missile] and demonstrate an operational nuclear-tipped ICBM capability... the US and its allies in Asia have some difficult decisions to make in not a great deal of time."

Deterrence
One decision could be to ramp up deterrence measures against North Korea's use of nuclear weapons, through threatening to retaliate against the regime.

This could see forward deployment of US tactical nuclear forces to the Korean Peninsula. It could also involve enhancing missile defence options.

Pre-emptive measures
The other option would be to consider preventative war or pre-emptive strikes, using conventional (non-nuclear) forces, against the North's nuclear weapons capabilities and its ability to retaliate against South Korea and Japan.

Dr Davis believes the Trump administration will most likely choose the route of deterrence against "an uncontrollable regime, determined to threaten its neighbours."

But he adds that using deterrence to prevent North Korea from conducting a nuclear strike will unlikely be effective.

"[The US] would know that the risk then is that North Korea can continue to develop their nuclear weapons capabilities such that their coercive capability increases over time, and thus deterrence becomes more challenging over time."

He cites North Korea's submarine-launched ballistic missiles as an example - the US is only able to target land-based missiles. The nuclear option: What a war with North Korea would look like

And if the US and its allies chose to take the pre-emptive route, then they'd have to be prepared for North Korea to respond with weapons of mass destruction against South Korea and Japan, he says.

"But we'd know that chances were very high that North Korea would retaliate against South Korea and Japan in a devastating manner."

North Korea may use artillery against Seoul, or conduct chemical or nuclear strikes against South Korea and Japan, he says.

"It's a no win situation for US, South Korea and China."

Does China hold the key?

While it's "entirely possible" for conflict to break out, it is likely there will be "some sort of negotiated outcome," says Dr Ben Zala, a research fellow at the Australian National University's Department of International Relations.

China could leverage its economic power over North Korea - which relies on its major trading partner - to compel Pyongyang to freeze its nuclear and missile testing.

But China will only do this if the US is rational and gives it incentives, Dr Zala says.

"At present I don't see any signs at all that the US is able and willing to think [carefully about negotiating with China]."

He believes China may negotiate with North Korea if the US reduces its 28,000 troops deployed to the Korean peninsula and its joint military exercises with South Korea.

It may also negotiate if the US less frequently condemns China's involvement in the South China Sea dispute. 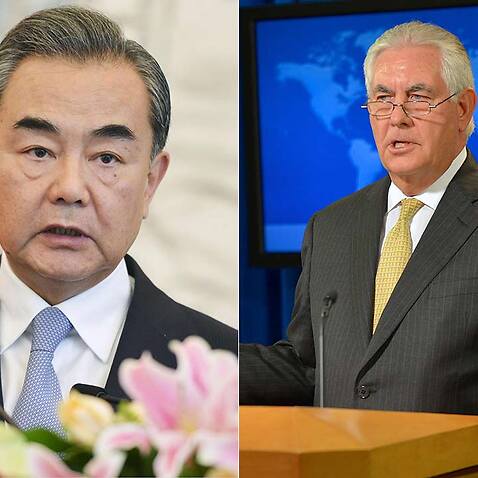 China and US pressure North Korea after sanctions vote The role of rationality

Mr Zala believes North Korea's threats may deescalate if the US is willing to accept a nuclear-armed North Korea.

"And that comes down to whether they think Kim Jong-un is rational."

He believes the North Korean leader is more likely a rational character, saying it's feasible that Kim Jong-un has amped up his country's nuclear threat based on the US' track record of toppling regimes.

"They say, look what happened to Gaddafi – that's not what's going to happen to us.

"If Kim Jong-un is rational, therefore seeing that nuclear war would be suicidal, then he won't do it."