Three men from a far-right group have been convicted and fined for inciting contempt and ridicule of Muslims after a stunt protesting the building of the Bendigo mosque.

United Patriots Front (UPF) leader Blair Cottrell, 27, and supporters Neil Erikson, 32, and Christopher Neil Shortis, 46, have "crossed the line" by making a video in which they beheaded a dummy with a toy sword, Magistrate John Hardy said.

The men chanted "Allahu Akbar" in the video and spilled fake blood on the footpath and wall of a garden bed beside the Bendigo City Council offices.

The stunt on October 4, 2015, was in protest at the council approving the building of a mosque in Bendigo.

Their convictions are the first under Victoria's Racial and Religious Tolerance Act 2001.

Mr Hardy said the video was designed by the men to incite serious contempt or severe ridicule for Muslims in an effort to induce "as many like-minded people" as possible to their rally to be held six days later.

Shortis, a Seventh Day Adventist, indicated he had political aspirations and as a result, would not reoffend.

However, he argued he believed the conviction was unfair.

"While people have mocked my faith as a Christian...a court of law is not the place for hurt feelings," he said.

"I am concerned here today the DPP has the power to institute a blasphemy law in disguise.

"There is a red line that is crossed that a state has the power to be offended on behalf of a class of persons."

Outside Melbourne Magistrates Court, he told reporters "the separation of church and state is now in question".

Earlier on Tuesday, Cottrell told the court it was outside his control what people drew from watching the video, and that he did not intend to "stir up" contempt for Muslims.

"I criticised in that video a tenet of a religion - no specific person or class of people," he said.

He said a "dangerous precedent" had been set. 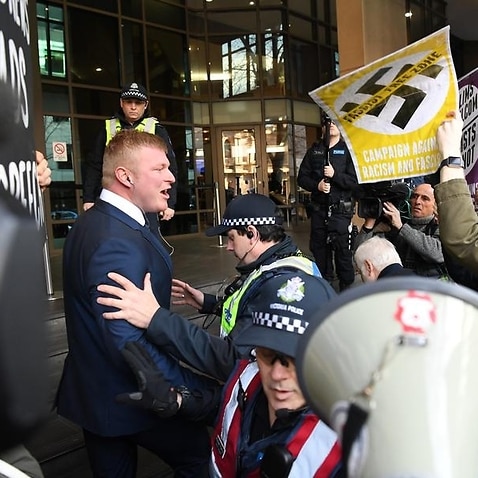 "If we cannot freely express ourselves and criticise other ideologies, that lays the ground for blasphemy charges in this country. And that pretty much destroys freedom of speech," he told reporters outside court.

Each of the men, who represented themselves in court, were convicted and fined $2000 plus $79.50 in statutory costs.

The men have indicated they will appeal in the County Court of Victoria during October.