The US President and Australia's Trade Minister have mounted separate defences of the TPP against criticisms the deal is shrouded in secrecy and could have a negative impact for consumers when it comes to drug patent protections.

The Trans-Pacific Partnership (TPP) deal was reached on October 5 after marathon talks between the United States and 11 Pacific Rim nations.

The trade pact aims to liberalise commerce in 40 percent of the world's economy, including the US, Canada, Japan, Australia, Brunei, Chile, Malaysia, Mexico, New Zealand, Peru, Singapore and Vietnam.

"I wanted to get the best possible deal for American workers, and that is what we've done," said US President Obama in his weekly address.

One of the key criticisms of the TPP has been around the secrecy of the negotiations, with the full text of the deal yet to be seen by the public.

"In the coming weeks and months, you’ll be able to read every word of this agreement online well before I sign it,” he said.

“You’ll be able to see for yourself how this agreement is better than past trade deals – and how it’s better for America’s working families.”

Wikileaks has released what it claimed to be the full text of the intellectual property chapter of the TPP.

The Electronic Frontier Foundation, based in US, said their analysis of the leaked text has revealed there will be a large impact on copyright.

Dr Patricia Ranald, convener of the Australian Fair Trade and Investment Network (AFTINET), said the early analysis of the leaked full text showed there was no clarity around how a US proposal to extend a monopoly on life-saving medicines might affect Australia.

"Further analysis will take more time, but the text reveals that the US proposal for an extension of monopolies on costly life-saving biologic medicines from 5 to 8 years is still in the text," she said.

"There is a complex system of provisions in the text which apply differently in different TPP countries Trade Minister Andrew Robb has insisted that Australia has not agreed to immediate extension of monopolies beyond the Australian standard of five years, and that will be no change to Australia’s existing medicines regime. We hope that is the case, but the text is ambiguous. What are the other measures to deliver a comparable market income and how do they apply in Australia?" said Dr Ranald.

Australia's trade minister Andrew Robb dismissed concerns over what the fine print of the deal would reveal.

"Nothing, absolutely nothing will change in the way in which we run our health and pharmaceutical sector." 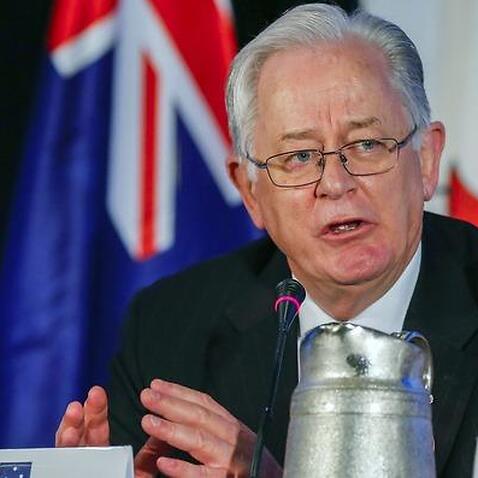 The TPP could reshape industries, change the cost of products from cheese to cancer treatments and have repercussions for drug companies and automakers.

Although ultimate winners and losers from the Trans-Pacific Partnership (TPP) are still unclear, some Republicans are worried about its impact on industries including dairy, tobacco and pharmaceuticals, highlighting the battle ahead to win votes.

"I look forward to working with both parties in Congress to approve this deal -- and grow our economy for decades to come," said Obama, who has to win the support in the Republican-controlled Congress for the pact, which will cut trade barriers and expand access to 40 percent of the world economy. The deal faces skepticism from lawmakers.

'Writing the rules for the global economy'

"With this Trans-Pacific Partnership, we are writing the rules for the global economy. America is leading in the 21st century. Our workers will be the ones who get ahead," said Obama.

Obama and Biden have pushed for the trade deal, arguing it would help the United States increase influence in East Asia and counter the rise of China, which is not part of the pact.

"Without this agreement, competitors that don't share our values, like China, will write the rules of the global economy. They'll keep selling into our markets and try to lure companies over there; meanwhile they're going to keep their markets closed to us. That's what's been going on for the last 20 years," said Obama, adding "it needs to change."

Democratic presidential candidate Hillary Clinton said she rejected the deal, aligning herself with skeptics from labor and environmental groups who argue the deal will kill U.S. jobs. In his address, Obama spoke about those who are against the deal, saying "those who oppose passing this new trade deal are really just accepting a status quo that everyone knows puts us at a disadvantage."

Obama has said he is confident the deal will pass Congress, but he will need to count on Republicans for support. Republican Senator Orrin Hatch, the influential chairman of the Senate Finance Committee, has already said his colleagues have concerns and "quite a few" votes could be lost.

Full text of TPP deal to be released within 30 days

Obama said the White House will post the hefty text of the document on a website in the next few weeks, so people can learn about its details.

US Trade Representative Michael Froman said it is hoped the full text of the Pacific trade deal will be released within the next 30 days.

"The lawyers are working right now to finalize the text and to prepare it for release. We hope to get it out within the next 30 days," Froman said in an interview with CNN's Fareed Zakaria GPS, to be broadcast on Sunday, according to a transcript.

Under a timetable laid out by the U.S. Congress, the text of any trade deal should be made public 30 days after the administration notifies Congress that it intends to sign it. President Barack Obama can sign the deal 60 days after the text is made public.

Too many unanswered questions?

Froman also brushed off criticism of the TPP, a central plank of the administration's pivot to Asia, by U.S. Democratic presidential candidate Hillary Clinton.

Clinton, who backed the developing trade pact when she was secretary of state during Obama's first term, said on Wednesday:

"The bar here is very high and, based on what I have seen, I don't believe the agreement has met it."

Froman said he did not want to comment on presidential politics but said the deal was of a "very high standard."

"I'm convinced as the people sit down and take the time to go through it in detail, that they'll come to a positive judgment," he said.