The US broke its daily record for new coronavirus cases on Friday, which was set just a day earlier. 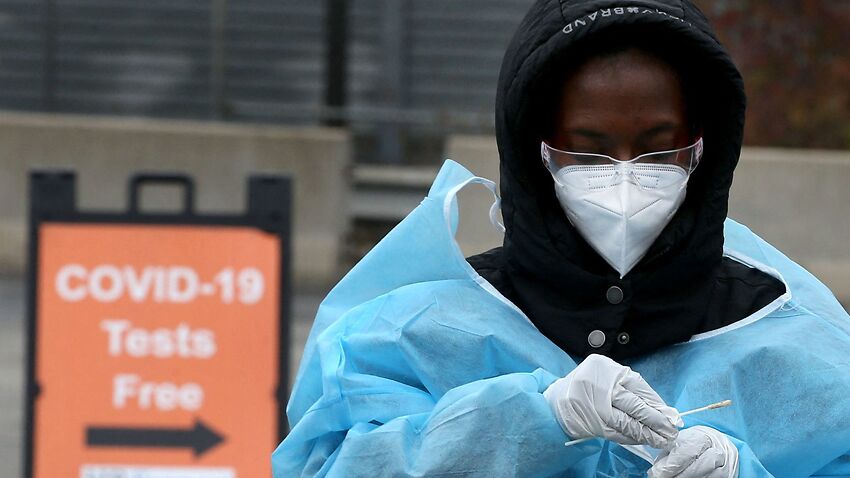 A health worker places a cotton swab into a tube after administering a COVID-19 test at the Foreman Mills Shopping Center in Chicago on Oct. 19, 2020 Source: ABACA

The United States notched a record number of newly reported coronavirus infections for the second day in a row on Friday, passing nine million cases days before the nation chooses its next president.

The US reported a record 94,125 new cases in the 24 hours up to 8:30pm Friday ET, according to a tally run by Johns Hopkins University.

That broke the record of more than 91,000 cases set just one day earlier.

With the virus spreading most rampantly in the Midwest and the South, hospitals are also filling up again, stretching the health care system just as the nation heads into flu season.

"We are not ready for this wave," Ashish Jha, dean of the Brown University school of public health, warned on ABC's Good Morning America on Thursday.

But a judge's attempt to shut down non-essential businesses in the city has been challenged by the mayor and the state's attorney general, the Washington Post reported.

Midwestern state Wisconsin has also set up a field hospital in recent weeks, and hospital workers in Missouri were sounding warning bells as cases there rise.

Hospitals in the western state of Utah were preparing to ration care by as early as next week as patients flood their ICUs, according to local media.

The US has seen a resurgence of its COVID-19 outbreak since mid-October.

The pattern of the pandemic so far shows that hospitalisations usually begin to rise several weeks after infections, and deaths a few weeks after that.

More than 229,000 people have died of the virus in the US since the pandemic began, the Hopkins tally showed as of Friday afternoon, with the daily number of deaths creeping steadily upwards in recent weeks also - though at present it remains below peak levels.

For months public health officials have been warning of a surge in cases as cooler fall weather settles over the US, driving more people indoors.

As the weather changes, New York and other parts of the northeast, which were the epicentre of the US outbreak in the spring but largely controlled the virus over the summer, were reporting a worrying rise.

Rural areas, which in the spring appeared to be getting off lightly compared to crowded cities, were also facing spikes with states like North Dakota charting one of the steepest rises in recent weeks.

The state is so overwhelmed that earlier this month it told residents they have to do their own contact tracing, local media reported.

With four days to go until the election, Donald Trump is battling to hold on to the White House against challenger Joe Biden, who has slammed the president's virus response.

"It is as severe an indictment of a president's record as one can possibly imagine, and it is utterly disqualifying," Mr Biden said Friday as the toll passed nine million.

Mr Trump downplays the virus even as the toll has been accelerating once more, holding a slew of rallies with little social distancing or mask use.

He has repeatedly told supporters that the country is "rounding the curve" on COVID infections.

But Americans, wary of crowded polling booths on Election Day as the virus spreads, are voting early in record numbers.