President Barack Obama has met privately for an hour with families of victims of a mass shooting at a community college in Oregon, telling reporters afterward that the United States has to figure out how to stop these shootings from happening.

President Barack Obama, in a ritual that has become both familiar and frustrating to him, traveled to Oregon on Friday to console families of the victims of a community college shooting that once again sparked a push for U.S. gun reform.

The president, a Democrat who tried but failed to tighten firearms laws after previous mass shootings, arrived in a community where support for gun rights remains strong despite the deaths of 10 people, including the gunman, in the deadliest massacre on U.S. soil in two years.

As his motorcade drove into town, supporters and protesters lined the streets with signs such as "Not giving up our rights," "Please leave us in peace" and "Gun-free zones are for sitting ducks." 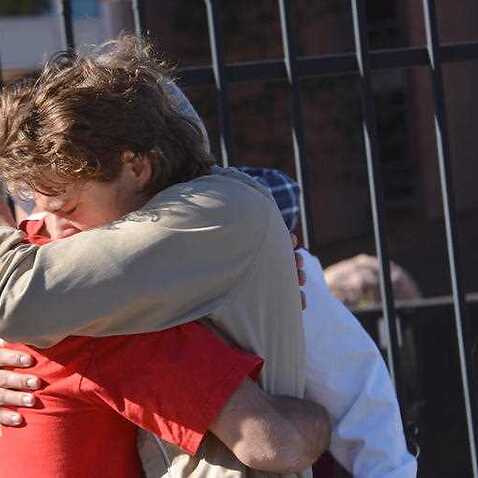 Gunman kills one, wounds three in US university shooting

Obama met privately for about an hour with the families at a local high school.

Speaking to reporters afterwards, he said he had "strong feelings" about the issue of gun control and said the country needed to come together to prevent such shootings from happening in the future. But he did not show the same anger he has previously, saying the day was about the families.

"Obviously, in moments like these, words aren't going to bring their loved ones back," he said.

"When you talk to these families, you’re reminded that this could be happening to your child, or your mom, or your dad, or your relative, or your friend. And so we're going to have to come together as a country to see how we can prevent these issues from taking place."

Last week the president furiously denounced the killings as a symptom of a political choice by U.S. lawmakers to bow to pressure from the powerful National Rifle Association lobby group instead of reforming gun laws. Obama has made regular trips to funerals and memorial services for victims of mass shootings during the past seven years as president. He has said the December 2012 shooting at the Sandy Hook elementary school in Newtown, Connecticut, was his toughest day as president.

His trip came on the same day as another school shooting, this one in Arizona, where an 18-year-old student killed a classmate and wounded three other students on a university campus.

About 250 people gathered in Roseburg, some driving for hours, to protest Obama's visit on Friday.

"The way things played out with Sandy Hook and the president parading those families across the country to take away my gun rights - that is why I'm here," said Jason Harju, 40, who was wearing a .40 caliber Smith & Wesson handgun on his belt and a sweatshirt that said "OREGUN."

"He's using us to politicize this shooting. He's trying to get guns taken away," said Willie Windon, 56, a retired U.S. Army veteran.

Obama has tasked White House lawyers and advisers to look for new ways he could use his executive powers to enforce existing gun regulations.

One of those options is a regulatory change to require more dealers to get a license to sell guns, which would lead to more background checks on buyers - an action that Democratic presidential candidate Hillary Clinton said she would take if elected in November 2016.

The White House had drafted a proposal on that issue in 2013, but was concerned it could be challenged in court and would be hard to enforce.

But officials are now hopeful that they can find a way to advance the plan, a White House official said on Friday.