Donald Trump will continue carrying out his presidential duties while he recovers from the virus at the White House, his top physician said. 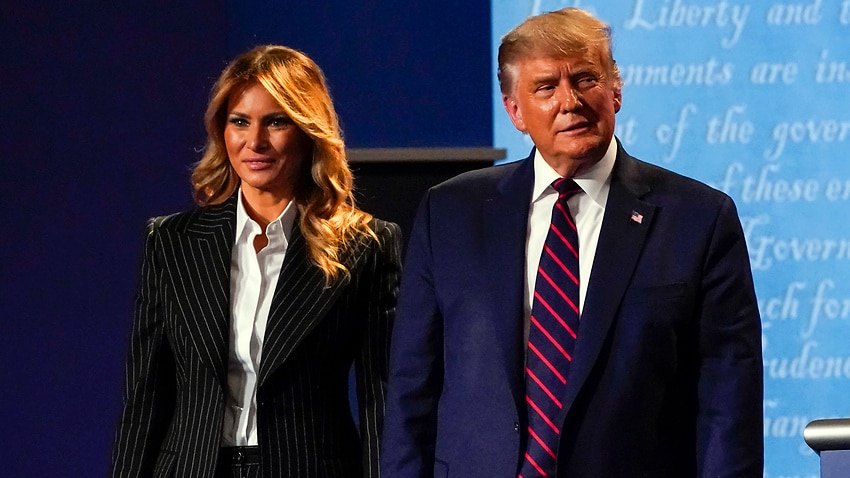 United States President Donald Trump and his wife Melania have tested positive for COVID-19, just one month out from the presidential election.

Mr Trump confirmed the positive tests on Twitter on Thursday night, hours after it was revealed one of his top aides, Hope Hicks, had contracted the virus.

The President and First Lady Melania Trump were tested following Ms Hicks' diagnosis and had begun quarantining at the White House while awaiting their results.

"We will begin our quarantine and recovery process immediately," Mr Trump said in the late-night tweet. "We will get through this TOGETHER".

A statement from the White House's top physician said Mr Trump would continue carrying out his presidential duties while recovering in isolation.

"The President and First Lady are both well at this time, and they plan to remain at home within the White House during their convalescence," the statement read.

"The White House medical team and I will maintain a vigilant watch, and I appreciate the support provided by some of our country's greatest medical professionals and institutions."

The US election is set to take place on 3 November, while the second presidential debate against Democratic challenger Joe Biden is scheduled for just under two weeks away. Given a 14-day quarantine is required of someone with COVID-19 in the US, it appears unlikely the event will be able to proceed as planned.

Karen and I send our love and prayers to our dear friends President @realDonaldTrump and @FLOTUS Melania Trump. We join millions across America praying for their full and swift recovery. God bless you President Trump & our wonderful First Lady Melania.

A campaign rally planned for Friday in the crucial swing state of Florida was also immediately cancelled by the White House, while a scheduled trip to Wisconsin, another battlefield state, this weekend is also unlikely to go ahead.

Both Mr Trump and the First Lady had spent time with Ms Hicks this week, including while travelling on Air Force One to Cleveland for the first presidential debate on Wednesday.

Ms Hicks was also with the President on board the Marine One helicopter when he flew back to the White House after a rally in Minnesota. A number of Mr Trump's close family members, including his daughter Ivanka Trump, her husband Jared Kushner, and his sons Eric and Donald Trump Jr, have also had close contact with Ms Hicks, according to MSNBC.

Mr Trump is 74 years old, placing him in the high-risk category for COVID-19.

More than 200,000 Americans have died of the virus, with 7.2 million infections recorded across the country.

US President Donald Trump and Vice-President Mike Pence are photographed together on Monday, 28 September. Source: AAP

Vice-President Mike Pence will take over the top job if Mr Trump becomes too ill to manage the country, or in the event that he dies.

Mr Pence said he was praying for the President and First Lady's full recovery. "God bless you President Trump and our wonderful First Lady Melania," he wrote in a tweet on Thursday.

British Prime Minister Boris Johnson, who was admitted to intensive care with COVID-19 earlier this year, also wished the couple a "speedy recovery".

My best wishes to President Trump and the First Lady. Hope they both have a speedy recovery from coronavirus.

Director-General of the World Health Organization, Tedros Adhanom Ghebreyesus, echoed a similar message, wishing them a "full and speedy recovery".

The President has been widely criticised for some of his public comments regarding the COVID-19 pandemic, which included musing on whether injecting disinfectants into the body could treat the disease earlier this year.

More recently, an audio recording revealed that Mr Trump had told a journalist he had "played down" the threat of the virus in March because he didn't want to cause panic.

Questions have also been raised over his decision to hold large campaign rallies where few of the audience members have been seen wearing masks.

President Trump has previously criticised for presenting mixed-messages about the importance of wearing masks. Source: AAP

During Wednesday's debate, Mr Trump - who has been criticised for questioning the efficacy of wearing a face-covering - produced a mask from his pocket, saying, "I wear masks when needed".

He appeared to mock Mr Biden for often wearing them, stating: "I don't wear masks like him. Every time you see him, he's got a mask. He could be speaking 200 feet away from them and he shows up with the biggest mask I've ever seen."

Audience members at the much-anticipated debate were required to socially distance and wear face masks - with the notable exception of Mr Trump's family members who were photographed in the crowd without a face covering.