The US Food and Drug Administration has issued an upbeat briefing about the Moderna COVID-19 vaccine ahead of a meeting by experts on whether to grant it emergency approval. 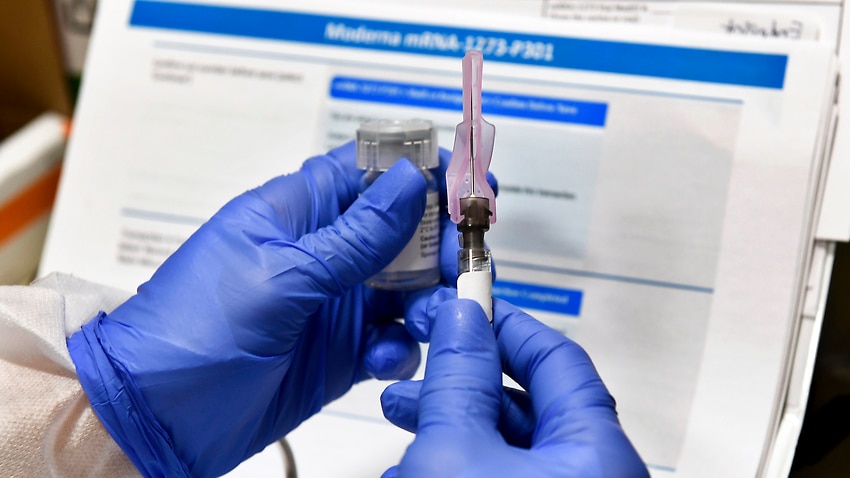 A file image of the Moderna coronavirus vaccine Source: AAP

The US regulator on Tuesday released new data confirming Moderna's COVID-19 vaccine was safe and effective, a strong sign that it could receive emergency approval in days and be ready to roll out by next week.

The Food and Drug Administration said there were "no specific safety concerns identified that would preclude issuance of an EUA (emergency use authorisation)" and confirmed an overall efficacy of 94.1 per cent.

Distribution of the Pfizer-BioNTech vaccine began on Monday and if the FDA green lights Moderna's, rollout of some six million doses could start next Monday.

That would represent a powerful second weapon against the virus in the worst-hit country in the world, where more than 300,000 people have died from COVID-19 and a winter surge continues across much of the country.

Moderna is just behind Pfizer and its German partner BioNTech – which applied for emergency approval on 20 November – in seeking to begin vaccinations in the US Source: AAP

The FDA document offered the clearest look yet into the Moderna vaccine, which was co-developed with the National Institutes of Health (NIH).

On Thursday, an independent group of scientists will convene to debate everything known so far about the product, which Moderna and the NIH began developing in January using cutting-edge mRNA technology.

The panel is expected to vote in favor of an EUA, and the FDA normally acts upon its recommendations.

According to the new data release, the two-dose regimen protected younger people slightly better than it did older people.

Importantly, of 30 cases of severe COVID-19, all occurred in the placebo group.

The FDA also looked at detailed safety data, at a median of nine weeks after participants had received the second shot, which is taken 28 days after the first.

View Moderna’s briefing document for our COVID-19 vaccine here: https://t.co/B9OCofrXgg. This data will be discussed at Thursday’s meeting of the FDA’s Vaccines and Related Biological Products Advisory Committee (VRBPAC).

Few of these effects were classed as "severe" and when they were that tended to occur more in the young than in the old.

There was an imbalance in allergic or inflammatory reactions by the immune system which occurred in 1.5 per cent of the vaccinated population compared to 1.1 per cent of the non-vaccinated.

But there were none that were classed as severe or anaphylactic.

Throughout the follow-up period to date, there have been three reports of Bell's palsy, a facial paralysis condition, in the vaccine group and one in the placebo group.

The Pfizer trial saw four people get Bell's palsy in the vaccine group, and none in the placebo group.

A nurse prepares an experimental vaccine for COVID-19 developed by the National Institutes of Health and Moderna Inc. at the United Health Services facility. Source: AAP

In both cases, the FDA said there was insufficient information to determine that the vaccine was the cause of this paralysis, which normally resolves within three months.

Andrew Morris, a University of Toronto professor of medicine who has studied the condition, told AFP however "it is becoming increasingly likely that there is an important relationship with Bell's (facial) palsy."

"The absolute risk, in light of the risks associated with COVID-19, is small," he stressed.

The frequency of life-threatening events was low, around one per cent in each group, and there was no suggestion that the vaccine was the cause.

Both the Pfizer and Moderna vaccines use mRNA (messenger ribonucleic acid) which makes human cells express a surface protein of the new coronavirus.

This simulates an infection and trains the immune system to be ready in case it encounters the real virus.

The mRNA is encased inside fatty particles.

BREAKING: An FDA analysis finds Moderna's #COVID19 vaccine 94.5% effective: 96% for those age 18-64, and 86% for those age 65 or older. FDA advisory meeting vote in a few days and potential emergency authorization later this week. https://t.co/GFBZMkXpJs

The US hopes to immunise 20 million people this month, with health care workers and long-term care residents at the front of the line.

Authorities want to reach the rest of the population by summer, but much will depend on vaccine confidence. Experts estimate more than 70 per cent of people will need to be vaccinated to bring the outbreak to a close.