The party's new House conference chair, Elise Stefanik, has made clear that Trumpism will remain vital in the effort to turn back the "destructive, radical, far-left socialist agenda" of US President Joe Biden and his Democrats.

US Republicans on Friday elected congresswoman Elise Stefanik, an outspoken defender of Donald Trump, as their new House conference chair, as the party scrambles to unify amid an explosive debate about its direction.

Ms Stefanik, a 36-year-old former moderate representing upstate New York, easily overcame a late entrant to the race and won strong support from the Republican conference in a closed-door vote of 134 to 46.

"My focus is on unity, because that's what the American people and that's what our voters deserve," she told reporters after vaulting into the number three House Republican position - becoming the party's most powerful woman in Congress.

"We are going on offence and are going to win back the majority in 2022" in the House of Representatives, said Ms Stefanik, the party's new top messenger.

Thank you to my colleagues for electing me to serve as House Republican Conference Chair and to my constituents across #NY21 for their outpouring of support!

I am excited to lead our unified team alongside @GOPLeader & @SteveScalise to combat Biden and Pelosi’s Far-Left agenda! pic.twitter.com/P2ImMLGuwq

The vote came two days after the conference ousted Liz Cheney, a conservative stalwart and daughter of former vice president Dick Cheney, from the post over her repeated criticism of Mr Trump and her refusal to embrace his false claim that Democrats stole the 2020 election.

With Mr Trump retaining enormous influence, Republicans have been desperate to tamp down swelling discord within party ranks over its future.

Conservatives aim to craft a coherent message heading into next year's midterm elections, but some Republicans fear that failing to reject Mr Trump's rhetoric about voter fraud could hurt the party at the polls.

But Ms Stefanik made clear that Mr Trump and Trumpism will remain vital in the effort to turn back the "destructive, radical, far-left socialist agenda" of President Joe Biden and his Democrats.

Mr Trump "is a critical part of our Republican team," Ms Stefanik said.

Mr Trump, whose grip on the party has tightened with Ms Stefanik's elevation, immediately congratulated her for the "overwhelming" win.

"The House GOP is united and the Make America Great Again movement is Strong!" the former president said.

Thank you President Trump for your early and unwavering support! I look forward to working together to defeat the Democrats' Socialist agenda! 🇺🇸 pic.twitter.com/0EUQxEAJUT

Ms Stefanik's ascension to leadership was the singular bright spot for Republicans in an otherwise difficult week.

On Thursday after a meeting with Mr Biden and top congressional Democrats at the White House, House Minority Leader Kevin McCarthy made the dubious assertion that "I don't think anybody is questioning the legitimacy of the presidential election."

One day earlier during a contentious House hearing, Republicans sought to downplay the seriousness of the deadly 6 January attack on the US Capitol by Trump supporters, with congressman Andrew Clyde saying footage from the day of the insurrection appeared to show "a normal tourist visit" to the building. 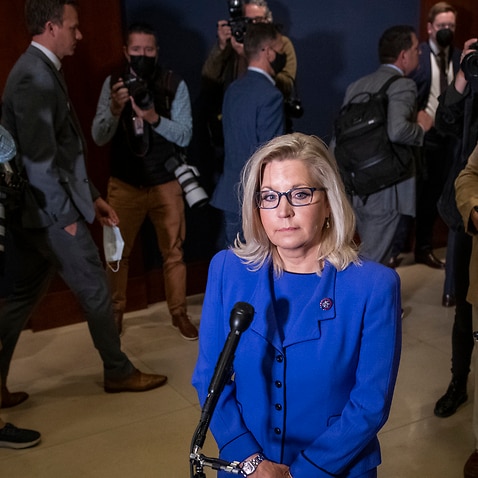 Ousted from leadership, Ms Cheney has vowed to continue fighting for conservative principles and against a defeated leader who keeps spreading "the big lie" of voter fraud.

Ms Stefanik is unapologetic in her defence of Mr Trump and has promoted the ex-president's falsehoods about the 2020 election, but some Republicans have openly questioned her conservative credentials.

She voted against Mr Trump's 2017 tax plan, dismissed his border wall as not "realistic" and worked hard to build a more diverse party and get more Republican women elected to Congress.

While the congressman who challenged Ms Stefanik for the conference chair post, Texas Republican Chip Roy, received a 100 percent lifetime rating from the Club For Growth, the conservative group gave Ms Stefanik a rating of just 35 percent.

Despite the pushback, Ms Stefanik on Friday branded herself a "proud conservative Republican." 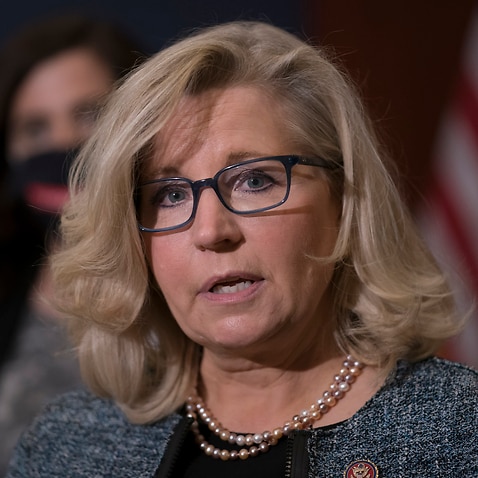 Asked whether there was a place in the party for vocal Trump critics like Ms Cheney or congressman Adam Kinzinger - both of whom voted to impeach Mr Trump in January - Ms Stefanik sought to strike a unifying note.

"They are part of this Republican conference," she said, then added: "We are unified in working with president Trump."