US Senator John McCain lashed out Thursday at Turkey, calling for the ambassador's expulsion after violence erupted between Turkish security personnel and demonstrators during a Washington visit by President Recep Tayyip Erdogan.

"We should throw their ambassador the hell out of the United States of America," McCain, who heads the Senate Armed Services Committee, told MSNBC.

"This kind of thing can not go unresponded to diplomatically," he said, adding that legal action could be pursued.

"This isn't Turkey, this isn't a third world country."

US officials expressed outrage after what they described as a "brutal attack" Tuesday by Erdogan bodyguards on a small group of pro-Kurdish protesters who gathered on the US capital's "Embassy Row" after Erdogan met with President Donald Trump at the White House. Close-up footage shared on social media showed Turkish officials dressed in suits beating and punching people in the crowd and, in at least one case, kicking out at a woman splayed on the ground.

The Turkish Embassy on Thursday released a statement on the violence. It made no mention of Turkish security personnel, and blamed the unrest on demonstrators supporting the PKK, a group "which the US and Turkey have designated as a terrorist organisation."

"The demonstrators began aggressively provoking Turkish-American citizens who had peacefully assembled to greet the president," the embassy said. "The Turkish-Americans responded in self-defense and one of them was seriously injured."

McCain laid blame directly at the feet of Turkish officials.

"This is Erdogan's security detail. Somebody told them to go out there and beat up on these peaceful demonstrators," he said.

"I think it should have repercussions, including identifying these people and bringing charges against them. After all they violated American laws."

Most Turkish Australians voted ‘NO’ in Turkey referendum 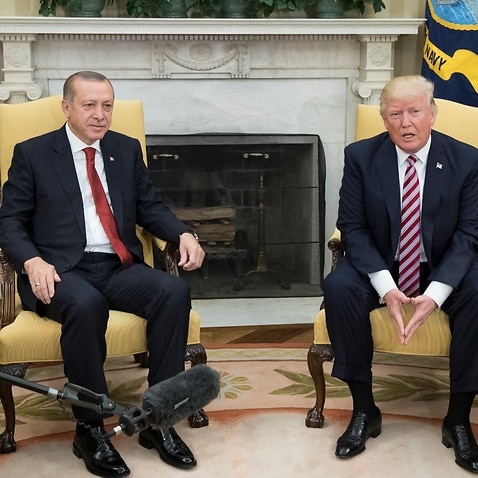