The US trade agency has confirmed President Donald Trump's higher tariffs on $US300 billion worth of Chinese goods will proceed as previously announced.

The US Trade Representative's office has reaffirmed President Donald Trump's plans to impose an additional five per cent tariff on a list of $US300 billion ($A445 billion) of Chinese imports starting on 1 September and 15 December.

The USTR said in an official notice that on 1 September, US Customs and Border Protection agency will begin collecting a 15 per cent tariff on a portion of the list that contains over $US125 billion of targeted goods from China, including smartwatches, Bluetooth headphones, flat-panel televisions and footwear. A 15 per cent tariff will be levied on the remainder of the list, which includes mobile phones, laptop computers, toys and clothing, from 15 December, the agency said in the Federal Register filing.

The Trump administration had previously planned to impose a lower 10 per cent tariff on the $US300 billion of imports, which represents nearly all the remaining US imports from China yet to be hit with punitive US tariffs.

Mr Trump announced the tariff increase last Friday on Twitter in response to Chinese retaliatory tariffs on $US75 billion worth of US goods, including crude oil, escalating the protracted trade war between the world's two largest economies. 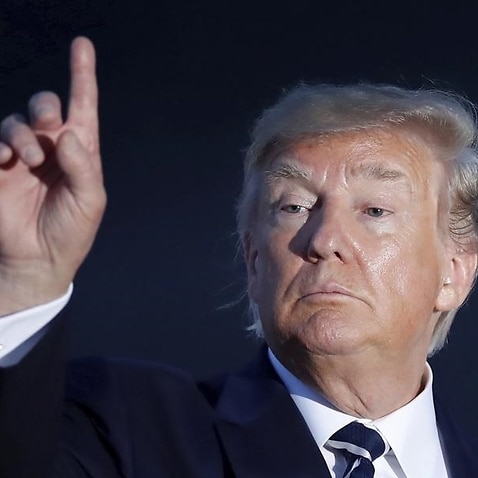 The Federal Register notice, however, did not mention Mr Trump's announcement of his intention to increase the duty to 30 per cent on a separate list of $US250 billion of Chinese imports from 1 October, that are already being taxed at 25 per cent.

A USTR spokesman said the 1 October tariff increase, along with a process for collecting public comments on it, will be detailed in another Federal Register notice.

"China's most recent response of announcing a new tariff increase on US goods has shown that the current action being taken is no longer appropriate," USTR said in the notice posted to a government website on Wednesday. Donald Trump at the G7.
AAP

The Trump administration has, for two years, been trying to persuade China to eliminate unfair trade practices and make sweeping changes to its policies on intellectual property protection, forced transfers of technology to Chinese firms, industrial subsidies and market access.

The US-China trade dispute in July 2018 boiled over into tariffs on hundreds of billions of dollars' worth of each other's goods and threatens to engulf all trade between the countries, putting global growth at risk.

USTR accuses China of "unfair acts, policies and practices", including its retaliatory tariffs and "concrete steps to devalue its currency", allegations denied by Beijing.

The US Treasury earlier this month declared China a currency manipulator.

"In short, instead of addressing the underlying problems, China has increased tariffs and adopted or threatened additional retaliation to further protect the unreasonable acts, policies, and practices identified in the investigation, resulting in increased harm to the US economy," USTR said in the notice.