Vanuatu rules out Chinese military base

Vanuatu has told Australia it was "never dreaming" of allowing China to build a military base on its shores. 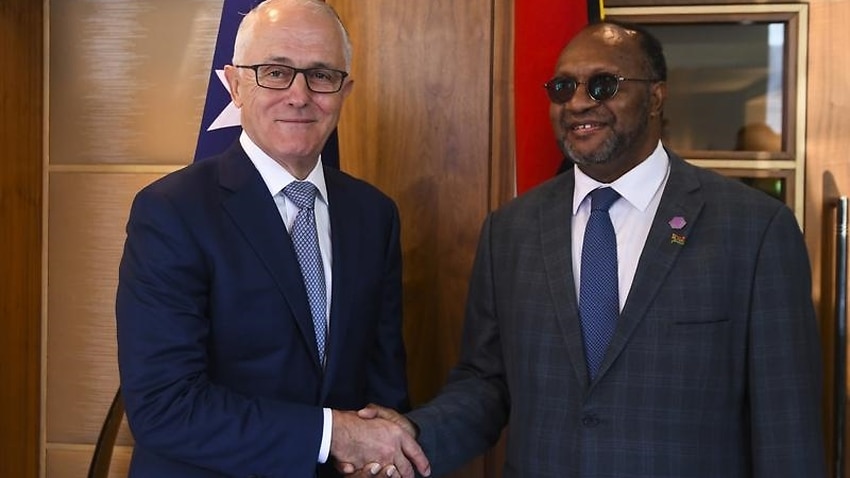 Charlot Salwai (right) promised Malcolm Turnbull there are no plans for a Chinese base in Vanuatu. (AAP)

Vanuatu has ruled out ever allowing China to build a military base on its shores, assuring Australia the idea has never been raised.

Mr Salwai said he had worked in government for 27 years, as an adviser and MP, and the idea of a Chinese military base had never been raised.

"I attend a lot of meetings, was ever (sic) in our discussion. Was never in our negotiations," he told reporters in London on Wednesday.

Mr Salwai ruled out any plans for a Chinese base in his country, and said he raised it with Mr Turnbull in their bilateral meeting.

"I want to assure the prime minister that Vanuatu was never dreaming to become a military base one day," he said.

"We are the happiest people, and I think that's enough for us."

China is building a wharf in Vanuatu funded by a concessional loan, but Mr Salwai said the loan was cheaper than the one Japan offered when the Port Vila wharf was built.

China has said reports it wants a military base in Vanuatu are "sheer fiction" from troublemakers.

"The prime minister of Vanuatu has made it very clear, quite unequivocally, that the media reports about Chinese interest in establishing a military base in Vanuatu have no basis in fact," Mr Turnbull told reporters.

"He said those reports are absolutely untrue."

Mr Salwai thanked Australia for its support in education, health and justice, but said he would like help building the new police academy.

"Because we want to keep Vanuatu as a destination for investors, but also for tourists ... Vanuatu must be ready to be a country of law and order," he said.

The cable will connect Papua New Guinea and the Solomon Islands with Australia.

"That is going to deliver enormous benefits to both countries, but particularly the Solomon Islands, and significantly reduce the cost of telecommunications there," Mr Turnbull said.