Six aftershocks have since been registered, between 2.4 and 4.1 on the Richter scale, and further tremors are expected in coming days and possibly months. 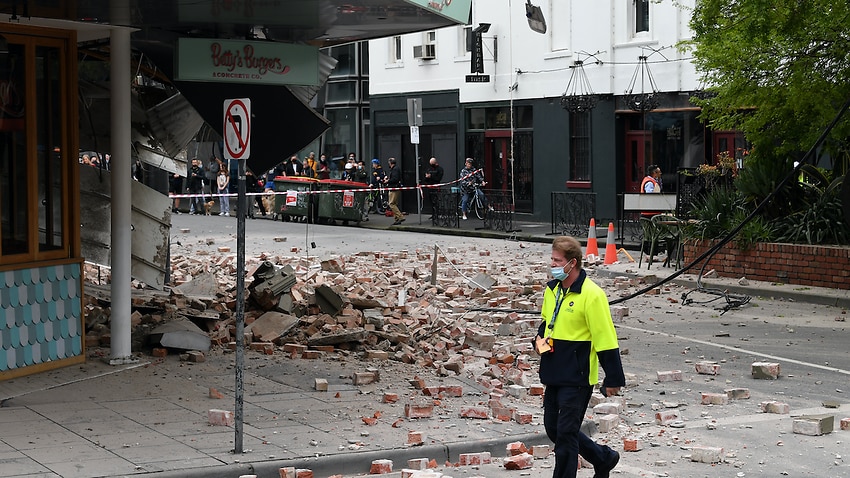 Damage to the exterior of Betty’s Burgers on Chappel Street in Melbourne following the earthquake. Source: AAP

Victoria has been rocked by a magnitude 5.9 earthquake, but authorities say the state escaped with no reported injuries and only minor damage.

The epicentre of the quake, which hit at around 9:15am AEST on Wednesday at a depth of 10km, was in Mansfield, about 180km northeast of Melbourne, Geoscience Australia says.

Tremors were felt across Melbourne and as far away as Sydney, Canberra, Adelaide, and Tasmania.

Six aftershocks have since been registered, between 2.4 and 4.1 on the Richter scale, and further tremors are expected in coming days and possibly months.

"What we have seen as a result of the 5.9 earthquake that affected Victoria today is a range of minor structural damage," State Emergency Service chief officer Tim Wiebusch told reporters in Melbourne.

"We have had just over 100 requests for assistance, 55 in the metropolitan area, largely related to minor structural damage to chimneys and facades on buildings."

Just got sent this video from a friend in Melbourne 😳 pic.twitter.com/SWOpRdirkJ

A magnitude six #Earthquake has rattled Melbourne and regional Victoria.
This is the moment when News Breakfast presenters @mjrowland68 and @Tonaaayy_ were rocked by it. pic.twitter.com/Z4gz0sWJve

State Emergency Service chief officer Tim Wiebusch said it was "fortunate" the epicentre of the quake happened in a largely unpopulated part of regional Victoria.

"If that had occurred in one of our more urban and populated areas, we could be seeing quite a different result," he told reporters.

No major structural issues have been found after checks of rail lines, roads and dams.

Some building damage has emerged in metropolitan Melbourne and areas near Mansfield, with Beechworth hospital losing power and the cross at St Patrick's Church in Wangaratta falling down.

Among the buildings damaged is the facade of a Fitzroy building on Brunswick Road and the exterior of Betty's Burgers on Chapel Street in Windsor.

More than 46 reports of building damage after Victoria earthquake

Victoria’s Deputy Premier James Merlino said Geoscience "has confirmed that there is a possibility that we may receive further aftershocks" and there was a potential risk of more earthquakes.

“Indeed, more aftershocks could occur for weeks, if not months," he told reporters in Melbourne.

The mayor of Mansfield, Mark Holcombe, said the quake was unlike anything he's experienced before in his 20 years living in the town.

"I was sitting down at work at my desk and I needed to run outside. It took me a while to work out what it was," he told the ABC.

"I have been in earthquakes overseas before and it seemed to go on longer than I have experienced before. The other thing that surprised me was how noisy it was, it was a real rumbling like a truck going past."

The Bureau of Meteorology said there was no tsunami threat.

Speaking from the United States after being briefed about the earthquake, Prime Minister Scott Morrison said the federal government stands by “to provide whatever assistance is needed, whether from the [defence force] or others”.

It's understood the earthquake is one of the strongest ever to hit Australia.