The lockdown applies to 10 postcodes in western and northern Melbourne and could affect more than 300,000 people. 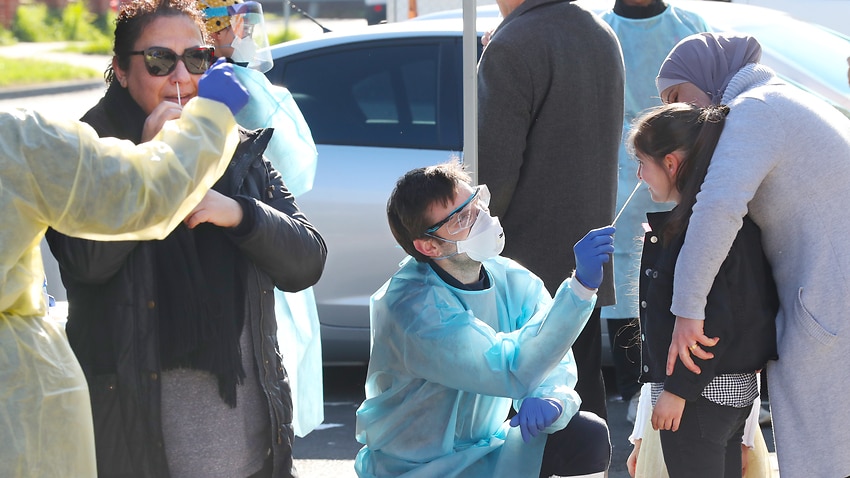 Victoria has ramped up testing in hotspots. Source: AAP

Victorians living in suburbs at the centre of fresh coronavirus outbreaks will only be allowed to leave their house for essential activities from Wednesday night.

Premier Daniel Andrews on Tuesday announced stay-at-home orders would be reimposed on coronavirus hotspots after a 14th-straight day of double-digit growth in new cases.

Under the restrictions, people can only leave their homes for four reasons: to exercise, go to school or work, undertake care responsibilities, and buy food and other essentials.

Victoria reported 64 new cases on Tuesday, taking the total number of cases in the state to 2,159.

Mr Andrews said the number of cases was “unacceptably high” and something that “poses a real threat to all of us”.

Statement from the Premier on local restrictions: pic.twitter.com/d0JbQWHpEx

“We know that suburban lockdowns, stay-at-home orders are a series of restrictions that work,” he told reporters.

Read More
Victoria is considering suburban lockdowns, what could they look like?

More than 300,000 people could be affected by the lockdown, according to Australian Bureau of Statistics population figures for each of the 10 areas.

Mr Andrews said police patrols would be conducted in these postcodes to ensure people were complying with the new orders.

"You shouldn’t be going into those postcodes over the next four weeks unless it is for work, and only for work that you have to do in person," he said.

"We have to limit the number of people who are going in and out of these postcodes and sadly we have to ensure that residents and families within these postcodes do not leave their home other than for those four permitted reasons, and again, only when they need to."

Mr Andrews on Tuesday said he had asked Prime Minister Scott Morrison to divert international flights away from Melbourne for the next two weeks, reducing the burden of returning travellers on Melbourne's quarantine arrangements.

"I will have conversations with other state leaders to explain that and to thank them in advance of the extra load that they will carry," he said.

"That is unacceptable to me," he told reporters.

"I’m sure that will be unacceptable certainly to all of those who will be impacted by the restrictions that we have had to reimpose."

Of the new cases reported on Tuesday, six are part of the Stamford Plaza outbreak and were already in quarantine.

Read More
Queensland will reopen state borders on 10 July, but not to Victorians

There are two new cases linked to Albanvale Primary School and two staff at a delivery service centre, StarTrack in Tullamarine, have tested positive to the virus. Both StarTrack employees worked while infectious and contact tracing is underway.

Five childcare centres will also undergo a deep clean after positive cases were identified there.

Four previous cases have been reclassified, so the total number of cases in the state has risen by 60 to 2,159.

Mr Morrison on Tuesday threw his support behind the lockdown of Melbourne suburbs.

The prime minister has also offered Commonwealth resources to secure the 10 hotspots.

"If indeed a full local lockdown is required in those hotspots, then that's the decision the premier will take," Mr Morrison said.

"And they'll take that decision with the full support and backing through resources from the Commonwealth government, as well as from other states and territories where that is necessary."

“The actions being taken by the Victorian government will save lives,” he told reporters in Canberra.