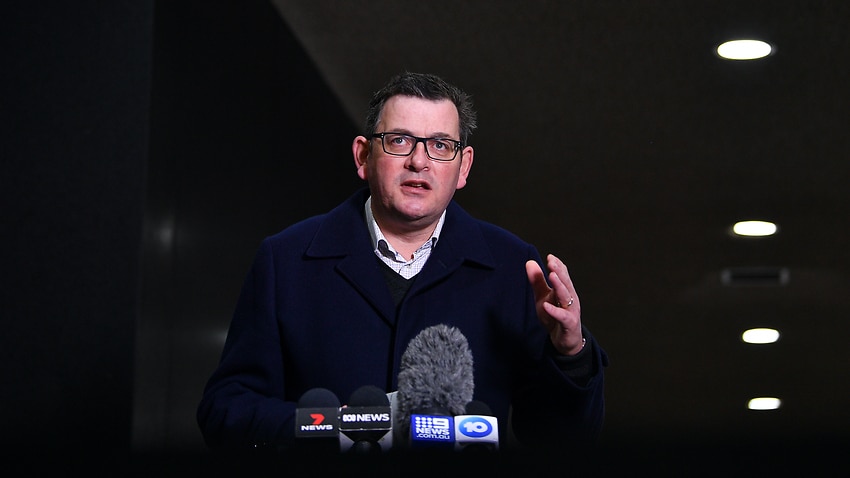 Australia's first drive-through COVID-19 vaccination hub will open at a former Bunnings warehouse in Melbourne, while Victorians under 40 will be offered AstraZeneca jabs at state-run clinics.

The locked-down southern state added 11 locally-acquired infections to its caseload on Sunday, all of them linked to previously reported cases although they were not in quarantine while infectious.

However a localised outbreak in a Melbourne public housing tower appears to have been contained, with residents tested overnight returning negative results.

Premier Daniel Andrews said families isolating on the 17th floor of the tower at 130 Racecourse Road in Flemington have all been tested.

"All returned a negative test result so that's very pleasing," he told reporters on Sunday.

Chief Health Officer Brett Sutton said 17 immediate family members had been cleared as well as an additional 200 residents throughout the complex.

The tower was identified as a tier two location between 3 and 6 August and was previously placed under strict lockdown in early July.

Eight cases were found in a single family within the building on Friday and immediately placed in quarantine.

It is expected batches of 10 cars will be processed at a time and the site will initially have capacity to administer 10,000 jabs a week.

In addition, nine of Victoria's 50 state vaccination clinics will offer AstraZeneca to 18- to 39-year-olds while children aged 12-15 with underlying health conditions or of Aboriginal or Torres Strait Islander decent will also be allowed to receive Pfizer doses.

"There are many appointments available, go online," Mr Andrews urged of anyone considering the AstraZeneca offer.

With the best part of 200,000 vaccinations on hand, anyone within the age group willing to provide informed consent would be able to receive a first AZ dose and a second 12 weeks later, he said.

Echoing the premier encouragement, Professor Sutton said: "I'm a 52-year-old bloke. If I were 25 and AstraZeneca was the only vaccine available to me today, I would get it."

Victoria administered 17,360 vaccine doses in the 24 hours to Saturday evening and conducted 38,179 tests.

With 29 cases recorded on Saturday, there was concern Victoria would be forced to extend its current week-long lockdown beyond Thursday.

However Mr Andrews said on Sunday no decision had been made and he would immediately announce it when one was.

Before then, he said he remained concerned by the two mystery cases behind the latest outbreaks.

"We've just got to monitor this every single day," he said.

"We'll be in lockdown no longer than we need to be and we just have to take this one day at a time."

A man walks along Southbank in downtown Melbourne on August 6, 2021, amid a sixth lockdown for the city in efforts to bring the Delta outbreak to heel. Source: AFP

Prof Sutton said Victoria's latest cases were all linked to Melbourne's Hobsons Bay cluster seeded by a teacher at the Al-Taqwa College.

He said cases at Flemington's Mount Alexander College and the Kiewa Secondary Boys Campus of Ilim College in Dallas were undergoing the same successful testing program conducted at Al-Taqwa College.

Meanwhile, Victoria can expect the first of an additional 150,000 doses of Pfizer vaccine promised by the federal government as soon as Thursday.