The Victorian Premier has taken aim at the NSW Government after its Education Minister banned the showing of a documentary on gay parenting.

Daniel Andrews has lashed out at the NSW Government after it banned a high school viewing of the award winning film Gayby Baby.

Burwood Girls High School had arranged for students to watch the documentary, directed by former student Maya Newell, on Friday morning but the Department of Education stepped in to stop the school being screened during school hours.

Initial reports stated that some parents had complained, but the Department later confirmed to The Guardian that none were received.

Took the family to see #GaybyBaby. Love is the most important thing in any family. All kids need to know that. http://t.co/C8arz19bjG

In a passionate Facebook post, Mr Andrews said the ban was “cruel rubbish” and endorsed the film, which his family saw recently.

“I'm getting really sick of this stuff,” he said.

“Gayby Baby is an award-winning Australian documentary about same-sex parents who are raising beautiful families… Apparently the NSW Government thinks it's all too confusing and distressing a subject for high school students.

“They couldn't be more wrong.”

Mr Andrews said children and teenagers need to know that there are “lots of different kinds of families”.

“Young people who are same-sex attracted often lead a quietly difficult life and they deserve our full support. If you want to talk about things that confuse and distress young people, let's talk about telling thousands upon thousands of them that they aren't ‘normal’.

“If any young person is hurt by all this, please know that I stand with you. I'm on your side. So is the Victorian Government.”

His comments follow those by federal Liberal MP Christopher Pyne, who told the National Press Club on Thursday that he had changed his position to support marriage equality due to the children of same-sex couples. 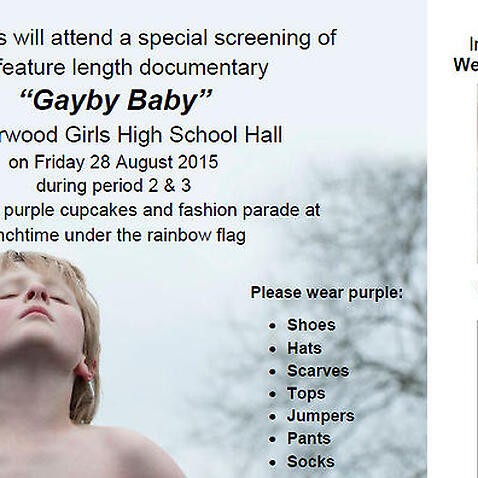 'No parents complained' about school viewing of Gayby Baby

The now cancelled viewing of the film had been organised as part of Wear It Purple Day, an annual event promoting understanding of young LGBTI Australians.

The diversity event was cofounded by another former student of the school.

The school’s prefects also expressed their support for diversity in the wake of the ban.

Posted on a Facebook called Students of Burwood Girls, the students stated that “we pride ourselves on our support of diversity - in whatever form it takes”.

“When it is considered that the LGBTIQ community has the highest rates of suicide of any population in Australia and experience significantly higher rates of mental health issues, we consider our support to be just one small step in creating better understanding in the community,” it read.

“We are proud of the leadership our school shows in supporting all views and the right for all people to be accepted.”