A petition to ban live firearms as film props has reached 15,000 signatures following the death of Halyna Hutchins, who was fatally shot in an accident on set. 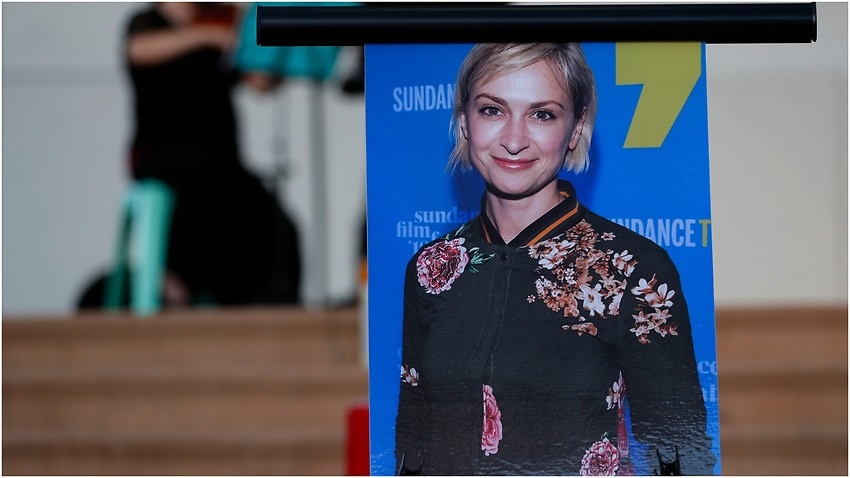 A musician plays a violin behind a photograph of cinematographer Halyna Hutchins during a vigil in her honor in Albuquerque. Source: AAP

Calls were growing on Sunday to ban the use of firearms in movie-making, as Hollywood struggled to come to terms with the fatal on-set shooting of cinematographer Halyna Hutchins.

Hutchins, 42, was struck in the chest when Alec Baldwin fired a prop gun during the filming of the low-budget Western Rust. She died shortly after the incident on Friday (Thursday local time) in New Mexico.

Director Joel Souza, 48, who was crouching behind her as they lined up a shot, was wounded and hospitalised, then released.

Police are still investigating the shooting, which sparked intense speculation on social media about how such an accident could have occurred despite detailed and long-established gun safety protocols for film sets.

A petition on the website change.org calling for a ban on live firearms on film sets and better working conditions for crews had gathered more than 15,000 signatures by Monday.

"There is no excuse for something like this to happen in the 21st century," says the text of the petition launched by Bandar Albuliwi, a screenwriter and director.

Dave Cortese, a Democrat elected to the California Senate, put out a statement on Saturday saying, "There is an urgent need to address alarming work abuses and safety violations occurring on the set of theatrical productions, including unnecessary high-risk conditions such as the use of live firearms."

He said he intends to push a bill banning live ammunition on movie sets in California.

The hit Los Angeles police drama The Rookie decided the day after the shooting to ban all live ammunition from its set, effective immediately, according to industry publication The Hollywood Reporter.

Baldwin, who has spoken of his heartbreak after the killing, is cooperating with the police investigation.

The probe has focused on the specialist in charge of the weapon and the assistant director who handed it to Baldwin, according to an affidavit seen by AFP.

Cinematographer Halyna Hutchins on the set of "Archenemy" in January 2020 in Los Angeles. Source: Adam Egypt Mortimer via AP

A distraught Baldwin was photographed outside a hotel in Santa Fe, New Mexico, on Sunday (Saturday local time) embracing and talking with Matt Hutchins, the husband of Halyna Hutchins, and their nine-year-old son.

Baldwin, 63, on Saturday said he was shocked and heartbroken at the death of Hutchins.

In a statement read to a candlelight vigil on Saturday, Hutchins called his wife's death "an enormous loss."

A second vigil is planned in the Los Angeles area on Monday (Sunday local time).