The head of Russians lower house of parliament has accused opposition leader Alexei Navalny of working for Western security services.

The head of Russia's lower house of parliament has accused "shameless" opposition leader Alexei Navalny of working for Western security services and said President Vladimir Putin had saved his life.

Duma chairman Vyacheslav Volodin's remarks on Thursday came after 44-year-old Mr Navalny accused Mr Putin of orchestrating his poisoning in the anti-corruption campaigner's first published interview since he left the German hospital where he was treated.

"I assert that Putin is behind this act, I don't see any other explanation," he told the German weekly Der Spiegel. Mr Volodin said the Russian President had "saved" Navalny's life after the opposition figure was poisoned with what Germany says was a Soviet-designed nerve agent, Novichok, and accused the Kremlin critic of working for Western security services.

"Navalny is a shameless and mean man," Mr Volodin said in a statement released by the lower house of parliament.

"Everyone - from pilots to doctors to the President - were sincerely saving him," he added. 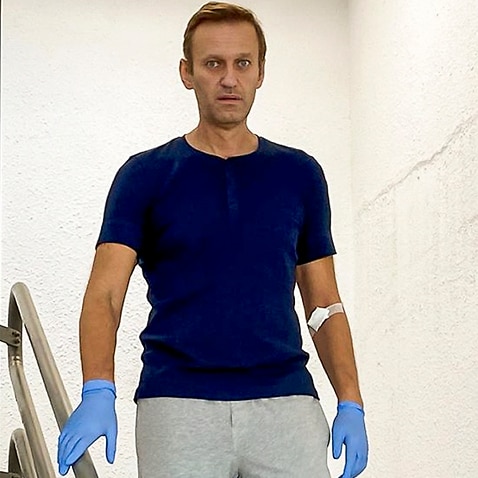 "Only a dishonourable man can make such statements," he said in an apparent reference to Mr Navalny's claim that Mr Putin was behind the poisoning.

"It is absolutely obvious that Navalny is working with the security services and authorities of Western countries."

Mr Navalny was evacuated to Berlin for treatment after he collapsed in August on a flight from Tomsk to Moscow after a campaign trip to support opposition candidates in local elections. The Kremlin critic was discharged just over a week ago.

Mr Navalny also vowed to return to Russia as soon as he has fully recovered, saying he would not give Mr Putin the pleasure of being in exile.