Rescue services in Aleppo are calling the international community to move civilians four kilometres to safety amid unverified reports of mass executions and other atrocities in Aleppo.

Rescue and medical services in war-ravaged Aleppo have called on the "world's most powerful communities" to help civilians reach safety as they described how 100,000 are trapped in a small space amid continual bombings and "advancements on the ground".

"For years our humanitarian volunteers have worked to save the lives of our people in Aleppo," a statement signed by Syria Civil Defence (also known as the White Helmets), Independent Doctors Association and Syrian American Medical Society read.

"We are calling on you in the international community to provide a safe passage out of Aleppo."

The services said in the early morning of Tuesday (local time), 100,000 civilians were trapped in an area of "five square metres" (sic) as bombs, shellings and ground advancements continued around them.

They said five hundred people were taking shelter in one building and people had been underground for days. "We cannot believe that the world's most powerful countries cannot get 100,000 souls four kilometres to relative safety."

We can't believe the world's most powerful countries can't get 100.000 civilians to safety that is 4 KM away! #SaveAleppo pic.twitter.com/RAvyRHJeO0

Rebel forces have lost 90 per cent of their stronghold in the city, retreating to neighbourhoods in southeast Aleppo including Sukkari and Mashhad, according to the Syrian Observatory for Human Rights monitor and a military official.

Lieutenant General Zaid al-Saleh, head of the Government's Aleppo security committee, told reporters in the recaptured Sheikh Saeed district of the city that the regime expects "the battle in eastern Aleppo should end quickly.

"They [the rebels] don't have much time. They either have to surrender or die."

However, rebels still control other parts of the country and IS has just reclaimed the ancient city of Palmyra. UN secretary-general Ban Ki-moon said while the UN had not yet independently verified reports of atrocities, including mass executions, he was very perturbed.

In a statement, a spokesperson for Ban Ki-moon said: "The secretary-general is conveying his grave concern to the relevant parties.

"He has instructed his Special Envoy for Syria to follow up urgently with the parties concerned."

Ammar al Selmo, Syria Civil Defence chief, said in a statement that there were more than one hundred corpses, "and others who could be still alive under the rubble whom no one is able to get to."

#Syria: Mass execution of all staff of an E #Aleppo hospitalhttps://t.co/mJN61AYw8K pic.twitter.com/l6uDdmeqlC

Washington Post Syria correspondent Louisa Loveluck said she had heard the regime was conducting executions through the city in recent hours.

No way of verifying yet, but reports are emerging from newly captured areas of #Aleppo of several mass executions & burnings alive. #Syria

Rescue service White Helmets expressed its dismay it was unable to help civilians because of perpetual bombing.

There is no total number of casualties in Besieged #Aleppo today, all streets & destroyed buildings are full with dead bodies. It's hell.

We hear children crying, we hear calls for help, but we just can't do anything. We're being bombed continuously. #SaveAleppo

"The battle of Aleppo has reached its end. It is just a matter of a small period of time... it's a total collapse," said Observatory director Rami Abdel Rahman.

Displaced civilians -- many hungry after fleeing without food -- sat on pavements or lay on the street with nowhere else to go, they said.

An AFP correspondent in the government-held west of Aleppo said the bombardment of rebel areas could be heard and was among the heaviest in recent days.

"The regime is advancing in east Aleppo under gunfire, missiles and shelling," Bassam Mustafa from the political office of the Nureddin al-Zenki rebel group in Aleppo told reporters.

"The fighters (rebels) are retreating under pressure and the situation is very bad," he said.

American freelance journalist and film maker Bilal Abdul Kareem posted a message on social media, warning it might be his last.

Perhaps my final message from E. Aleppo. Regime forces are closing in and bunker busters are raining down. pic.twitter.com/XgK0DSa08x

The mother of seven-year-old tweeter Bana Alabed also posted from her daughter's account that little help was being extended to residents.

Final message - I am very sad no one is helping us in this world, no one is evacuating me & my daughter. Goodbye.- Fatemah #Aleppo Buildings were missing entire sections, and roads were littered with rubble and pitted with enormous craters.

Terrified residents have poured out of rebel-held neighbourhoods as the army advanced since beginning its operation on November 15.

The Observatory said Monday another 10,000 people had fled rebel areas in the previous 24 hours, bringing the total number of those who have left -- mostly to government-held territory -- to 130,000.

Syria's rebels seized control of east Aleppo in 2012, a year into an uprising that began with anti-government protests but spiralled into a civil war after a regime crackdown.

The war has become a complex multi-front conflict, drawing in proxy powers and jihadists such as the Islamic State group, which on Sunday retook the symbolically important city of Palmyra nine months after being expelled.

IS managed to again seize control of Palmyra -- where the jihadists carried out a campaign of destruction against famed ancient ruins -- despite heavy Russian air strikes and the arrival of Syrian troop reinforcements.

On Monday, the jihadists were advancing south and west of Palmyra, clashing with the army near the town of Al-Qaryatain, the Observatory said. 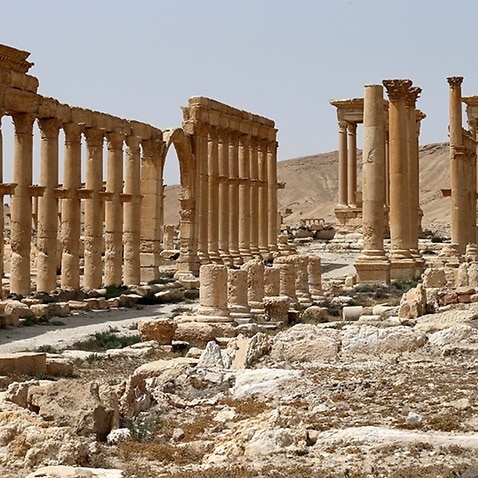 IS 'could do more damage' to Palmyra's ancient ruins: expert

As the battle for Aleppo enters its final phase, Syrians now living in Greece feel utterly consumed by the human cost of the four-year rebel fight for the traumatised city.

"For these years, Aleppo was free," says Majd Ahmad, a 26-year-old, currently living in a squatters apartment in the bohemian Athens district of Exarchia.

"We fought for the revolution and now everything is collapsing. Every person who wanted more liberty in Syria is either dead or had to flee."

Having arrived in Greece nine months ago, like the majority of the 62,000 exiles stuck here since the closure of the country's northern borders, Ahmad feels helpless.

"What was the purpose of our fight?" asks the former university student, exhaling the smoke of one cigarette before lighting another, while scouring his smartphone for the latest news updates.

"I have lost so many loved ones. I do not want to lose more."

Syrian President Bashar al-Assad's forces now hold more than 90 percent of the onetime opposition stronghold of east Aleppo, and appear on the verge of retaking the entire city.

Its fall would deal the rebels their worst defeat since the beginning of Syria's conflict in 2011, and leave the government in control of the country's five major cities.

"I cannot describe my sorrow," says another exile, a 24-year-old former student now in Athens speaking under the pseudonym of Abu Habib.

"My entire city has been destroyed, so many children died, and for what?" says Habib, who fled Syria to avoid forced conscription.

The rebels seized control of east Aleppo in 2012, a year into an uprising that began with anti-government protests but spiralled into a civil war after a regime crackdown.

An estimated 120,000 people have fled rebel-held districts, many heading towards displacement centres in government-controlled areas to the west.

In the three-week assault by the Russian-backed Assad's forces to retake east Aleppo, the country's biggest city, observers described air strikes and regime rocket fire so intense that windows in the west rattled.

Many crushed under rubble have been left to die because rescue crews cannot reach them.

Lodged in squats or flats rented by the UN refugee agency, the young men in Athens spend most of their time on Twitter and Facebook, trying to stay in touch with loved ones in the city.

"My grandparents and cousins are still in the city," says Habib.

"They cannot go out, they are running low on food and medicine and each time they hear a plane fly overhead they pray to stay alive," he adds.

Abu Rmosh - another pseudonym - lost his wife and two children, aged one and three, in the bombardments.

After having fled the country to escape forced military service, the 30-year-old regrets leaving his parents and other relatives behind.

"I lost everything. My family, my life," the blue-eyed Syrian says, adding that there was "no sense" in the fight for Aleppo, with both sides guilty of killings and theft of humanitarian aid.

Like many fellow Syrian refugees, Abu Rmosh is also seething at the apparent inaction of the international community.

"Why did the United States and other great powers allow a massacre of this scale to happen," he asks.

Radoslaw Rzehak, UNICEF's field office chief in Aleppo, estimates that half a million children in Aleppo need some kind of psychological and social support, including 100,000 who need more specialised assistance.

"I have never seen in my life such a dramatic situation (as) what is happening to children in Aleppo," Rzehak, who has been working for UNICEF for the past 15 years, told AFP.

Some Western observers say the fall of Aleppo will be a pivotal turning point akin to Stalingrad in World War II, while others question whether Assad can still prevail in a country where he is widely despised.

More than 300,000 people have been killed in Syria's war, and over half the country displaced.

The government assault on Aleppo has killed at least 415 civilians since mid-November, according to the Observatory. Another 130 civilians have been slain in rebel fire on the city's west over the same period, it says.

Diplomatic efforts to end the conflict have repeatedly failed.

Russia last week said talks were under way with US officials on securing a ceasefire and the withdrawal of all rebel forces from Aleppo.

But despite a series of high-level meetings there was no progress in halting the fighting.

Moscow is a key Assad ally and launched an air war in support of his forces last year, while Washington and other Western nations have supported rebel forces battling the regime.

French Foreign Minister Jean-Marc Ayrault said Monday the latest round of Russia-US talks at the weekend failed "because there is double-talk and a sort of permanent lie" on the Russia's part.

"On the one hand they say: let's talk, let's talk and get a ceasefire," Ayrault said. "On the other hand, they continue the war... aimed at saving Assad and capturing Aleppo." 'So happy and so pleased': School dux for Syrian teen refugee