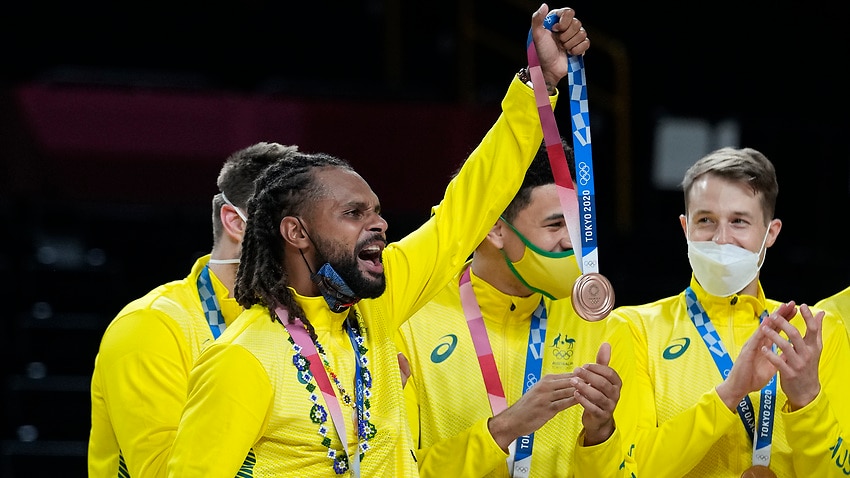 The wait is over.

The Boomers have a medal in their hands 🇦🇺😭#Tokyo2020 | #7Olympics pic.twitter.com/gkNpV3kvex

But Dante Exum, Joe Ingles and Matisse Thybulle all stepped up to slow the Slovenian star and helped create Australian men's basketball history.

"We've been waiting for this moment for a long time; it's taken a lot of ups, a lot of downs for us to get over the hump," Mills told the Seven Network.

"It's our culture, Aussie spirit, the boys being able to hang together.

"Now we've made it over the hill, this is the standard now for Australian basketball for men.

"I don't know whether to cry, laugh, smile - a lot of emotions.

"It's time to bring an Olympic medal home ... so I can hang it up at Mum and Dad's house."

The Australian team poses for pictures on the podium after receiving their bronze medals in the men's basketball competition of the Tokyo Olympic Games. Source: AFP

Ingles (15 points, nine rebounds, four assists) said he has no plans to walk into the sunset with bronze, already eyeing the Paris 2024 Games after declaring the Boomers' medal as the new standard for Australian men's basketball.

"We're not done; straight after the game, the emotions are kicking but this is the standard and we've been fighting for this since 2008," Ingles said.

"When these younger generations take over eventually ... a gold medal, we missed out on that, but this is the standard Australian basketball's going to have forever now.

"In Beijing I was 20, Patty was 19 and we've continued to build this, pushed by each other.

"Its always been such a focus ... it's special to do it with him and he carried us tonight.

"There was no doubt in my mind he was going to bring it home for us.

"Our whole country was riding on him, everyone's been part of this but we all know at the end of the day if we needed a bucket we were going to this guy."

Mills made certain there would be no repeat of the corresponding game five years ago in Rio, where Spain broke hearts to win by one point in the final seconds.

He put up 31 shots, 15 of those three-point attempts, in an aggressive performance that carried the side most of the way before Ingles found his range in the second half.

Exum (12 points) also hit crucial shots and made a timely defensive play against a Slovenian side that hung in despite Doncic struggling for a bulk of the night.

Nursing a strapped left wrist, he was forced into eight turnovers, Slovenia surprisingly surging ahead while he was benched in the second quarter.

The Dallas Mavericks star got hot late in the fourth though, draining back-to-back three-pointers as they cut a 14-point deficit down to a one-possession game.

An unsportsmanlike foul on Jaka Blazic helped the Boomers' cause though, the Slovenian inexplicably pushing Mills over after fouling him, sending Mills to the foul line and allowing Australia a chance to regain composure.

Thybulle, an emerging NBA talent with Philadelphia 76ers who spent his early years in Australia, proved to be a telling addition in Tokyo.

He collected 11 points on 83 per cent shooting plus five rebounds, four assists, three steals and one block to have another dramatic impact on the contest.

A pair of Thybulle dunks, the second a flying effort in transition, gave Australia the momentum at the half, while Jock Landale (14 points, six-of-eight shooting) capped a fine tournament as he prepares to begin his NBA career with the San Antonio Spurs.