More than 40 doctors, teachers, nurses and other former immigration detention centre employees have said they will not be silenced under secrecy laws that are effective from today.

The Australian Border Force Act means an "entrusted person" who works, or has worked, in Australia's immigration system will be committing an offence if they disclose information about conditions in detention centres without the department's consent.

Today, a government spokesperson told SBS it was not yet decided whether a medical professional would be considered an "entrusted person".

The "Secrecy" section in Australian Border Force Act comes with a penalty of two years prison for disclosing information without departmental consent, with some exceptions. Those include obligations of other Commonwealth or state laws or requirements under the direction of a court.

Mr Burnside told SBS the government would not be wise to charge a person for disclosing information, since the Act contained a strong defence. Section 48 in the Act says an entrusted person could disclose information if they thought it was necessary for an individual's life or health.

Mr Burnside said the government was trying to create a chilling effect and scare entrusted people out of making disclosures.

He has offered free, expert legal advice to any medical professional who is charged under the secrecy provisions.

Today, Immigration Minister Peter Dutton said the intention of the act was not to supress information about conditions inside detention centres.

"While the Government will take action to protect operationally sensitive information, such as personal information or information which compromises the operational effectiveness or response of our officers, the airing of general claims about conditions in immigration facilities will not breach the ABF Act," Mr Dutton said.

The explanatory memorandum for the Australian Border Force Act says the secrecy provisions were necessary to "provide assurances to law enforcement and intelligence partners in Australia and internationally and to industry that information provided to the Department will be appropriately protected".

Some information would still be permitted for release, the Act's explanatory memorandum says.

"Additionally, the Secretary may impose conditions on the recipient of the information, such as requirements about ongoing use of the personal information disclosed," the document says.

Former immigration detention centre doctor John-Paul Sanggaran has circulated an open letter addressed to the Coalition government and the Labor opposition, stating they will not stop advocating for people in detention.

"We have advocated, and will continue to advocate, for the health of those for whom we have a duty of care, despite the threats of imprisonment, because standing by and watching sub-standard and harmful care, child abuse and gross violations of human rights is not ethically justifiable," the letter states.

"We are aware that in publishing this letter we may be prosecuted under the Australian Border Force Act
and we challenge the Department to prosecute so that these issues may be discussed in open court and
in the full view of the Australian public," the letter states. 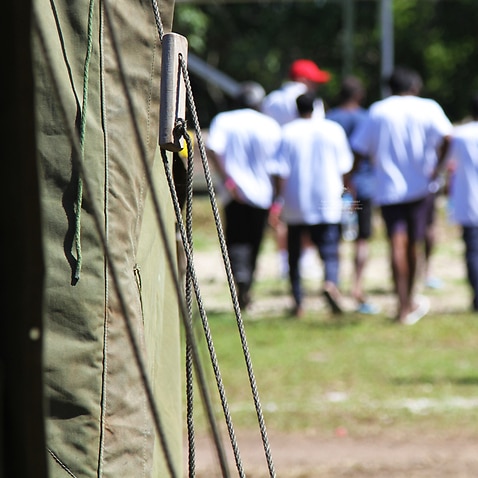 Border Force Act: whistleblowers not convinced they won't be targeted by govt

This morning, Dr Sanggaran told SBS that doctors had ethical obligations to do what was best for their patients.

"Part of every doctor's job is to advocate for the health of their patients," Dr Sanggaran said this morning.

"We have years of evidence of human rights abuse and a system which is recognised as child abuse."

The Australian Medical Association states that acting in a patient's best interest is part of a doctor's role.

Evidence of human rights abuses, including child sex abuse, in Australia's detention centres is documented in an Australian Human Rights Commission's report this year. Commissioner Gillian Triggs has needed to defend the report since the government labelled it political and partisan.

Dr Sanggaran said the intention of the law was to have a chilling effect on people who would seek to release important details about conditions in detention.