New analysis from Oxfam has found that poorer countries are set to miss out on as much as $104 billion in funding over six years to adapt to climate change. 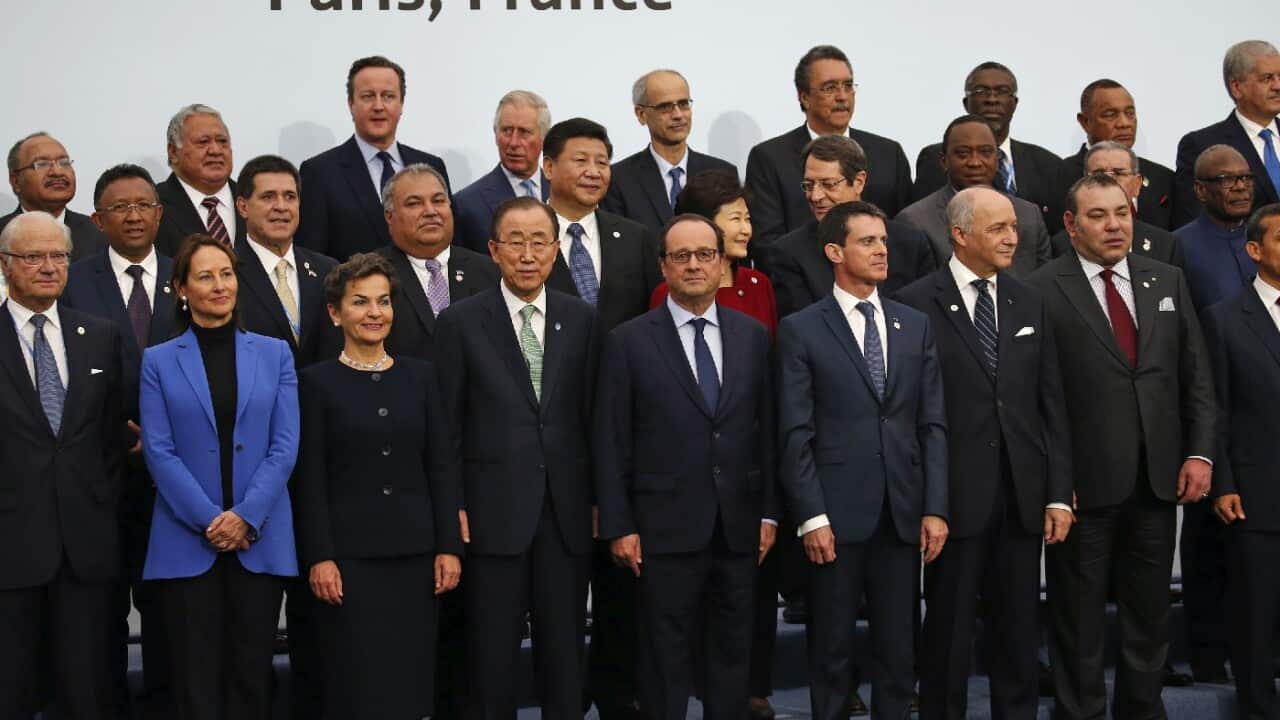 World leaders pose for a group photo at the COP21 in Le Bourget, outside Paris, on 30 November 2015. Source: AAP

Wealthy nations are expected to fall billions of dollars short in delivering their six-year climate finance target to the most vulnerable countries, aid charity Oxfam forecasts.

As part of the 2015 Paris Agreement, wealthy nations reaffirmed a 2009 pledge to allocate A$138 billion (US$100 billion) annually from 2020 to 2025 for poorer countries to reduce emissions and respond to  the effects of climate change.

Based on current pledges and plans, Oxfam estimates that wealthy governments will continue to miss the goal, and will reach only between A$129 billion (US$93 billion) and A$131 billion ($95 billion) per year by 2025.

Advertisement
The analysis found that would result in a shortfall in financing for climate-vulnerable countries of between A$94 billion (US$68 billion) and A$104 billion (US$75 billion) over the six-year target period.

"Wealthy nations must live up to their promise made 12 years ago and put their money where their mouths are. We need to see real funding increases now," she said.

She said the decisive action taken to respond to the pandemic should also be applied to the "climate emergency".

"Millions of people from Senegal to Guatemala have already lost their homes, livelihoods and loved ones because of turbo-charged storms and chronic droughts, caused by a climate crisis they did little to cause," she said.

The analysis comes ahead of informal climate talks between world leaders at the UN General Assembly later on Monday.

UK Prime Minister Boris Johnson is using his meetings over the next three days in New York and Washington to appeal to world leaders to deliver on the climate finance pledge.

Mr Johnson is attempting to raise the level of ambition of the climate pledges on emissions and financing ahead of next month's COP26 meeting in Glasgow.

He said it will be challenging to attain the climate financing pledge, but there are better than even odds.

"But people need to understand this is crucial for the world. Some countries are really stepping up to the plate. Others, some G20 countries, need to do much more."

Prime Minister Scott Morrison departed for the United States on Monday where he will meet with Mr Johnson and attend the first face-to-face Quad alliance leaders' summit.

OECD data released last week found the pace of climate funding has further slowed between 2018 and 2019 - growing two per cent to $79.6 billion.

The data from 2020 registering the impact of the pandemic is not yet available.

Leaders from poorer, climate-vulnerable nations have said climate finance from wealthy countries is essential to deliver on their climate plans.

As part of its pledge under the 2015 Paris climate agreement - India, the world's third-biggest carbon emitter after China and the United States - is supposed to reduce its carbon footprint by 33 to 35 per cent from 2005 levels by 2030. But any further committment would depend on climate financing, Reuters reports.

The Philippines said it can only finance about three percentage points of its promise to reduce emissions by 75 per cent by 2030.

Australia has set a 2030 target to reduce emissions by between 26 and 28 per cent.

Mr Morrison has signalled an intention to move to net zero by 2050 - a goal adopted by more than 100 countries.

It comes as the United Nations warned over the weekend that the world is on a
"catastrophic pathway" of 2.7C
global warming.

UN Secretary-General Antonio Guterres said exceeding the 1.5C goal agreed upon in the 2015 Paris Agreement would be disastrous.

"Failure to meet this goal will be measured in the massive loss of lives and livelihoods," he said.

Last month, the latest report by the Intergovernmental Panel on Climate Change (IPCC) found that the 2C global warming threshold could be achieved by 2030 - a decade earlier than previously expected.

The report found that the world has now reached about 1.1C of global warming in the century since industrialisation began between 1850 and 1900. The impact has been uneven across regions, with the warming in Australia reaching 1.4C.