Australia and China have signed a free trade agreement after a decade of negotiations. But what does it actually mean for Australians? 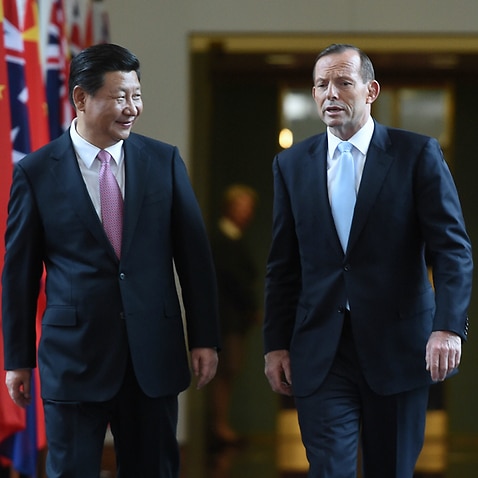 The government believes the agreement, or ChAFTA as it has been abbreviated, will provide greater access to an international market for Australian goods and services, increase investment in Australian industry and infrastructure and allow for cheaper Chinese goods in Australia.

The signing of this deal means Australia has now signed free trade agreements with its major trade partners Japan, South Korea and China in just more than a year. However, as Australia’s largest export market, the China deal is the most significant.

How does the trade agreement work?

In simple terms, a free trade agreement allows two countries to become more economically integrated by removing barriers to the trading of goods and labour.

In the case of ChAFTA, the agreement will lower tariffs on imported goods and ease restrictions on the ability of foreign workers to gain employment Australia.

China is Australia’s biggest trade partner, with exports of around $A107.5 billion each year, and $A52.1 billion in imports, the deal will have significant ramifications for an array of companies in various industries.

What about the impacts of Australia’s recent North Asian FTAs?

The Department of Foreign Affairs and Trade today released a report from the Centre for International Economics, looking at the economic benefits of Australia’s FTAs across North Asia.

It provides a broad snapshot of how the FTAs will affect various sectors of the Australian economy.

According to DFAT forecasts, under the FTAs Australia's exports will be higher in 2035:

The forecasts also predicted an additional GDP increase between 2016 and 2035 of $24.4 billion and a boost in real consumption of $46.3 billion, which equates to an increase in household consumption of close to $4,500.

Australian consumers are expected to have access to cheaper household goods, clothing and electronics, imported from China.

However the Australian Fair Trade and Investment Network (AFTINET) expressed concern regarding the veracity of those estimates.

In a release today it said the study authors were “consultants which produced wildly optimistic estimates of benefits for the Australia-US FTA which did not eventuate.”

How will ChAFTA affect tariffs on Australian exports to China?

Once ChAFTA has been fully implemented, 95 per cent of Australian exports will be tariff free.

The deal will see trade tariffs of up to 20 per cent on Australia’s $13 billion dairy industry abolished, as well as tariffs on Australian beef and wool.

"I trust that today our Chinese friends will enjoy the fine beef and the good wine that will soon be more readily enjoyed by their countrymen.”

Tariffs on wine of up to 30 per cent will also go within four years, as will tariffs on seafood, including on abalone and southern Bluefin tuna.

Mr Abbott toasted the above changes at today’s signing, saying; "I trust that today our Chinese friends will enjoy the fine beef and the good wine that will soon be more readily enjoyed by their countrymen.”

Australia’s resources and energy sector will benefit from the removal of tariffs on coals and aluminium oxide.

Tariffs will be also dropped on manufactured goods including pharmaceutical products.

There will be no change to the current trading quotas imports of Australian sugar, cotton, rice, maize and wheat to China.

What about the volume and value of Australian exports to north Asia?

The deal will see a substantial increase in the volume and value of exports to China.

Below is a breakdown of the predicted percentage boosts in exports from Australia to North Asia in general services, agriculture and mining.

The government believes the deal will take relations between the two countries to “another level”.

“It is a privilege to be involved with an agreement that will take what is already a strong relationship to, I think, another very seriously high level,” Mr Robb said today.

How will the deals affect jobs?

The charts below show the estimated year-by-year increases in employment rate, wage rate and additional jobs created as a result of the north Asian FTAs.

How have labour unions reacted to the deal?

The Australian Council of Trade Unions (ACTU) says it is deeply concerned about the effect the deal will have on Australian labour, saying it could undermine local jobs and increase unemployment.

It says that based on the factsheet the government released last year after reaching a memorandum of understanding with China, employers will be able to more easily offer jobs to Chinese workers without advertising them locally.

“Free trade agreements must support local jobs and industry and all indications are that the deal with China does not.”

“Free trade agreements must support local jobs and industry and all indications are that the deal with China does not,” said ACTU President Ged Kearney.

“There must be strong rules around labour market testing and labour mobility clauses in the China free trade deal to ensure local jobs are protected.

“Unemployment has been at or above 6 per cent for one year yet it appears the government is intent on selling out even more local jobs."

The Electrical Trades Union has also condemned the deal, with national secretary Allen Hicks saying the agreement could lead to Australian workers in the infrastructure and resources sectors finding themselves “locked out of jobs.”

“This agreement robs local workers of the safety, standards and conditions that we have fought for and won over many years,” he said.

“For the overseas workers it will also potentially lead to exploitation of their wages and conditions.”

How long has an Australia-China FTA been in the works?

A free trade agreement between Australia and China was first proposed in 1999, when Labor Opposition Leader Kim Beazley mentioned the idea of a trade treaty with China’s President Jiang Zemin. In 2000, his Trade Minister Peter Cook pledged that were the Labor Party to return to government it would “seek to negotiate with the government of China a comprehensive bilateral trade and investment framework agreement.”

In November last year a memorandum of understanding was reached, with both nations following through on that agreement today.

The deal will need to be ratified in Australian parliament before it comes into effect and Labor and the Greens have pledged to take a close look at the final agreement.

Labor has said its main concern is that temporary work visas will be used to bypass local workers.