What happened at the Battle of Hamel?

The Battle of Hamel during World War One was a major milestone in Australian military history and cemented the reputation of commander General John Monash. 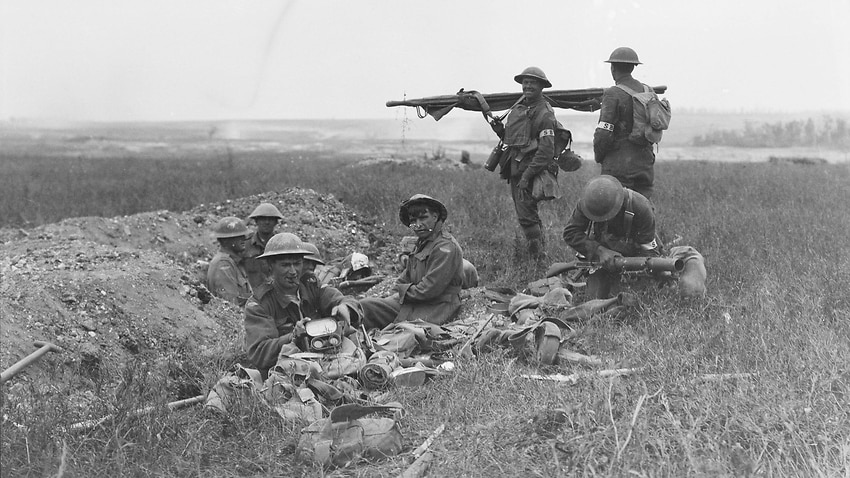 American and Australian stretcher bearers working together in the front line area after the infantry had passed. Source: Australian War Memorial / AAP

At precisely 3.10am, the guns thundered into life and the soldiers rose, lit up cigarettes and followed the booming artillery barrage into battle, their objective a French village named Le Hamel.

As dawn loomed it was all over. The village had fallen, casualties were mercifully light (by World War One standards) and victory was complete.

The Battle of Hamel, fought on July 4, 1918, was a sign of what was to come as allied forces achieved battlefield mastery after three years of trench warfare marked by frightful casualties for minimal gains.

Praise for the Australians and for Monash followed and a succession of British commanders visited his headquarters to study his methods.

This did much to establish Monash's reputation, which would only grow as he led the Australian Corps in a succession of triumphs, culminating in the Armistice on November 11.

But Hamel wasn't a turning point. Eleven days later, 52 German divisions counter-attacked south of the Somme and were fought to a halt. Three days later, French forces supported by the Americans attacked, opening the famous 100 days that pushed Germany to the point of collapse.

A century on, the Battle of Hamel will be remembered in France and Australia. A ceremony will be held at the Australian Corps Memorial in Hamel.

And in Canberra, a new statue of Monash will be unveiled at the Australian War Memorial.

By mid-1918, the allies had much going in their favour. The massive German March offensive was running out of steam and the blockade of Germany was starting to bite. Supplies, even food, were running low.

American forces were arriving in big numbers and there were ample stocks of food and munitions.

In May, Monash was chosen to lead a united Australian Corps, comprising five divisions with around 120,000 troops. Previously Australian divisions were allocated to British corps according to need.

Monash promptly got on with planning for Hamel, his first battle for a united Australian Corps. For the Western Front, this wasn't a huge deal, just advancing two kilometres on a 6.5 kilometre frontage.

Monash planned meticulously, writing later that a modern battle was akin to an orchestral composition, with every unit entering at precisely the proper moment to play its part in the general harmony.

What Monash planned was a progenitor of a modern day combined arms operation, featuring infantry, armour, artillery and aircraft, all working together.

The diggers had a low opinion of British tanks, which performed poorly the previous year at Bullecourt.

Monash believed they could be useful and the Australian Corps was assigned 60 of the latest Mark V models and before going into action, tanks and infantry practised together, the soldiers developing much needed confidence in the machines and their crews.

Monash also exploited air power, with aircraft initially flying over German lines to drown out noise of approaching tanks and then dropping ammunition to the advancing infantry.

Even official correspondent Charles Bean, at that time no fan of Monash, conceded he was a master of lucid explanation.

Two hundred and fifty officers attended his final conference on June 30, wading through 133 agenda items over four and a half hours. No-one departed with any doubt about his role and that cascaded right down to individual soldiers.

"A lot of men had seen a lot of action and they were now developing new tactics," he said.

"They have a greater appreciation of using all the tools at their disposal, which Monash makes abundantly clear he's going to use - tanks, aircraft, artillery and of course assault machine guns, the Lewis Gun, in greater numbers than ever before."

Hamel had another feature - Americans. Hamel was to be their first action, with the diggers mentoring these newcomers on the battlefield.

It was for precisely that reason that Monash picked July 4 - American Independence Day.

Initially about 1000 were to participate but US commander General John Pershing objected, insisting that most and then all be withdrawn.

Monash drew the line - either the Americans were in or he would cancel the attack.

They were in and at 3.10am, more than 600 guns deluged German positions with high explosives and poison gas. Infantry followed close behind the artillery barrage with the tanks close behind, ready to be called forward to crush wire or obliterate strong points.

With no preliminary bombardment to alert defenders, surprise was complete.

But the result was never in doubt. German losses were substantial, around 2000 including 1600 prisoners captured, along with 200 machine guns and trench mortars.

Compared with earlier battles, Australian casualties were light - about 1400 dead and wounded, while 45 of the accompanying Americans were killed.