The new COVIDSafe app aims to improve the tracing of COVID-19 cases and the people they come in contact with. 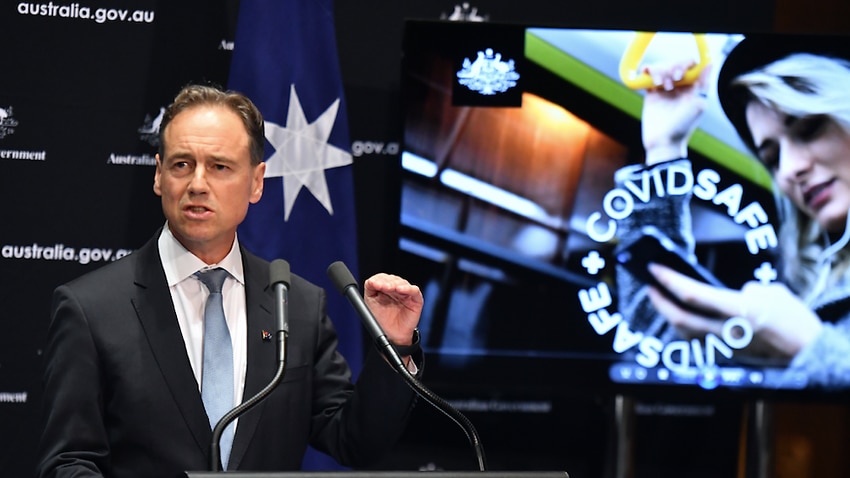 On Sunday, the Federal Government launched a mobile phone app it hopes will improve the tracing of coronavirus cases and the people they come in contact with.

The COVIDSafe app is based on Singapore's Tracetogether software, which records the Bluetooth connections a phone makes with others, as part of what's being called a "Bluetooth handshake".

But the launch came amid concerns about the technology and the data it would collect.

What is the app and why is it being introduced?

The COVIDSafe app aims to identify people who may have come into contact with someone who has coronavirus so the user can give the information to health authorities.

The contact will be recorded if you get within 1.5m of another person with the app open and the contact lasts for 15 minutes.

The CovidSafe app is seen on a television monitor during a press conference at Parliament House in Canberra, Sunday, April 26, 2019. Source: AAP

"It is about assisting and finding those cases which may be undiagnosed in the community, helping people get early treatment, have early diagnosis and to ensure that our doctors and nurses, our health workers, our families and friends are protected," Health Minister Greg Hunt said.

The data the app records includes the encrypted user ID, the date and time of the contact, and the Bluetooth signal strength of other COVIDSafe users with which they come into contact.

A broader testing regime and a government contact tracing app are seen as key stepping stones to a relaxation of Australia's shutdown.

Downloading the app is voluntary, but the Federal Government wants to see at least 40 per cent of Australians register so authorities can step contact tracing up to an "industrial-scale".

Chief medical officer Brendan Murphy said he was "very confident" the app would get "good uptake" and that it would streamline the contract tracing process.

"That can be a very laborious, manual process," Mr Murphy said.

First, you need to download the app. Apple users can go to the App Store and Android users can head to Google Play.

On downloading the app, people will be asked for four things:

In order for COVIDSafe to work, you need to keep the app open and Bluetooth switched on.

There was some initial confusion about whether you also needed to have your phone unlocked to use the app, but Mr Hunt clarified that was not the case.

Mr Hunt said no location data will be collected at any time.

Does the app place my personal information and privacy at risk?

The government says the app is safe and personal information will be handled in accordance with the Privacy Act 1988 and the Biosecurity Determination 2020.

A report by the ABC this week flagged a contract for COVIDSafe's data storage was given to US-based retail giant Amazon, further raising concerns about whether Australians' data could be passed onto third parties.

On Sunday, Mr Hunt moved to quash some of those concerns, saying data would only be stored in Australia and would only be accessible by state and territory health authorities.

"It is punishable by jail if there is a breach of that," he said.

Data would not be passed on to police even if the app found that people had gathered in the one place and breached social distancing measures, Mr Hunt said.

"That may, in some ways, diminish what some might have wanted. But as a cabinet we considered all of the possibilities and we said it was to have one job," he said.

The early reaction to the app has been mixed.

The Business Council of Australia said the app would be crucial to keeping people safe and building community confidence.

"The more Australians who download the app, the safer we will all be and the more quickly we can begin to ease restrictions. I'll be downloading the app and I urge all Australians to do the same," CEO Jennifer Westacott said.

"The government has given us assurances data collected will not be shared with any agencies other than health authorities, and it must be protected by a sunset clause that the data will be destroyed when the threat of contagion eases," campaigner Tim O'Connor said.

Earlier on Sunday, Labor's home affairs spokeswoman Kristina Keneally said the app could prove to be a "great tool" but was unsure how many people would download it.

"Australians will only download the app if they have confidence that their privacy will be protected," she told the ABC.

More information about the app is available here.