West Australians are going to the polls on 13 March, despite the opposition leader conceding defeat last week. 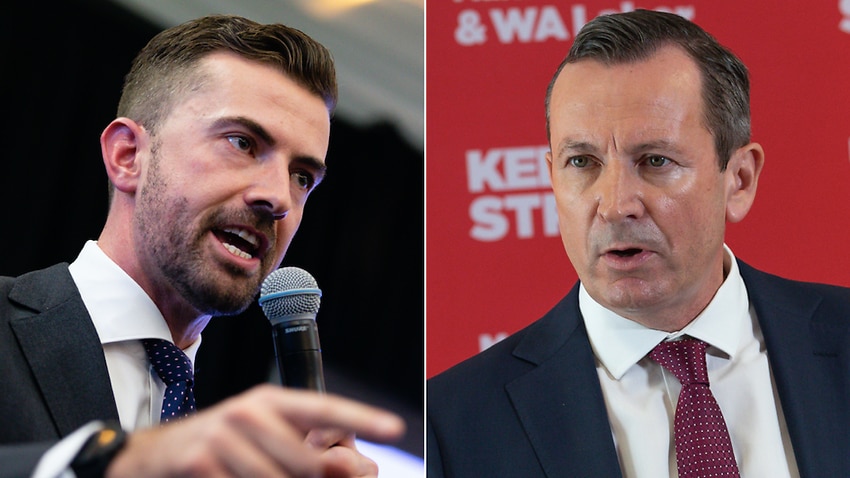 On Saturday, people in Western Australia will head to the polls for a state election the opposition has already conceded it won’t win.

Incumbent premier and Labor leader Mark McGowan has enjoyed record approval ratings, stemming from his handling of the COVID-19 pandemic.

Meanwhile, opposition Liberal leader Zak Kirkup, a first-term MP who has held the top job for just four months, is battling to save his own seat.

A Newspoll published by The Weekend Australian on 20 February showed WA Labor leading 68 to 32 per cent on a two-party preferred basis - a result which, if replicated this weekend, would reduce the Liberals to as few as two seats.

Here’s what you need to know about the political landscape in WA ahead of this weekend.

All incumbent premiers have benefited to some extent from the COVID-19 pandemic by projecting strength to spooked voters.

But that effect has been turbocharged in the west, where Mr McGowan's action in closing interstate borders - creating "an island within an island" - has played out extraordinarily well.

Since introducing the hard border policy last April, WA has avoided community transmission of the virus.

And with the exception of a brief lockdown last month, West Australians have largely been free to go about their normal lives - a point the premier relishes making whenever his border policy is questioned by eastern states critics.

Mark McGowan speaks during the launch of the Labor campaign at RAC Arena in Perth, Sunday, February 21, 2021. Source: AAP

Mr McGowan, a former naval lawyer who was born and raised in NSW and was barely known when he won office in 2017, has gone viral on TikTok and has even been immortalised in a young fan's tattoo.

"And the harder he gets criticised from the east, the more his popularity seems to go up."

The premier's snub of visiting federal Labor leader Anthony Albanese - who was not invited to publicly campaign alongside Mr McGowan this week - highlights that the government's re-election bid is effectively a one-man show.

With Labor encouraging voters to elect their "local Mark McGowan candidate", the premier has promised to continue keeping WA safe and strong.

Liberals at 'lowest point since formation'

Mr McGowan's strong polling figures have led Mr Kirkup to pivot to warning of what Labor might do if it claims "total control" of parliament.

He pounced this week on a rare slip-up by Mr McGowan, who was forced to backtrack on a suggestion that authorities might continue to track anyone who enters the state beyond the pandemic.

The tactic of effectively conceding the election is aimed squarely at traditional Liberal voters at risk of switching to Labor.

Whether it shifts any votes remains to be seen. Mr Kirkup's policy platform, including an ambitious clean energy plan that was savaged by his own state and federal colleagues, hasn't helped the cause.

Read More
The WA Liberal party will field 88 candidates at this year's state election. Less than one third are women

But the WA Liberals' issues run much deeper.

Three leadership changes since the last election is widely seen as a reflection of infighting and a shallow talent pool within the party's ranks.

Candidates in several seats, some linked to conservative churches, have caused headaches for the party.

One linked 5G technology to the COVID-19 pandemic, while another promoted an unproven anti-parasite drug as a potential cure. The Liberals were also forced to preference One Nation last on how-to-vote cards in two electorates after racist social media comments surfaced linked to candidates from the far-right party.

Mr Kennedy, whose reporting on WA politics dates back half a century, says the party is in a parlous state.

"It's the lowest point the Liberal Party in WA has been at since the party was formed in 1945," he says.

Any hope of a Liberal resurgence evaporated almost 10 months ago when former leader Liza Harvey called for WA to start reopening its borders.

Just weeks later, Victoria began to experience a second wave of infections, which was ultimately responsible for more than 800 deaths.

The question now is whether the Liberals can rebuild in time to be competitive in 2025, when voters return to the polls under WA's fixed-term elections.

John Curtin Institute of Public Policy executive director John Phillimore points to Queensland as proof of how quickly the tide can turn.

The entire Queensland Labor opposition was reduced to just seven MPs at the 2012 election. But three years later, the party under Annastacia Palaszczuk secured a stunning 14 per cent swing to return to office.

"Major parties are never really absolutely down and out," Professor Phillimore says.

"There have been wipeouts in other states before and parties have come back. So I would hold off proclaiming the death of the Liberal party, even though it will be obviously very difficult for them."

What’s the current make-up of the WA parliament?

Labor currently has 40 seats in the legislative assembly, the state’s lower house. The Liberals have 13 and the Nationals have six.

In the legislative council, or the upper house, Labor has 14, the Liberals nine, and the Nationals and Greens four.

One Nation has two, while the Shooters, Fishers and Farmers, Liberal Democrats and Western Australia Party have one each.

At the federal level, the Liberals currently hold 11 out of 16 federal seats in WA, although they may lose one -  Attorney-General Christian Porter's electorate of Pearce - under a looming redistribution.

Professor Phillimore said West Australians had typically been happy to split their votes at a state and federal level, noting that even during Labor's big win under Kevin Rudd in 2007, the party had lost net seats in WA.

But Canberra-based Liberals will undoubtedly be watching nervously ahead of a possible federal election this year.

"If they're not worried now, they should be," Mr Kennedy said.

"In the present circumstances it's hard to imagine them holding those 11, and they might lose three or four of them.

"That, I imagine, would have the prime minister very worried."

What are the key issues and seats to watch?

The government's strong COVID-19 response, which has prevented any community transmission of the virus since last April, has helped shape voter attitudes going into the election.

Other issues of note concern borders and what restrictions might remain beyond the pandemic, the creating of jobs and diversifying the economy, as well as climate change and renewable energy.

Mr Kirkup's seat of Dawesville is held on a margin of just 0.8 per cent, putting him at serious risk of losing his seat.

But there's another even more at-risk Liberal seat: Hillarys, held by Peter Katsambanis on a 0.4 per cent margin.

Former Liberal leader Liza Harvey's seat of Scarborough could also fall to Labor for the first time in 30 years.

Up in the mid-west region of the state, there's a three-way race for the seat of Geraldton. It is currently held by the Nationals, but Labor and the Liberals are looking to try and snatch it.

The fairly-safe Liberal seat of Bateman has also been targeted by Labor during the election campaign, though it remains to be seen if it will change hands.