As Florida police and the FBI scramble to unravel the motive behind Omar Mateen's deadly attack on the Pulse nightclub, here's what we know about who he was.

Florida shooter Omar Mateen, 29, was born in New York of parents who were immigrants from Afghanistan, according to a federal official who spoke on the condition of anonymity.

He held two gun licenses and a security license and worked as a security guard for a company called G4S.

Mateen has no criminal record, but had been twice investigated by the FBI for claiming he had links to IS in 2013 and 2014.

It is believed he drove to Orlando from his home in Fort Pierce, Florida.

He had a son from a short-lived marriage that ended in divorce in 2011.

In the aftermath of the attack several people who knew the gunman have come out to say he held homophobic views and had a history of violence.

The imam of the Florida mosque that Mateen attended for nearly 10 years described him as a soft-spoken man who would visit regularly but rarely interact with the congregation.

"He hardly had any friends," Syed Shafeeq Rahman, who heads the Islamic Center of Fort Pierce, told Reuters.

"He would come with his little son at night to pray and after he would leave."

He regularly attended the Islamic Centre of Fort Pierce and was there two days ago, the Post reported.

"He was the most quiet guy; he never talked to anyone," Imam Rahman told the Post.

"He would come and pray and leave. There was no indication at all the he would do something violent." These are the faces of the Orlando massacre victims

Mateen's ex-wife, who met him online in 2009, told the Washington Post he was violent and she left him in 2011 because she feared for her life.

"He was not a stable person," she said.

"He beat me. He would just come home and start beating me up because the laundry wasn’t finished or something like that."

The woman, who was not identified for her safety, said Mateen was not particularly religious, however a friend who also spoke to the Washington Post said he became more religious after the end of his marriage.

But the friend said he never expressed any sympathies for the extremist ideologies of groups like IS.

Samuel King said he often spoke with Mateen after he graduated high school. King worked at Ruby Tuesday's restaurant in the Treasure Coast Mall, where Mateen worked at GNC, the nutrition store, he said.

King, who is openly gay, said the Mateen he knew until 2009 did not appear to be anti-gay.

"What is shocking to me is that the majority of the staff at Ruby Tuesday's when I worked there were gay. He clearly was not anti-(gay) at least not back then. He did not show any hatred to any of us. He treated us all like the individuals we were. He always smiled and said hello."

King described Mateen as gregarious and talkative in the immediate years after high school, but said "something must have changed" since he last saw him in 2009. The Pulse nightclub shooting was the deadliest outburst of gun violence in US history with 50 people killed and more than 50 people injured.

Mateen photographed himself wearing various New York Police Department T-shits and a friend told US media he had once hoped to be a law enforcement officer.

He was also a registered Democrat.

The Afghan-born father of Omar Mateen has apologised for the attack.

In an interview with NBC News on Sunday, Seddique Mateen said his son's rampage had nothing to do with religion but was possibly sparked by witnessing two men kissing in Miami.

NBC News quoted him as saying they weren't aware of any action their son was taking and were in shock, apologising for the whole incident.

US officials cautioned that they had no immediate evidence of any direct connection with Islamic State or other foreign extremist group. 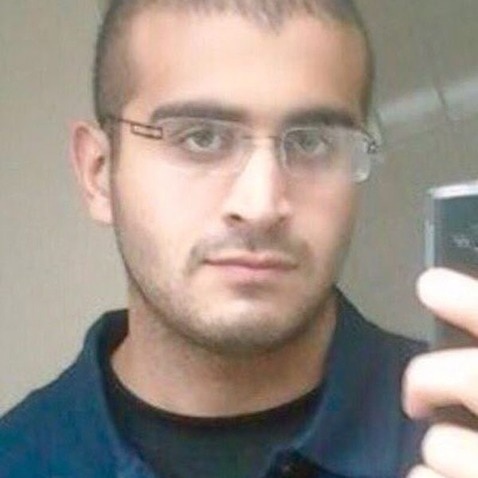 Omar Khatab, the owner of the California-based satellite channel Payam-e-Afghan, said Seddique Mateen occasionally bought time on his channel to broadcast a show called Durand Jirga, which focused in part on the disputed Durand Line, the frontier between Afghanistan and Pakistan demarcated by the Indian subcontinent's former British rulers.

"Three or four times a year, he would show up in Southern California," Khatab said in a phone interview on Sunday.

"He'd talk for about two to three hours. He'd buy his own time and come here and broadcast and leave within a day."

One of Seddique Mateen's videos refers to the "killer ISI" - the acronym for Pakistan's main military-run intelligence service - and says the agency is the "creator and father of the world's terrorism".