A new Australian-developed system is to begin generating electricity from ocean waves later this year, with a report showing three-quarters of Australia’s energy needs could be met by renewables by 2025.

Dr Tom Denniss is a man on a mission, designing Australian technology to test the potential for a commercially viable ocean wave system.

His pilot project is taking place on King Island between the Australian mainland and Tasmania.

“Australia probably has the best, or one of the best, wave climates in the world,” he told SBS News while walking at Sydney’s Cronulla Beach.

“The whole southern part of Australia from lower Western Australia right up to New South Wales and including Tasmania is very, very, conducive to this technology.”

Dr Denniss is a former high school maths teacher with a PhD in mathematics and oceanography. In 2016, the now 58-year-old co-founded Wave Swell Energy, hoping to demonstrate for the first time that ocean power can be commercially viable. 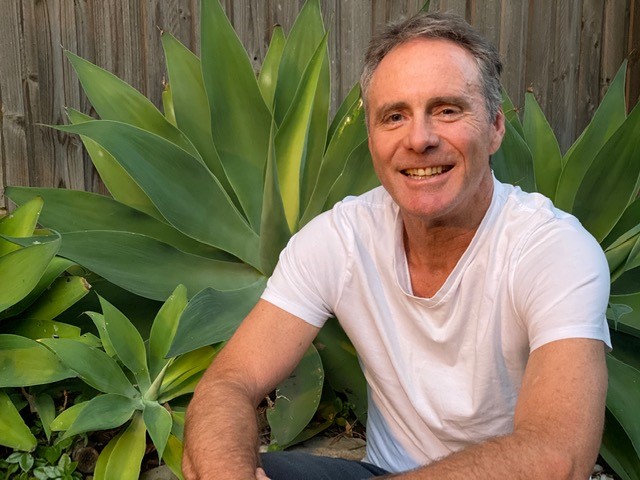 “The way that our technology works is very much like an artificial blowhole,” he said.

“We create an artificial cave and the waves move into that cave. They rise and fall and displace the air. And that displaced air is what drives the turbine and generates the power.”

The vessel looks like a sturdy boat and will be towed to King Island prior to Christmas 2020, to complement the island’s existing wind and solar power systems. 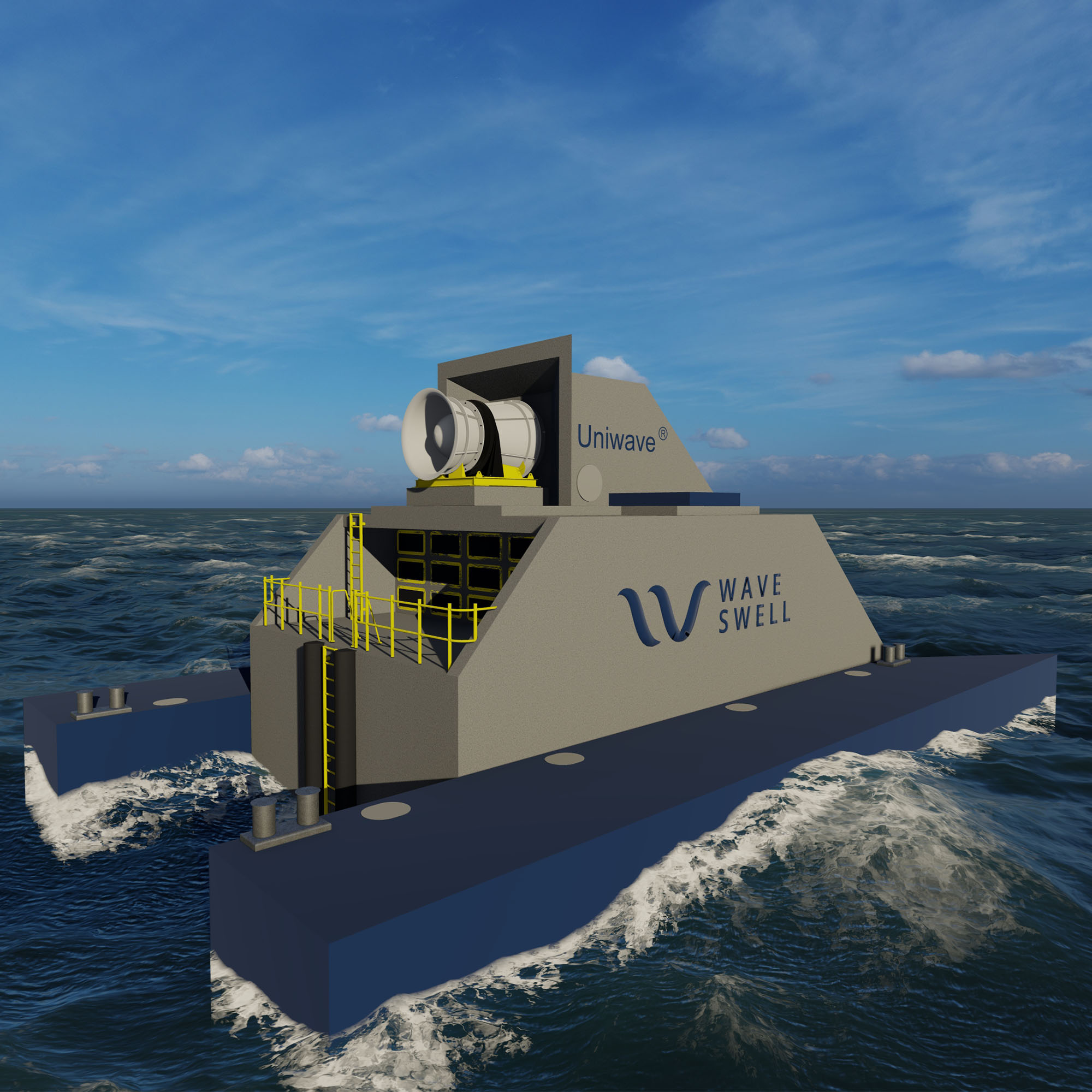 The Wave Swell unit looks like a sturdy boat.
waveswell.com

“King Island is not on the main grid, it has its own microgrid that's administered by Hydro Tasmania, which is a world leader in the integration of renewables into small Island grids,” Dr Denniss said.

“By incorporating our technology into that micro-grid, they will have the first power plant, or power station, in the world that operates on three different types of renewables.” “What our unit will be doing is filling in the gaps when the wind isn't blowing and when the sun isn't shining. So we'll be helping to supplement the renewable energy on the Island and therefore reduce the requirement for diesel.”

The pilot project will trial a 200-kilowatt unit, with future plans for larger one-megawatt units that could each power up to 1,000 homes. It is hoped wave power will be part of Australia’s renewable energy future.
Getty Images

Dr Denniss has served on the Australian Government's Advisory Board for the Clean Energy Innovation Centre and had previously sat on the United Nation’s Global Roundtable on Climate Change.

The CSIRO says Australia has great potential to harness wave energy as an island surrounded by 35,877km of coastline. But generating energy from the ocean remains at an early stage of commercialisation. Dr Denniss’s project is among several hoping to be part of Australia’s renewable energy future.

“Globally there'd be about 10 projects at a similar stage, the early demonstration or pilot phase,” said Dr Mark Hemer, an offshore renewable energy systems principal research scientist at the CSIRO. “And they are really useful to overcome some of the technical challenges that still remain for wave energy.“

“The big difference with our technology is the fact that there are no moving parts whatsoever in the water and that, I think, has been the fatal flaw for other technologies in the past that have been in very deep water,” Dr Denniss said. 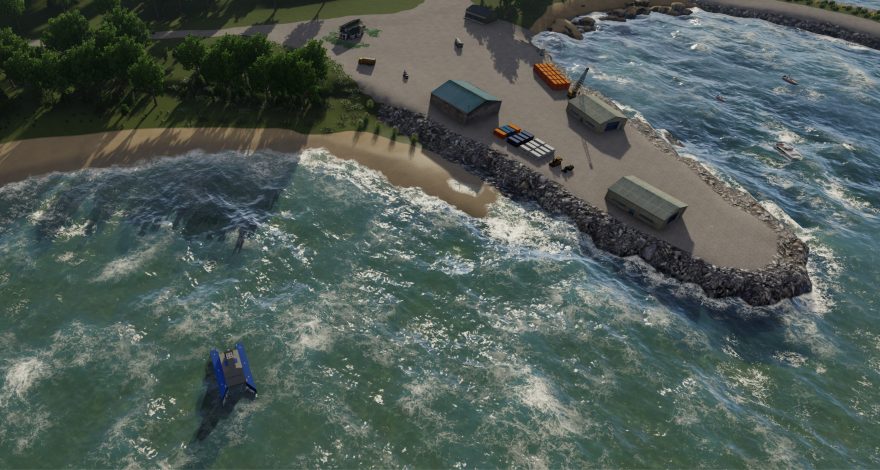 The Australian Energy Market Operator (AEMO) said in May that the Australian grid could derive 75 per cent of electricity from renewables by 2025.

AEMO said the grid is already capable of handling a very high penetration of intermittent renewables in its 20-year grid transition blueprint, the Integrated System Plan, but it called for changes to markets and regulatory requirements.

Minister for Energy and Emissions Reduction Angus Taylor wants Australia to remain a world leader in renewable energy, but he admits integrating record amounts of renewable energy into the grid remains a challenge.

“System strength has emerged as a major challenge impacting on renewable generation projects in the National Electricity Market (NEM),” he said in May.

"There are still a number of steps to be taken so that the NEM can operate reliably and securely with higher levels of renewable energy.” Wave Swell project manager Tom Wilson predicts over the next 15 to 20 years globally, ocean waves will be utilised to generate more power.

“Washing up on the coast is twice as much energy as the world consumes every day,” he said. And the Wave Swell system, once proven, may offer benefits to Australia’s island neighbours.

“They're surrounded by waves, so they have a very good resource right on their doorstep.

“We are confident that we can develop projects in Pacific islands to produce electricity more cheaply than diesel and obviously, also, without any of the pollution and the negative effects of fossil fuel generation.” The CSIRO’s Dr Hemer is hopeful. “Australia has a long history of demonstrating wave energy activities and a lot of gains were hard-won,” he said.

“We're looking at [this project] optimistically and hoping that we can see some real success for Australia to lead the way in wave energy.”