An organisation is collecting used and new bras to ship on request to communities where bras are unaffordable, or unavailable.

Every few months Rhiannon Donaldson embarks on a long drive from her home in the Blue Mountains to Sydney to drop off a tub of bras.

For more than three years, Ms Donaldson has donated bras to the Uplift Project, a charity supporting women without access to bras around the world.

“It’s not just providing a bra for a woman. There’s so much around wearing a bra, especially women with larger breasts, you’re back is going to hurt. From experience, my back is killing me if I’m bending over. It impacts on you," Ms Donaldson told SBS News.

“These women can be weeks and months of bending over and feeling that pain."

Founded by Melbourne-based chiropractor Liz Baker, the organisation has donated 2.5 million bras since its inception in 2005.

The tub placed outside Ms Donaldson’s home is just one of 200 drop-off points around the country.

The underwear is then shipped to over 20 countries, including the Pacific Islands, South East Asia, Africa and Australia where the garments are expensive or unavailable.

Ms Donaldson opened up her home as a collection point after realising there were none in her area of the Blue Mountains.

“After having my first child my bra size changed and I had some really good quality bras, still in great condition and looked up to see if there was somewhere to take bras as a donation,” she said.

In a statement from the Uplift Project, Ms Baker said: “Most Aussie women have one bra in the drawer that isn’t comfortable. It is too expensive to throw away, and the op shop don’t want it. These bras flood in. Businesses have excess stock."

Once donated Ms Donaldson’s job is to separate the donated bras into size and type, according to the needs of the women in each receiving country. 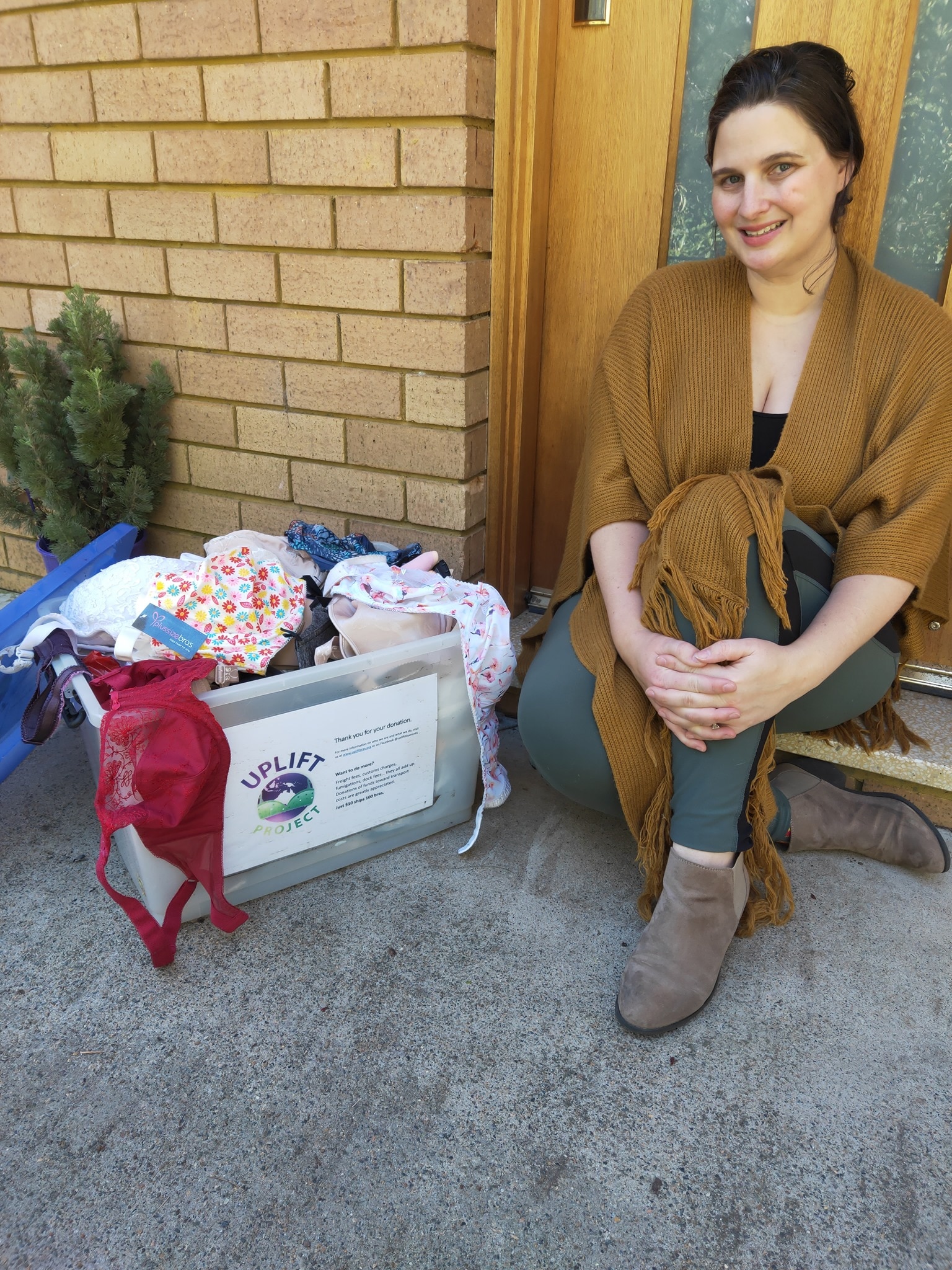 “Sports bras will be sent to sports teams that are third-world, smaller cups might go to the Philippines where women are smaller in structure, whereas larger bras go to Africa or Pacific islands,” she said.

Having access to a bra can drastically improve the lives of some younger women in countries such as Papua New Guinea, Solomons and Fiji, who report wearing up to three t-shirts under a school uniform to disguise breasts.

“Things that we take for granted. Playing sport it does do damage to your breast tissue, you’re running around and they’re going everywhere,” Ms Donaldson said.

“Uplift has worked with several national sports teams from the developing world. Most team members A and B cup women. Beach volleyball is unpleasant without a bra, exercise for cardiovascular health is not likely,” Ms Baker said. For other women, lack of reconstruction following surgery such as a mastectomy can have negative impacts on their life, preventing privacy a bra can afford.

“Just to have one breast and nothing on the other side - you feel broken, you’re not complete,” she said.

“To be able to pass on something that will complete a woman is so valuable. That someone in Africa who has lived for years after losing a breast to cancer and then to finally get something to make them feel whole again as a woman. That’s really important and that’s what inspires me."

“It’s easy to collect bras and package them up, what’s not easy is shipping them,” she said.

“For our receiving organisation, distributing them is the challenge. It can take six to nine months for a small organisation to distribute that volume of stock.

“Our distributors make huge personal commitments to do this work. In extreme cases, bras have been backpacked over mountains and rowed tens of kilometres along coastlines”.

The dream is to open an Uplift Shop in capital cities that employ women from the sex trade or domestic violence, and give them work training and income during rehabilitation, a statement by Uplift Project said.