Voters in the Australian Capital Territory are the first in a major Australian election to be casting their ballots electronically, with coronavirus and climate change key issues on their minds. 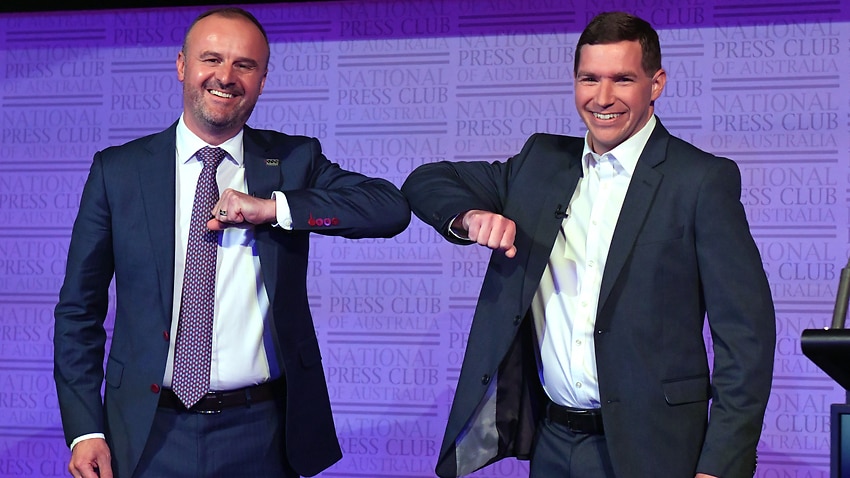 It's an election for Canberrans like no other, and who voters want to lead the Australian Capital Territory for the next four years will soon be revealed.

Amid the coronavirus pandemic, roughly 60 per cent of Canberrans have already voted in Saturday's poll, including electronically for the first time in a major Australian election.

Electronic voting has been available at all early voting centres across a three-week polling period, with instructions available in 12 different languages.

The campaign for control of the ACT Legislative Assembly has cast a Labor government in power for 19 years against a Liberal opposition which is adamant now is the time for change.

Who are the main players?

Labor's Chief Minister Andrew Barr has sought to sell himself as a steady pair of hands to continue leading the territory. He has put forward his response to the COVID-19 crisis and last summer’s bushfires as proof of his party's status as experienced managers of the ACT.

“Experience in government matters, but so too is what your plan for what the future is,” he told SBS News.

“We are seeking the support of the community to continue that experienced and progressive leadership for Canberra.”

The ACT became the first jurisdiction to be free of all coronavirus cases in April and currently has no active cases.

Liberal Leader Alistair Coe argues the recovery from the pandemic presents the chance to choose a new way forward for the territory - campaigning with a pledge to “lower the cost of living” for Canberrans.

Mr Coe says change is needed with too many people “falling behind” as a result of “ever-increasing” taxes, fees and charges under Labor.

“It's so important that we empower families and communities and that's why we are committed to lower taxes and better services,” he told SBS News.

“We want to lower the cost of living - we want to make sure that everyone can get ahead in this city."

His campaign has included a series of political stunts including wearing boxing gloves bearing the campaign slogan "lower taxes and better services" and knocking down a wall of boxes symbolising "smashing" the cost of living.

The ACT is governed by just five electorates that are each represented by five members in the legislative assembly through the Hare-Clarke electoral system.

The system means the territory’s elections are regarded as perennially tight contests.

The ACT’s legislative assembly was most recently made up of 12 Labor, 11 Liberal and two Greens members as part of a minority government in the territory.

The territory is home to some 429,800 people with more than 300,000 eligible to vote under the compulsory voting system.

In the ACT - known for its progressive politics - its Labor government last year met a commitment to power the territory by 100 per cent renewable electricity.

Both Labor and the Liberals have agreed to a target of net-zero emissions by 2045, but each party has made further promises tied to those concerns in the election.

Labor has promised to build a $100 million Canberra-wide network of renewable energy batteries if elected with its capacity set to be larger than South Australia’s Tesla battery project.

Read More
The ACT is now running on 100 renewable electricity

“We think this is a really sensible and practical way that we not only put downward pressure on energy prices,” Mr Barr said. “We create more jobs and we again contribute to reducing our greenhouse gas emissions.”

Mr Coe has offered a different approach, saying the Liberals are committed to “practical measures” such as planting one million trees in a decade and a so-called 'green space guarantee'.

“We're committed to making sure Canberra is a liveable city because we want this place to be the best place to live, work and raise a family," he said.

The Greens, who are led by Shane Rattenbury, are pushing for stronger action on the phasing out of gas use by 2040, helped by a $20 million pledge to assist Canberra businesses and households with switching to electrical appliances.

Voting is one of the most fundamental parts of being a citizen in our country.

I voted today, as early voting is running all the way until election day to make it more COVID-safe for everyone. pic.twitter.com/J7DzKWi8h1

Mr Rattenbury wants the COVID recovery to be harnessed as an opportunity to build a “better normal” through stimulus measures that prioritise social outcomes.

“We need to take bold and decisive approaches to address key underlying problems, be it climate change, be it housing supply and affordability issues be mental health,” he told SBS News.

What are the other key issues?

Amid the economic pressures of the COVID-19 pandemic, the Liberals have also promised to freeze residential rates for four years, and commercial rates for at least two years, and lower car registration fees.

It’s all part of their campaign to deliver “lower taxes and better services” which has been plagued by questions from political opponents about an apparent contradiction of delivering both promises.

With debt and deficit forecasts in the ACT budget reaching record levels, Mr Barr said the Liberals’ promises would undercut the quality of services.

“That's just magic pudding economics, no one takes that seriously,” he said.

Read More
Who are the winners and losers from the 2020 federal budget?

“People are looking for smart, integrated policies that will not only put downward pressure on cost of living but create jobs and help the environment," he said.

Health, education and transport have also formed a focus of the major parties' election campaigns.

Labor has vowed to complete a $500 million upgrade to the ageing Canberra Hospital and is also focusing on recruiting and training healthcare workers.

The Liberals have promised to halve waiting times in emergency departments and for elective surgery, as well as perform a larger upgrade to the hospital, policies labelled unfeasible by Labor.

Read More
It's Australia's most crucial federal budget in decades. Here's what it means for you

The Greens have also highlighted supporting mental health, drug and alcohol services and reducing Indigenous incarceration as concerns that must be addressed.

“Mental health is a real emerging issue in our community and Australia,” Mr Rattenbury said.

“We [also] have a long way to go to breach the gap when it comes to supporting Indigenous people in our community.”