With 38 people killed, Myanmar sees its 'bloodiest day since the coup'

Myanmar has been in chaos since 1 February, when the military launched a coup and detained its civilian leader Aung San Suu Kyi. 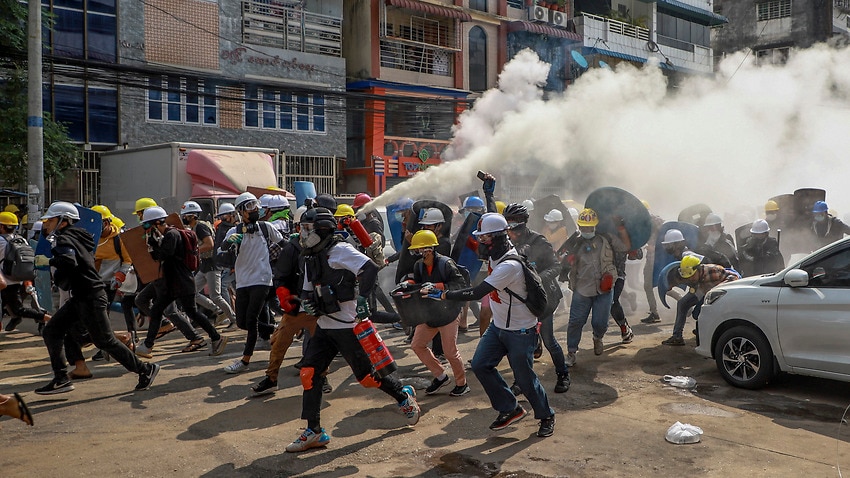 Anti-coup protesters run as one of them discharges a fire extinguisher to counter the impact of tear gas fired by riot policemen in Yangon Source: AP

Myanmar has been in uproar since 1 February when the military ousted and detained civilian leader Aung San Suu Kyi, ending the nation's decade-long experiment with democracy and sparking daily mass protests.

International pressure is mounting: Western powers have repeatedly hit the generals with sanctions, and Britain has called for a United Nations Security Council meeting on Friday.

But the junta has ignored the global condemnation, responding to the uprising with escalating strength.

"Only today, 38 people died," UN envoy to Myanmar Christine Schraner Burgener told reporters on Wednesday, adding that more than 50 people had died in total since the military takeover, with many more wounded.

"Today was the bloodiest day since the coup happened," she noted, without providing any further details, including a breakdown of the deaths.

She called for the UN to take "very strong measures" against the generals, adding that in her conversations with them they had dismissed the threat of sanctions.

'Democracy is our cause'

Earlier, AFP recorded at least 17 deaths across Myanmar on Wednesday, with Monywa in the central Sagaing region registering at least seven.

"What we can confirm is seven people have died," said an emergency doctor, who declined to provide his name.

Multiple medics also said they saw two other individuals being dragged away by security forces, though they could not get close enough to confirm if they had died.

In the outskirts of commercial hub Yangon at least six demonstrators died, according to a rescue worker and local journalist.

Parts of the city were transformed, with protesters using makeshift tyres and barbed wire barricades to block major roads.

Near the famed Sule pagoda intersection, protesters pasted print-outs of junta leader Min Aung Hlaing's face on the ground - a tactic aimed at slowing down security forces who will avoid standing on the portraits.

In Mandalay, Myanmar's second largest city, two demonstrators were killed, a doctor confirmed to AFP, adding that one of the victims was 19 years old and was shot in the head.

"It was my friend who was shot in his forehead and died in the hospital," said Min Pyae Phyo, through tears.

"They shouldn't have used such lethal force against the peaceful protesters. I won't forget and forgive them the rest of my life," he told AFP.

And a demonstration in Myingyan turned deadly when security forces deployed tear gas, rubber bullets and live rounds against protesters carrying red home-made shields emblazoned with the three-finger salute -- a symbol of resistance for the anti-coup movement.

Several medics confirmed a young man was gunned down.

Thein Zw and five other Myanmar journalists had been charged. Source: NurPhoto

"Some were hit with rubber bullets and some were suffocating because of tear gas," a doctor told AFP, saying his private hospital treated 10 injured.

Sunday remains the bloodiest day since the military takeover, with the UN saying at least 18 protesters were killed across the country.

In Dawei Wednesday, one of four gunshot victims from Sunday was cremated.

Mourners held floral wreaths and portraits of Lwin Lwin Oo, 33, as coffin bearers were flanked by hundreds chanting: "We are united, yes we are... Democracy is our cause."

Wednesday's violence came on the heels of news that six Myanmar journalists would be charged under a law prohibiting "causing fear, spreading false news, or agitating directly or indirectly a government employee", according to their lawyer Tin Zar Oo.

According to the Assistance Association for Political Prisoners monitoring group, more than 1,200 people have been arrested since the coup, with about 900 still behind bars or facing charges.

But the real number is likely far higher - state-run media reported more than 1,300 people were arrested on Sunday alone. On Tuesday, media reported that about 500 have been freed in Yangon.