Plastic garbage collected by a women’s group is being recycled into bricks and used to build schools in West Africa.

ABIDJAN, Ivory Coast — She left home before dawn. Her four children were still asleep in her cement block house in Abobo, a maze of shops and houses occupied by dockworkers, taxi drivers, factory laborers, and street sellers.

She and a friend crossed into the upscale neighborhood of Angré, home to doctors and businessmen. They tossed the plastic castoffs of the consumer class into bags slung over their shoulders as the cocks crowed and the sun peeked over villa walls draped with bougainvillea.

Mariam Coulibaly is part of a legion of women in Abidjan, West Africa, who make their living picking up plastic waste on the city streets and selling it for recycling. Now they are lead players in a project that turns trash into plastic bricks to build schools across the country.

They are working with a Colombian company to convert plastic waste - a scourge of modern life - into an asset that will help women earn a decent living while cleaning up the environment and improving education. 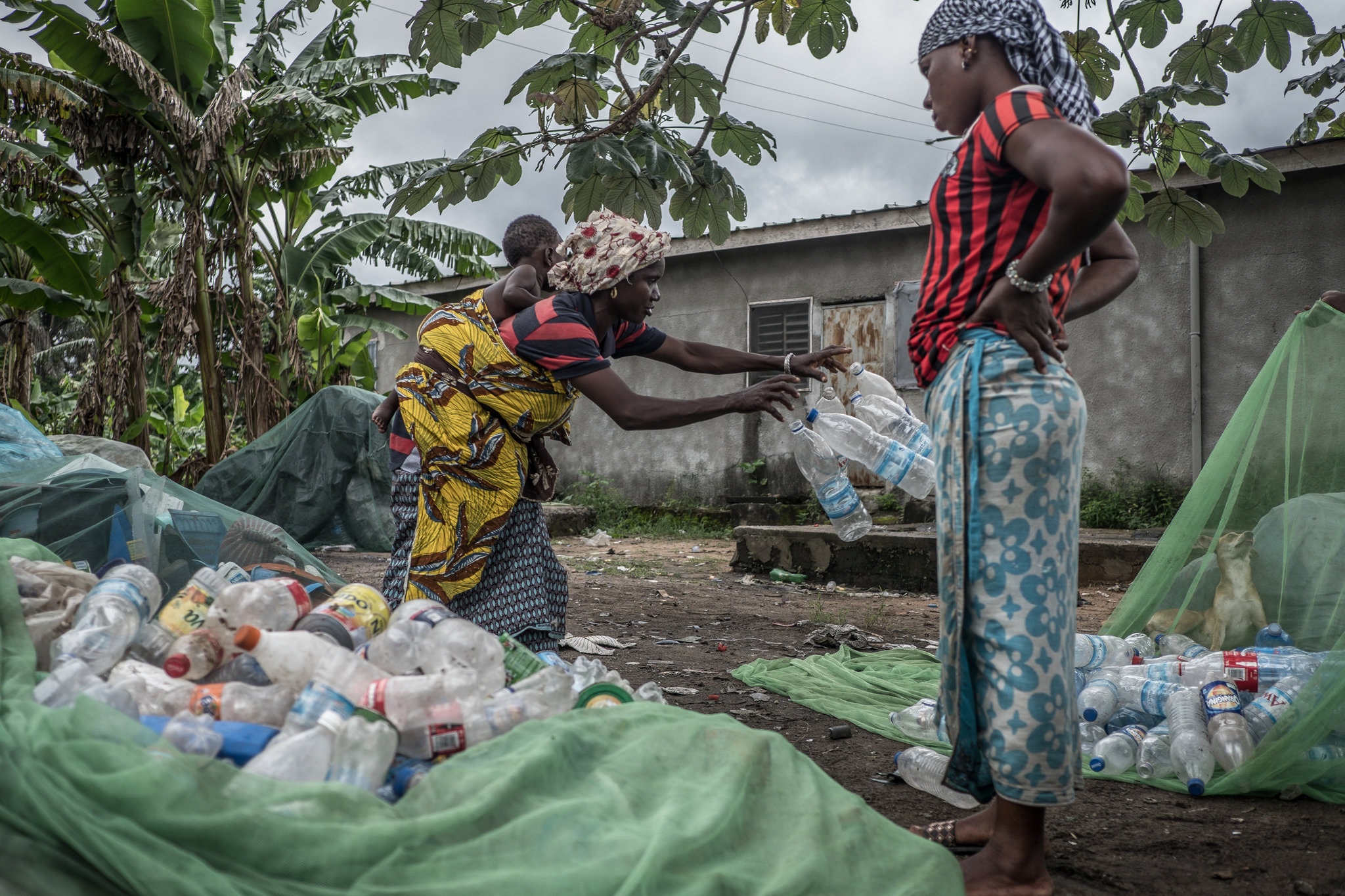 A member of the Abobo women’s association sorts through plastic waste.
The New York Times

She sees it as a chance to better her life, maybe even to rise into the middle class.

“We don’t get good prices” from the current buyers, Ms Coulibaly said. “This will help us.”

In the past year, the venture has built nine demonstration classrooms out of recycled plastic bricks in Gonzagueville, a scrappy neighborhood on the outskirts of Abidjan, and in two small farming villages, Sakassou and Divo.

The first schools were built with bricks imported from Colombia. But in the fall, a factory now rising in an Abidjan industrial park will begin making the bricks locally.

The new plastic-brick classrooms are badly needed. Some classrooms now pack in 90 students, according to the country’s education minister.

The company building the factory, Conceptos Plásticos, has a contract with UNICEF to deliver 528 classrooms for about 26,400 students, at 50 students per classroom. Students play outside new school classrooms made out of plastic bricks in Abidjan, Ivory Coast.
The New York Times

In the tiny village of Sakassou, people draw water from the well with a foot pump, raise pigs and chickens, and cook over open fires. Until this year, the children went to school in a traditional mud-brick and wood building. The mud-brick eroded in the sun and rain and had to be constantly repaired.

But the three new plastic classrooms could last practically forever. The interlocking bricks look like black and gray Legos. They are fire retardant and stay cool in hot weather. The other day, villagers used one of the brightly decorated classrooms to hold a village meeting. A look inside a Cambodian cafe built out of rubbish

The project would be impossible without the organizing skills of Ms. Coulibaly, president of a 200-strong women’s community association called “The Fighting Women.”

She has been collecting trash for about 20 years, since she was 15. Her husband drives a woro-woro, a shared taxi.

After collecting trash the other morning, she went home to do the housework, then returned to work at night, this time in the vast open-air market of Adjamé at closing time.

She and other women waltzed through dimly lit alleyways, past the fishmonger and the tailor still bent over his sewing machine. They even picked up the small bags of plastic used to sell a quick gulp of water on the street. While the women wait for the factory to open, they sell their plastic to middlemen - most are men - at a recycling market in Abobo-Baoulé.

On a recent Saturday, one of the buyers, a former yam pushcart vendor named Sidibé Moussa, weighed each woman’s plastic harvest by hanging it from a hand-held bronze scale. He resells the plastic to a factory that recycles it into chairs, sandals, and basins. Bottles are often washed, filled with juice and resold on the street.

At the recycling market, the women multitasked, drying attiéké, a manioc couscous, on plastic tarps spread on the ground among the palm trees and the mesh bags of plastic waste. Women and children crushed aluminum cans by hand, pounding them with the same type of large wooden pestles used to make foufou, a staple made of plantains and cassava. The interior of the first classroom built out of plastic bricks in the school in Gonzagueville.
The New York Times

The country’s official minimum wage is roughly $25 per week, though many people earn far less. The women say they earn $8.50 to $17 a week.

Ms Coulibaly puts her money into private school tuition for her three school-age children, who tell her they want to become a pilot, a doctor and a police officer.

The women in the association each contribute some money to a fund which is then redistributed, ensuring that even a woman who is sick will receive some income.

When they start selling to the factory, they may be able to double or triple their income, the company says. That’s because the factory will buy types of plastic, like snack packaging and cellphone parts, that the women cannot sell now. 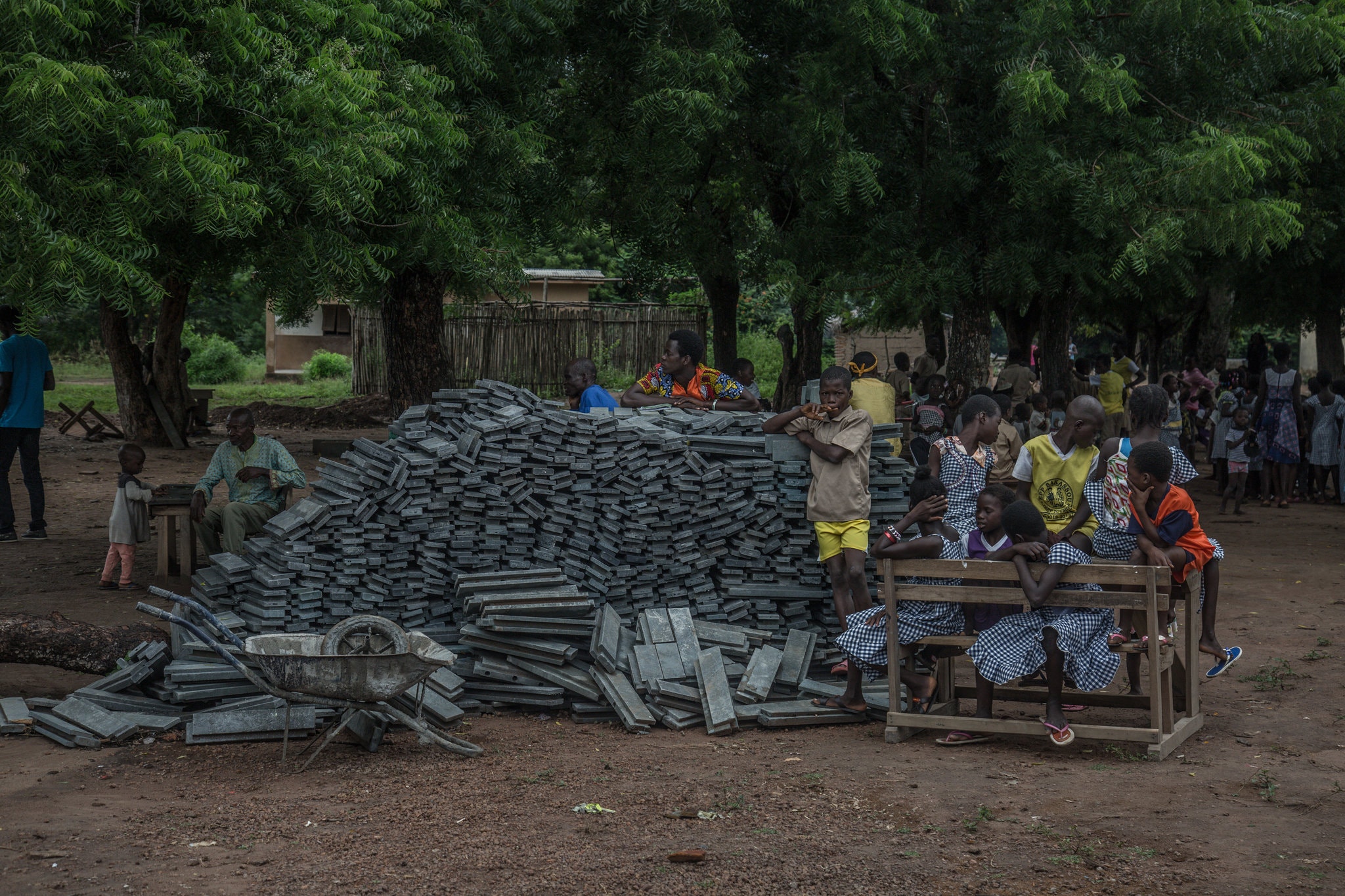 Students and residents gathered by plastic bricks outside their school in the Sakassou village.
The New York Times

Some of Ms. Coulibaly’s neighbours have suggested that she and the other women will be exploited. But she said she is confident that the project will deliver the higher pay, equipment and sacks that have been promised.

The project has the blessing of Kandia Camara, Ivory Coast’s outspoken education minister, who says it can only lift women up.

“For us, it’s not a humiliating profession,” Ms. Camara said in an interview at her office, decorated with photographs of her with other prominent women, like Ivanka Trump and Christine Lagarde, the former chairman of the International Monetary Fund. “It is a job organized for them, their financial autonomy, dignity, family, society, and their contribution to the development of the country.”

The project was the brainchild of Aboubacar Kampo, a medical doctor, who just ended a term as Ivory Coast representative for UNICEF. He recruited Conceptos Plásticos, a for-profit plastic recycling company with a social mission of building housing and creating jobs for poor people.

The founders of the company, Oscar Andrés Méndez and his wife, Isabel Cristina Gámez, agreed to work with Dr. Kampo after visiting Ivory Coast last year.

They were moved by the sight of women, carrying babies, picking up trash in Akouedo, a landfill notorious as a dumping site for hazardous waste, and thought they could help.

“It had a big impact for us,” Mr Méndez said. Oscar Méndez (centre) is building a factory in West Africa that will manufacture bricks from recycled plastic.
The New York Times

The couple moved to Abidjan in June to get the project up and running, and they are planning to expand into other parts of West Africa.

They expect to employ 30 people at the factory and to buy plastic from about 1,000 women in its first year of operation.

He expects the price to drop about 20 percent when the bricks are made locally. 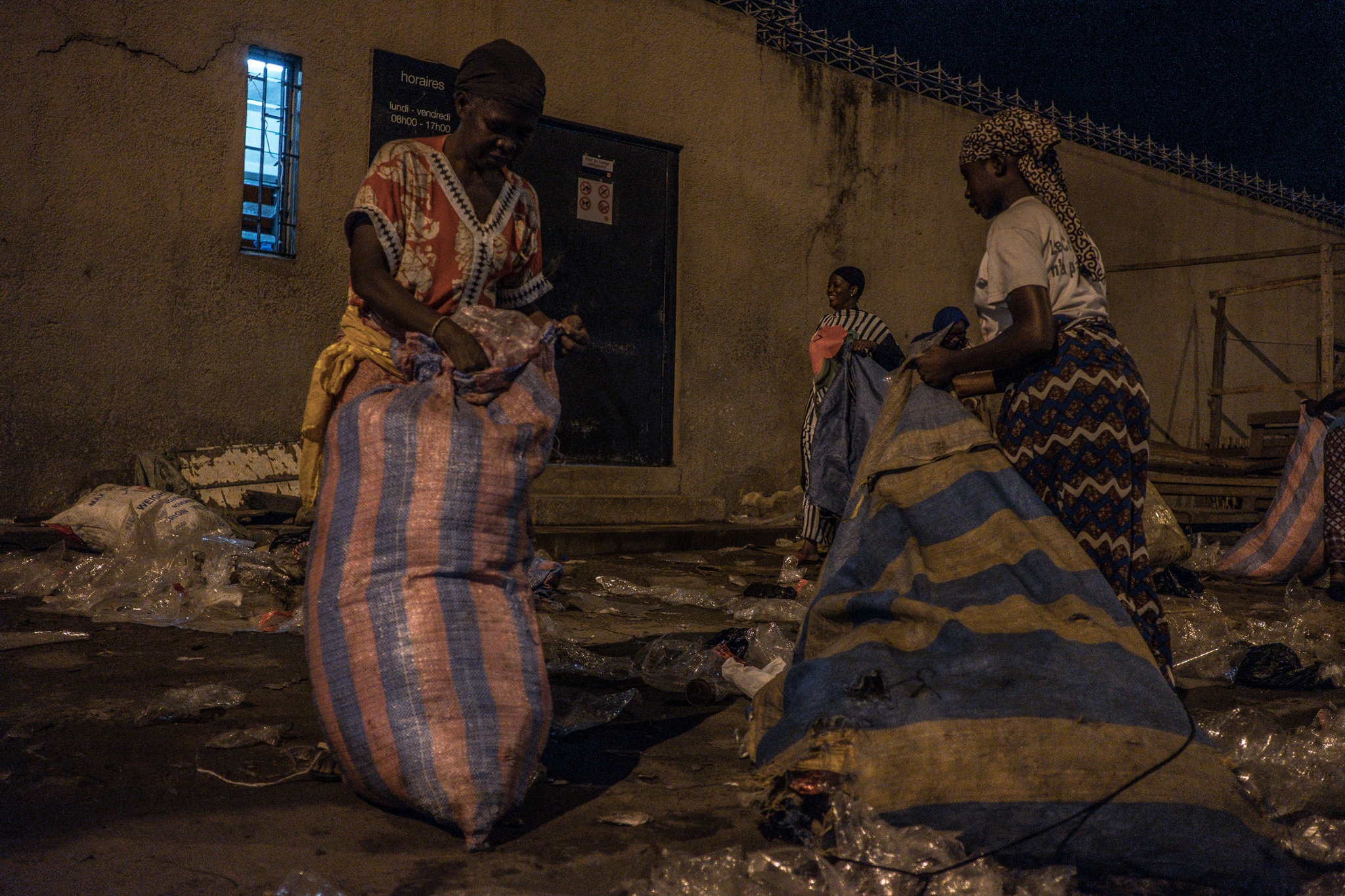 The “Fighting Women” association collects plastics at the Adjame Market for several hours at night.
The New York Times

There is no shortage of plastic waste. Abidjan produces about 300 tons of it a day, but only 5 percent of it is recycled, the project organizers say. Each classroom takes about five tons of plastic trash to build.

Dr Kampo envisions expanding to plastic housing for teachers and latrines for schools. The teachers in Sakassou share houses while their families are housed in other villages. In Gonzagueville, there are 14 latrines for 2,700 children and their teachers.

Before all this happened, the leader of the Fighting Women had been considering a new line of work: selling cold drinks.

But now, Ms Coulibaly says, “We think there is a future in plastic.”