The team spent over a month learning the song so they could surprise their deaf team mate with a touching Auslan rendition. 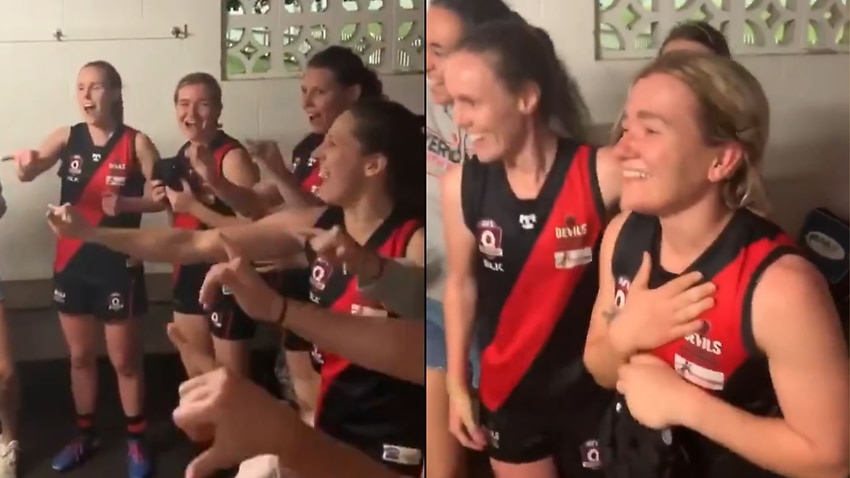 A women’s AFL team in Brisbane has stunned one of their players by performing an Auslan rendition of their team song.

Celebrating a win in the QAFLW league, players and staff from the Yeronga South Brisbane Devils Football Club celebrated the victory with a rousing performance of their anthem.

In addition to belting out the vocals, every single player and staff member sang the song in Auslan sign language.

The gesture visibly moved teammate Jamie Howell, who is deaf and wears a cochlear implant on and off the pitch.

A video clip of the celebration was shared by the AFL Women’s league, drawing praise from across the football community.

“It was a total surprise!” Ms Howell told SBS News.

“All sixty-plus girls and coaches managed to learn the song without me knowing.

“I was so surprised, overwhelmed and incredibly amazed that these girls put in the effort to learn the team song in Auslan and make me feel included.”

Auslan - or Australian Sign Language - is the preferred language of some 10,000 Australians.

Ms Howell has been heavily involved in sport, representing Australia in athletics at the 2015 Asia Pacific Deaf Games and the Deaflympics in 2017.

She began playing AFL this year, and is “absolutely loving” her first AFL club.

Club captain and friend Mia Walsh tempted her to make the code switch and helped orchestrate the Auslan performance.

“She's so brilliant, brilliant, and she's been a complete asset to this team,” she said.

“One of the other players, knows an interpreter, and we were thinking how we can possibly get something interpreted that as the club that we could learn a surprise for Jamie.

“We thought, what about the club song?”

Just a few hours of practice, with some help from Paul, our Auslan interpreter, 65 players across our squad learning the song... priceless ❤👌 #inclusion https://t.co/ybPBfyLVRf

The team’s players and staff spent over a month secretly learning and rehearsing the song in Auslan.

A thumping home victory for Jamie’s team provided them with more than enough reasons to celebrate.

“We all rushed to the shed, and yeah, the excitement in that room was just enormous,” Ms Walsh said.

“Her face was in absolute shock and overwhelmed and I'm hoping what she felt was just so much support most towards her.”

The new Auslan anthem is likely to become a regular part of post-match celebrations at the Yeronga Devils.

“We're looking at getting it translated, and put up on the wall with Auslan symbols, so that everyone can learn it,” Ms Walsh said.

There are also plans to teach the song to the men’s and junior teams to help foster an inclusive atmosphere.

“Jamie talks so fondly of how much the deaf community has have felt supported through us doing that video,” Ms Walsh said.

“I think sometimes you have this amazing plan to surprise one person that actually touches many, many more than that.”