Women who work in Kabul government told to stay home

The decision to prevent most female Kabul city workers returning to their jobs is another sign the Taliban are enforcing their harsh interpretation of Islam. 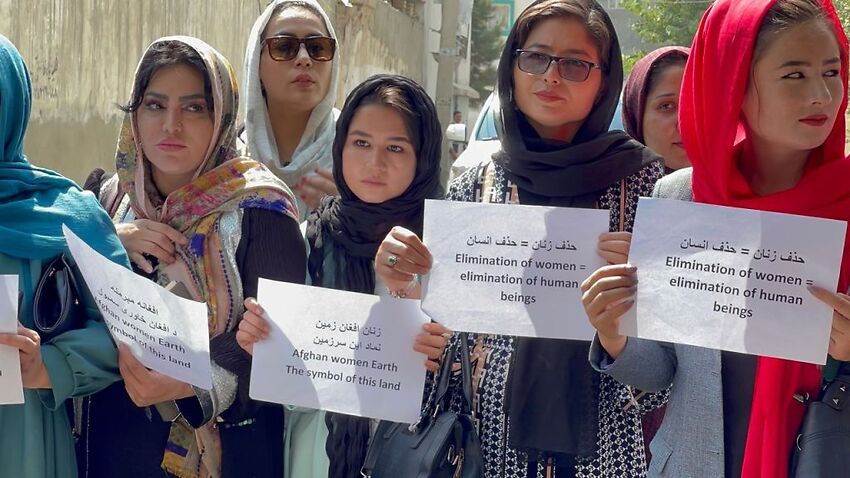 Afghan women activists call for rights and justice in front of the former ministry of women affairs in Kabul. Source: Anadolu

Female employees in the Kabul city government have been told to stay home, with work only allowed for those who cannot be replaced by men, the interim mayor of Afghanistan's capital says.

The decision to prevent most female city workers from returning to their jobs is another sign the Taliban, who overran Kabul last month, are enforcing their harsh interpretation of Islam despite initial promises by some they would be tolerant and inclusive.

In their previous rule in the 1990s, the Taliban barred girls and women from schools, jobs and public life.

In recent days, the new Taliban government issued several decrees rolling back the rights of girls and women.

It told female middle and high school students they could not return to school for the time being, while boys in those grades resumed studies this weekend.

Female university students were informed that studies would take place in gender-segregated settings from now on, and they must abide by a strict Islamic dress code.

Under the US-backed government deposed by the Taliban, university studies had been co-ed, for the most part.

A handful of women staged a silent protest for their education rights at an entrance to a shopping mall outside the Ministry of Education in Kabul on Sunday. Some had taped their mouths shut while others held banners saying "girls should go to school".

The protest came a day after some girls returned to primary schools, but older girls faced an anxious wait with no clarity over when they can resume studying. Source: Anadolu

On Friday, the Taliban shut down the Women's Affairs Ministry, replacing it with a ministry for the "propagation of virtue and the prevention of vice" and tasked with enforcing Islamic law.

On Sunday, just over a dozen women staged a protest outside the ministry, holding up signs calling for the participation of women in public life. "A society in which women are not active is (sic) dead society," one sign read.

"The Ministry of Women's Affairs must be reactivated," said Baseera Tawana, another of the protesters outside the building. "The removal of women means the removal of human beings."

Female staff said they had been trying to return to work at the ministry for several weeks since the Taliban takeover last month, only to be told to go home.

The protest lasted for about 10 minutes. After a short verbal confrontation with a man, the women got into cars and left, as Taliban in two cars observed from nearby.

Over the past months, Taliban fighters had broken up several women's protests by force.

Elsewhere, about 30 women, many of them young, held a news conference in the basement of a home tucked away in a Kabul neighbourhood.

Marzia Ahmadi, a rights activist and government employee now forced to sit at home, said they would demand the Taliban re-open public spaces to women.

"It's our right," she said. "We want to talk to them. We want to tell them that we have the same rights as they have."

Most of the participants said they would try to leave the country if they had an opportunity.

Also on Sunday, interim Kabul Mayor Hamdullah Namony gave his first news conference since being appointed by the Taliban.

He said that before the Taliban takeover last month, just under one-third of close to 3,000 city employees were women, and they had worked in all departments.

Mr Namony said the female employees have been ordered to stay home, pending a further decision.

He said exceptions were made for women who could not be replaced by men, including some in the design and engineering departments and the attendants of public toilets for women.

With Reuters and SBS News