Crossbench senator Nick Xenophon is the latest Australian politician caught up in the dual-citizenship scandal and will be referred to the High Court.

Senator Nick Xenophon, the latest Australian politician caught up in the dual-citizenship scandal, has described it as a "festering farce" and attacked his opponents for spending hours trying to knock him off.

The crossbench senator revealed he was a British overseas citizen by descent on Saturday as a result of his father emigrating to Australia from a British territory.

Senator Xenophon will refer himself to the High Court, sitting as the Court of Disputed Returns, when parliament resumes in two weeks time and says he will continue to vote in the Senate. "The legal advice I have had is that I should just keep calm and carry on and wait for the High Court to determine this," he told the Nine network on Sunday.

He said the citizenship issue that brought up the eligibility of seven MPs and senators has become a mess.

"It's interesting that my political opponents would have spent many hours and days digging this up and doing the research," he said.

"I think no wonder so many Australians hate so many politicians because they are too busy trying to knock each other off than fixing the nation's problems."

It comes after Deputy Nationals Leader Fiona Nash revealed on Friday she was a UK citizen by descent. She' was the third member of Malcolm Turnbull's cabinet to be affected.

The High Court will undertake the first hearing on Thursday but it could be months before it makes a decision.

Mr Joyce's situation puts the government's majority of one seat in the House of Representatives at risk should there be an adverse ruling by the High Court.

Senator Xenophon said Mr Joyce's decision not to stand down is causing disruption on the floor of the House of Representatives.

"It would probably be simpler for the government if the ministers stood aside but it's really a political issue, not a legal issue," he later told Sky News.

"That is what has fuelled the political fire here, the fact that one National minister (Senator Canavan) stepped aside, the others didn't."

Senior National MP Darren Chester conceded it had been a "rotten few weeks".

"We need to be better at our vetting process when people nominate to be a candidate," he told the Nine network.

The transport minister agreed with Senator Xenophon's thoughts about Labor staffers or others beavering behind the scenes to try and uncover things about him, saying it reflected poorly on the opposition.

"Rather than indulge in the dark arts and shifty behind the scenes, Bill Shorten and his crew need to be up front." 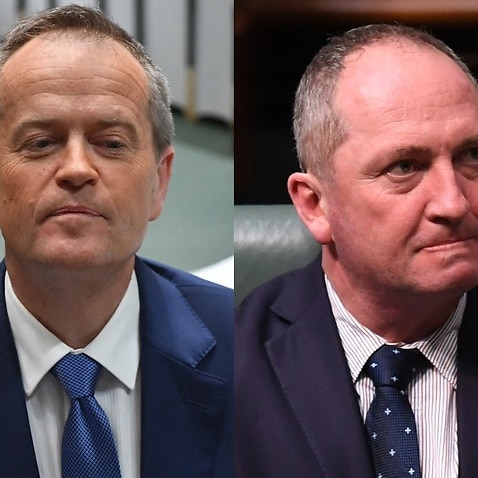 Joyce should 'do the right thing' and stand aside, says Shorten