Star student Vanisre Rajasegaran, 18, will now be free to finish her final high school exams without the threat of deportation looming over her.

A Victorian family of four will be allowed to remain in Australia after Immigration Minister David Coleman intervened to grant them permanent residency, just days before they were set to be deported.

Vanisre Rajasegaran, who lives in Warrnambool on Victoria's Great Ocean Road, was in her final months of Year 12 and looking forward to sitting her final exams in October when she was told her family would be forced to return to Singapore, the country they left seven years ago.

Vanisre's father suffers from a kidney condition which meant he failed the government's immigration health requirement, which aims to prevent people from migrating to Australia who's health care could pose a significant cost to the taxpayer. 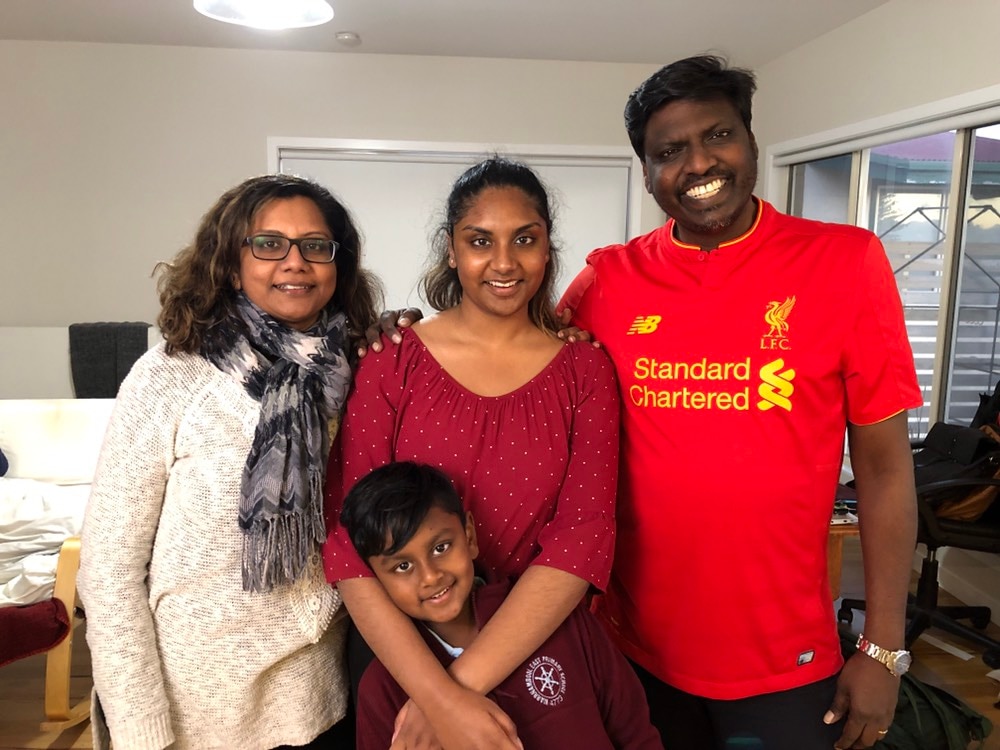 The Rajasegaran family at their home in Warrnambool after hearing the good news.
SBS News

Under the regulations, if one family member fails the requirement the entire family must have their visas rejected.

Vanisre, who is a member of her school's student council, was doing her homework in one of the counselling rooms at school on Friday when she heard the news that her family would be able to stay.

"I got this text from a family group chat in Singapore and I didn't know if it was real ... so I immediately called dad and he was screaming on the phone and I was absolutely shocked, in joys, in tears.

"My family and I have worked so hard for seven years to get where we are today, with the support of the community and everyone else, it is truly amazing." 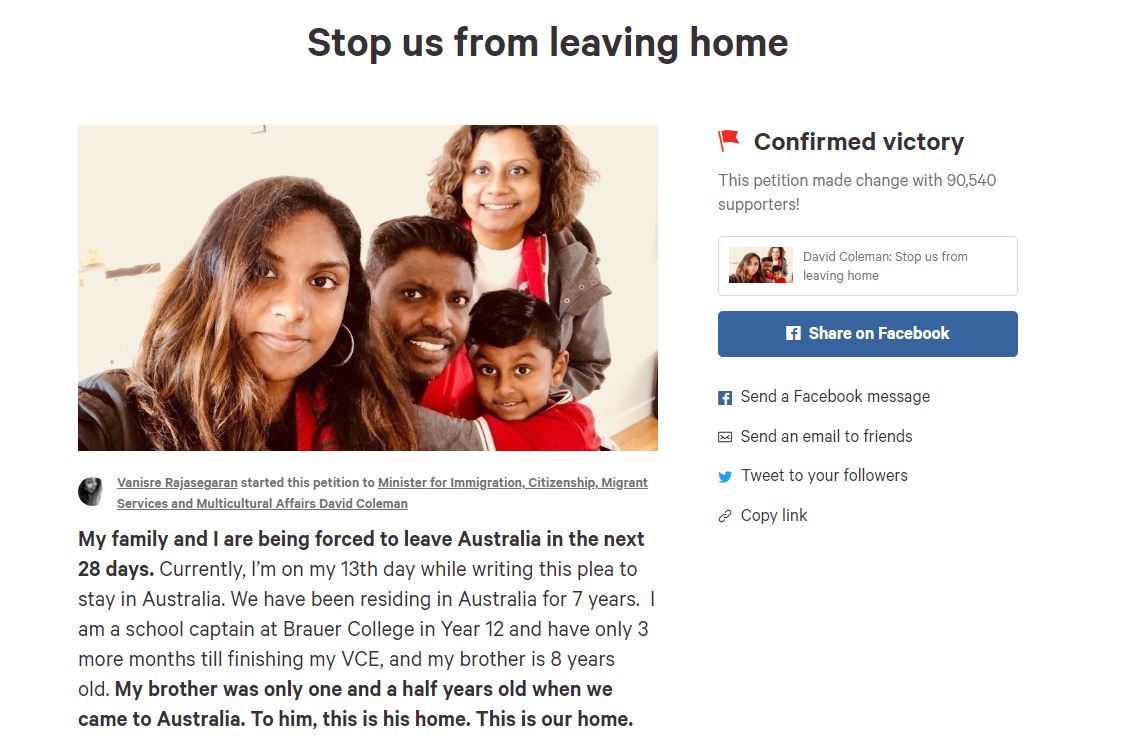 The petition surpassed it's goal of 75,000 signatures.
Change.org

The school captain said it feels like a "big weight is off her chest" and she can now focus on her VCE exams (the Victorian equivalent of the HSC) coming up in two months.

"I can focus on what needs to be focused on, like my VCE, which is much more important at the moment, to decide how to plan out my future," she said. 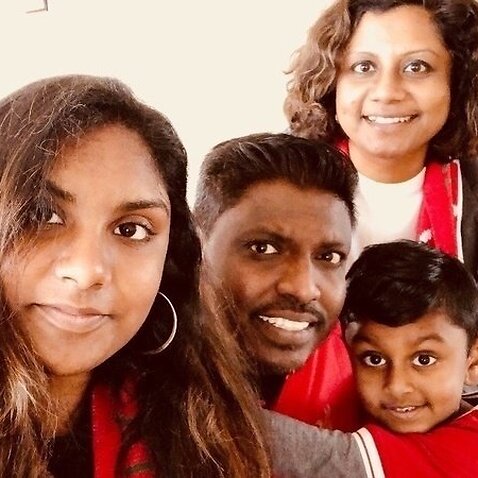 Late last month, after being told they would be deported on the 21 August, Vanisre created an online petition which garnered more than 90,000 signatures - 15,000 more than the target - and a swell of public support.

In response, the family's local MP and federal education minister Dan Tehan said earlier this week that the support for the family was pointing to "a positive outcome".

Rajasegaren Manikam, Vanisre's father, said he the family was receiving "calls after calls" from family, friends and members of the community who were overjoyed to hear the news. 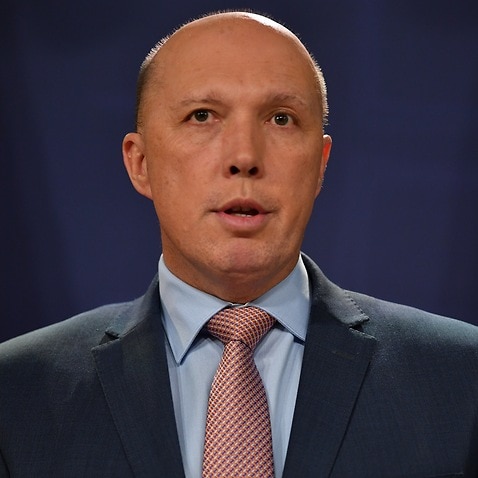 "I was very surprised to hear the decision had been overturned but I think justice has prevailed," he said.

"It's a beautiful thing, we have a future for our kids - this is what we fought for, our kids get to chase their dreams, they can do what they want to do in this beautiful land."

The family had previously appealed to the Administrative Appeals Tribunal after their bid for permanent residency was rejected, but it was dismissed.

Earlier this month the government quietly relaxed the regulations underpinning the migration health requirement after decades of campaigning by disability and immigration advocates.

As part of this change, the significant cost threshold was raised to $49,000.

The family said they now hope to take a "well-deserved vacation" after being unable to travel outside Australia while their claim was processed. 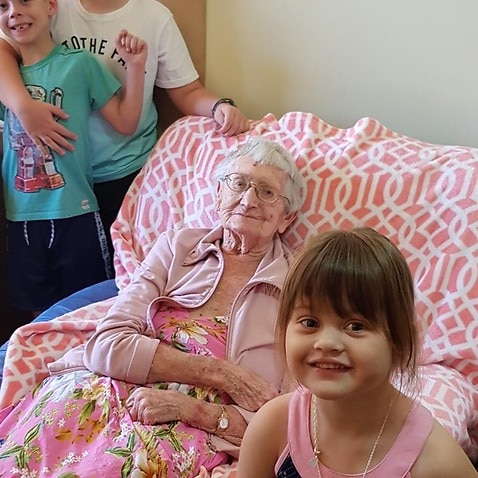 Last week the Department of Home Affairs said it did not comment on individual cases.