An Israeli satirist living in Berlin has created a work which juxtaposes Holocaust memorial selfies with images of the actual Holocaust.

Berlin's Holocaust Memorial, close to the Brandenburg Gate and the nation's parliament, stands as a sober memorial to the millions of victims of the Holocaust, the majority of whom were Jewish, with many also targeted for their political views, sexuality or ethnicity.

Just meters from the site of Adolf Hitler's bunker, 2,711 grey concrete blocks stand in a grid formation atop a small museum.

"The effect is that of inner dislocation in a destabilising maze as the ground is uneven and the blocks vary in height and size," the City of Berlin states. "An ideal setting for quiet contemplation."

Or, it would seem, a selfie.

From Facebook to Instagram, Tinder to Grindr, social media sites are awash with people posing for selfies at the memorial site.

It's those selfies which Israeli satirist Shahak Shapira has targeted in a confronting project, whereby the smiling images have been Photoshopped in with far more graphic images of the Holocaust.

A man juggling pink balls in the memorial is transported to a trench piled with bodies.

A woman performing a handstand is juxtaposed with a room filled with emaciated corpses.

In the 12 hours since a site hosting the images launched, it's been visited by more than half a million people, Mr Shapira's publicist told SBS.

The artist took the photos from social media without asking permission, and said he has so far received at least one request for removal of an image.

"He wasn’t angry, he understood what I had wanted to do with the project," the 28-year-old told The Guardian.

"No historical event compares to the Holocaust. It's up to you how to behave at a memorial site that marks the death of 6 million people," the artist says on the Yolocaust website.

"Some people's behaviour at the memorial site is indeed disrespectful. But the victims are dead, so they're probably busy doing dead people's stuff rather than caring about that." The concrete slabs of Germany's national Holocaust memorial sit near the Reichstag dome and the Brandenburg Gate in Berlin. [File Image May 3, 2005]
AP Photo/Herbert Knosowski

The launch of the site comes amid a political stoush over the monument prompted by comments from a politician in the far right 'Alternative for Germany' party.

"We Germans are the only people in the word who have planted a monument of shame in their capital city," Björn Uwe Höcke said. 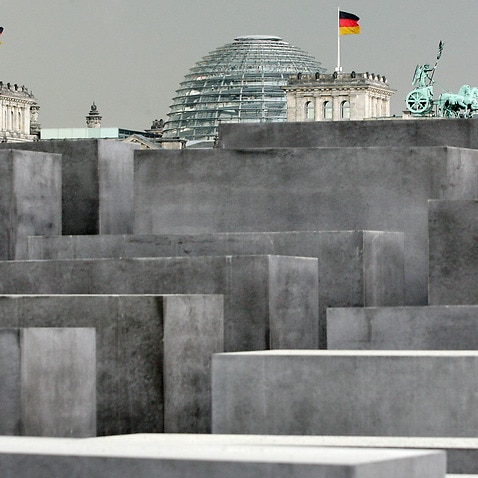 The comments provoked public outrage and condemnation from other politicians, including vice chancellor Sigmar Gabriel.

"This is not just some kind of provocation," Gabriel wrote on Facebook, describing the comments as 'shocking'.

"We must never let this kind of demagoguery be undisputed." New tribute to Holocaust victims opens at AWM in Canberra