Prince Harry and Meghan have met some of Victoria's young innovators and entrepreneurs at a Government House reception. 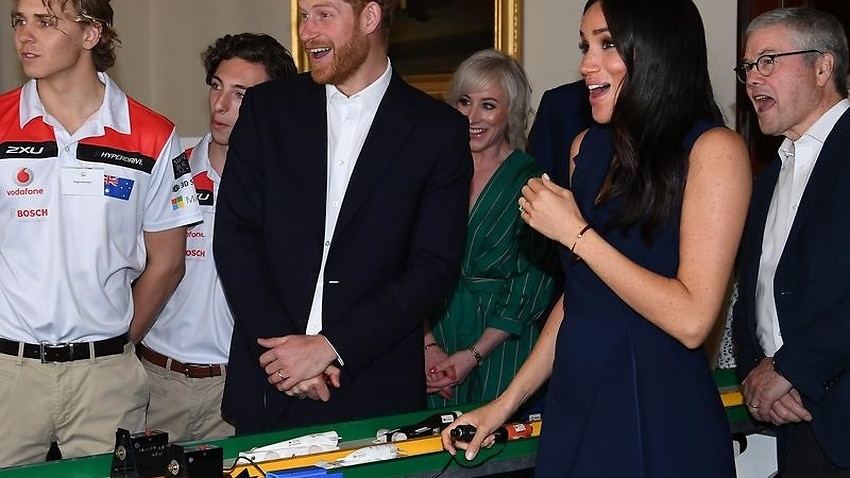 Prince Harry and Meghan were surprised during a race car demonstration in Melbourne. (AAP)

The Duke and Duchess of Sussex got to have a little fun during an official reception at Government House in Melbourne.

Among the 350 guests were Trinity Grammar students showing off their award-winning miniature F1 cars.

Harry pumped his fist when they were invited to try out the cars and the pair jumped in surprise at how fast they moved along a track set up on a dining table.

The Duke and Duchess of Sussex were able to meet the young Victorians behind several innovative and entrepreneurial endeavours at the reception in the ballroom.

They included Hunter Johnson, who has been recognised by the Queen's Young Leaders program for his efforts running The Man Cave, a preventative mental health program for teenage boys.

Marita Chen, the 2012 Young Australian of the Year, demonstrated the Teleport robot which has been designed to help kids keep up with school while in hospital and allow elderly people to socialise.

The royal couple was also introduced to the founders of Farmwall, which makes vertical, edible aquaponic farms designed to grow in cafes and restaurants.

Harry asked whether the miniature indoor farms could be set up in people's homes, while Meghan wanted to learn more about the nutrients the plants relied on to grow inside.