10 things you should know about the National Apology 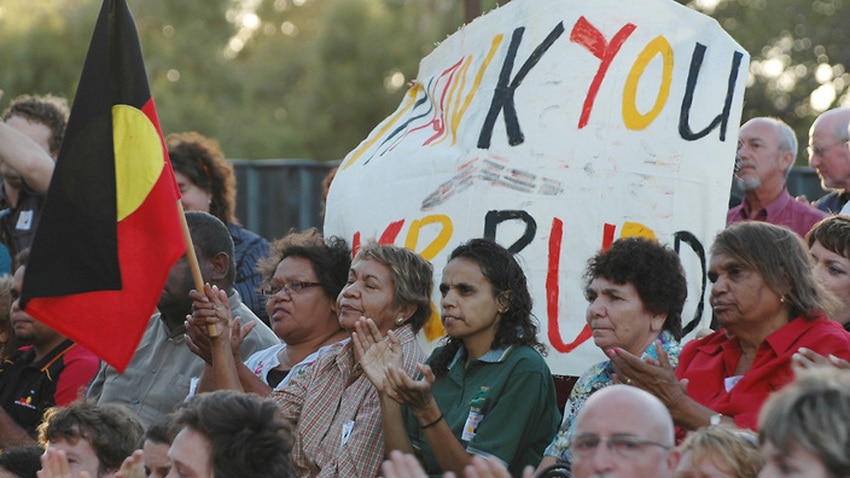 On 13 Feburary 2008, then-Prime Minister Kevin Rudd delivered an empassioned speech apologising to the Stolen Generations on behalf of the Australian Government.

In an interview on ABC's Radio National Kevin Rudd's former speechwriter James Button revealed that Rudd could, at times, have upto four people writing one script for him, criticising the 'slice and dice' practice.

However, his most famous speech, the apology speech, had a few small contributions, but was largely written by himself.

James Button told ABC's Mark Colvin that he found Rudd's usual way of writing speeches rather strange, but the apology speech was an exception.

"The mystery, to me, of Kevin Rudd is the apology speech, because it is a very fine speech; I really do admire that speech," Button said.

A number of liberal MPs did not attend this historic moment in Australian Government including the current Minister for Immigration and Border Protection.

On 9 year anniversary of The Apology worth remembering MPs who boycotted:

2. You should know that... 'Sorry Day' and the anniversary of the National Apology are two separate days

'Sorry Day' is actually held on the 26 May -  and has been since 1998. The first Sorry Day took place one year after the tabling of The Bringing Them Home Report in Parliament and having a day of commemoration was actually one of the recommendations within the report.

7a. That the Aboriginal and Torres Strait Islander Commission, in consultation with the Council for Aboriginal Reconciliation, arrange for a national 'Sorry Day' to be celebrated each year to commemorate the history of forcible removals and its effects.

The anniversary of the National Apology is a day which commemorates the event which Kevin Rudd - The Prime Minister of Australia - made a formal apology to Australia's Indigenous Peoples' and those whose lives had been blighted by past government policies of forced child removal and assimilation.

3. You should know about... the Bringing Them Home Report

The National Inquiry into the Separation of Aboriginal and Torres Strait Islander Children from Their Families was established by the Federal Attorney-General in 1995. It was conducted by the Human Rights and Equal Opportunity Commission (HREOC) and their final report, titled The Bringing Them Home report, was tabled in parliament in 1997.

The report identified that;

For many children removed there were breaches of fiduciary duty and duty of care, as well as criminal actions.

The report also handed down 54 recommendations in response to these findings, many of which have not been  implemented by any government since.

4. You should know that... The National Apology is not intended to 'forgive and forget'

Kevin Rudd's apology is not the end of the matters of the Stolen Generations. An apology and acknowledgement for the Stolen Generations was one fifth of one recommendation from the total 54 recommendations included in The Bringing Them Home report. Rudd was meant to fulfilling a step in a guided process of reparation against human rights, not persuading Indigenous people to, 'Get over it', 'Move on', 'Let it go' or 'Forgive and Forget'.

That, for the purposes of responding to the effects of forcible removals, 'compensation' be widely defined to mean 'reparation'; that reparation be made in recognition of the history of gross violations of human rights; and that the van Boven principles guide the reparation measures. Reparation should consist of: 1. acknowledgment and apology; 2. guarantees against repetition; 3. measures of restitution; 4. measures of rehabilitation; and 5. monetary compensation.

5. You should know that... The rates of Indigenous child removal today are higher than at any point in Australia's history

An explainer by SBS Insight wrote,

Since Kevin Rudd made the National Apology to the Stolen Generations in 2008, that number has risen by 65 per cent.

Even though Aboriginal kids make up just 5.5 per cent of children aged 0-17 years in Australia, they represent 35 per cent of those placed in out-of-home care.

There are claims that there are more Indigenous children being removed today than any other time in Australian history. It's difficult to know, given many records prior to the early 90s were destroyed or kept erratically, but in 1993 there were only 2,419 Indigenous kids in out-of-home care."

6. You should know about... These songs

Songs have always been a unique and important method of storytelling, and for helping people find empathy for the experiences of others. Never has this been more true than the impact these songs have had on the national consciousness.

7. You should know that... 'Sorry' is not just an admission of guilt, it is also an expression of sorrow

Kevin Rudd did not apologise on behalf of every non-Indigenous Australian citizen, he did so on behalf of the Government. The Government, along with the Church, were the two main organisations who hold a level of culpability for the Stolen Generations. Individual Australians, however, can still acknowledge the pain and suffering caused.

8. You should know that... 'Sorry' is an important part of healing

Even though there are many legitimate reasons to feel let down by the apology, and the lack of action since then, it is still important to acknowledge the emotion felt by the many survivors who felt their stories had finally been acknowledged on this day, and by the many other Australians who joined in.

As Steve Bunbadgee Hodder Watt wrote in The Guardian today,

"It wasn’t all protest, division and anger though. Schoolchildren of all backgrounds waved Aboriginal flags while Kutcha Edwards and John Butler sang the Aboriginal land rights anthem, From Little Things Big Things Grow. Strangers felt closer to one another as a sense of unity washed over the crowd. The elderly survivors cried and embraced each other.

It was easy to get caught up in the emotional grandeur, or even the novelty of the day, but the occasion carried extra weight for our peoples. It isn’t often that we get to celebrate the official, widespread acknowledgement of an injustice, especially with the non-Indigenous community celebrating alongside us. I can count on my hands the brief moments in Australian history where we actually became lost in a sea of collective emotion."

9. You should know about... the Healing Foundation

The Healing Foundation was established in 2009, one year after the Apology. According to their website, "The Healing Foundation is a national Aboriginal and Torres Strait Islander organisation that partners with communities to address the ongoing trauma caused by actions like the forced removal of children from their families. Our work helps people create a different future."

10. You should know about... the Stolen Generations' Testimonies website