Previous Next Show Grid
Previous Next Hide Grid
Image 1/
Video
Audio
A new method for pinpointing the geological origins of ochre found in Indigenous Australian artefacts has been found.
By
Rachel S. Popelka-Filcoff

The technique relies on RNA (a form of genetic material) from soil microbes to identify the ochre source.

This provides a fresh approach to understanding the inherent “fingerprint” of the origins of the natural pigment, and a new tool in the kit for the analysis of archaeological materials.

It can help us look back in time to see from where ochre was sourced, and how it may have been exchanged by Indigenous Australians.

Read more: Buried tools and pigments tell a new history of humans in Australia for 65,000 years

The complexity of ochre

Natural mineral pigments such as ochre are the palette of cultural expression for Indigenous Australians, from when their forebears first arrived on this continent, and still today.

The intense colours stand the test of time for illuminating traditions. Although universally used across Australia, the minerals are obtained from specific, culturally significant locations. These pigments were exchanged across the continent as part of cultural exchangeover many thousands of years.

Ochre itself is a complex chemical mixture of minerals, ores and weathered materials that are representative of its genesis and history.

But similar to other soils and geological materials, ochre also contains once-living, or still alive components, such as bacteria, fungi and plants.

All of these microorganisms are a source of genetic materials such as DNA and RNA: together, they generate a rich data set to compare and identify ochre samples. The pattern of biological components in ochre reflects the genesis and history of that ochre.

In the case of Indigenous natural mineral pigments, records that describe the first points of interaction between Europeans and Indigenous Australians document extensive cultural exchange in ochre along established routes. In some cases, these were known to extend hundreds of kilometres.

Regardless of whether these routes were relatively local or across the continent, the majority of them are now lost post-European contact. In addition to material exchange of pigments and other materials, these exchange networks promoted interchange of cultural networks and communities, and are an important part of Indigenous Australian culture. 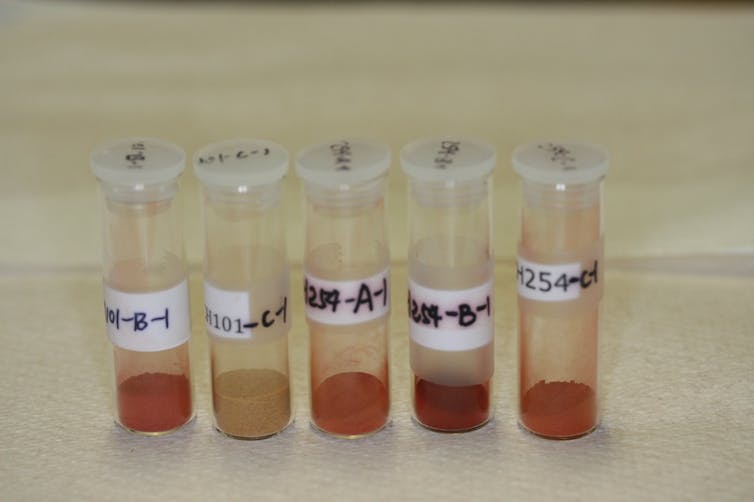 Similarly to a forensic investigation, advanced archaeological science methods can be used to uncover the original “fingerprint” and therefore the original source of the raw materials, and potentially reconstruct these exchange networks lost to history.

Previously, we have used several techniques aimed at identifying where ochre originated based on the chemical and physical fingerprint of the material. These include analysis of elements such as arsenic, zinc, and antimony (known as trace elements), composition of minerals in the iron oxide, and mapping out the patterns of composition of different ochres.

For this study we demonstrated in a proof of concept that analysis of microbe RNA, a form of genetic material, can be used to discriminate between samples from four known ochre sites. This profiling can be used to identify a particular ochre material. 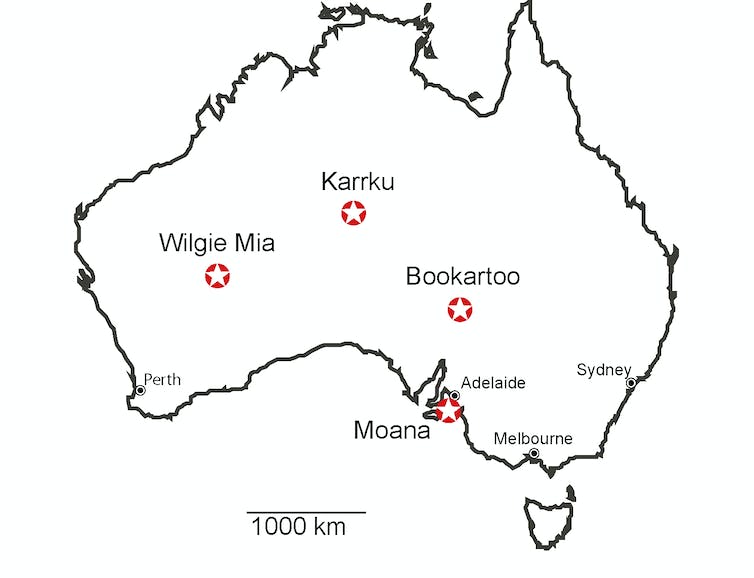 Geographic locations of the ochre sources sampled in this study. Modified and reprinted with permission. d-map.com

Determining the composition of microbes in ochres by RNA sequencing can now be used as a technique in archaeological science.

In addition to effectively discriminating ochre sources, this relatively non-destructive technique could be applied to the analysis and provenance – that is, identifying the original source and site – of a range of cultural materials.

When artefacts move about

The concept of provenance is a critical one in archaeology. When an artefact is found at an archaeological site, it implies the item was deposited or discarded by an earlier culture or individual.

Here, stratigraphy – the understanding of the layering of archaeological remains at a site relative to their age – becomes important.

By examining objects relative to the stratigraphy of the site or relative to other cultural remains, archaeologists can interpret the age and use of the object. The interpretations are based on careful evaluation of visual evidence.

In the all too common situation where the object has been far removed from its original location (perhaps by cultural upheaval, cultural exchange or colonisation), the original provenance and all the contextual information about the origins of the object is lost. However, the object retains a chemical and physical “fingerprint” of the original raw material.

Humans throughout time have used a range of technologies to manipulate raw materials, and transform them to suit purposes for everyday living and culture.

In the present, contemporary cultures transform petroleum products into plastics and ores into high-tech metals, perhaps with a manufacturer’s name and production code. 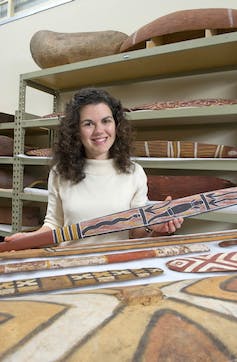 The South Australian Museum has many Indigenous Australian artefacts, and new techniques are helping to identify the sources of ochre used to paint them. Ashton Claridge (Flinders University) and SA Museum

In the past, people used technology of the time to transform natural materials into tools and minerals into pigments. But in most cultures these items do not have an indication of the original manufacturer or date.

Archaeological science provides many tools to understand the use of raw materials and how these materials transform into cultural objects. Common questions that can be addressed include identifying the original raw material, site of the object as well as understanding the technology of the manufacturer.

With sufficient samples and analysis, it can be possible to not only identify the original raw materials of the artefact, but also to begin to understand how objects were exchanged between and within cultural groups.

We can then untangle cultural interactions that are otherwise lost to time.

RECOMMENDED ARTICLES:
'I want to capture the past': Red Ochre Award winner Yvonne Koolmatrie
It's an honour to receive something so big, and to be recognised as well, writes Yvonne Koolmatrie of her Red Ochre Award win as part of this year's Australia Council’s National Indigenous Arts Awards.
The story behind an Ochres dancer: Feature
Dancer Jasmin Sheppard has been making leaps and bounds in her career since she joined Bangarra Dance Theatre as a teenager.
Ochre takes audience on a cultural journey
As the Red Earth Arts Festival continues to roll through the Pilbara region, Western Australia's newest contemporary dance company has been taking audiences on a unique cultural journey.