Previous Next Show Grid
Previous Next Hide Grid
Image 1/
Video
Audio
ANALYSIS: Accurate figures of Indigenous ANZACs' heritage do not exist due to the systematic racism in the early 20th Century. Today, we are discovering new data by relying on the oral histories of the descendants of these 'unrecognised' servicemen and women.
By
Jim McKay

This story contains images of Aboriginal and Torres Strait Islander people who are deceased.

The number of Aboriginal and Torres Strait Islanders who served with Australian forces in the first world war is estimated to be in the range of 1,000-1,200. But the precise figure will never be known, because a number of those who served changed their names and birthplaces when they enrolled to get around racist enlistment practices.

Despite fighting and dying for Australia, Aboriginal and Torres Strait Islanders still weren’t considered citizens upon their return from the war. Many of these veterans were also denied repatriation benefits, and excluded from returned services clubs.

Aboriginal and Torres Strait Islanders have long sought to gain recognition for the service and sacrifices of their men and women. Some do this by telling stories in their families and local communities about the military careers of their forebears.

These stories often take the form of oral histories. Oral history projects by groups of Aboriginal people have proven valuable for redressing the unrecognised service and racist treatment of their ancestors who served in the Australian Light Horse during the Sinai-Palestine Campaign of 1916-18.

Commemorating the Battle of Beersheba

Although most Australians know little or nothing about the Battle of Beersheba, the Australian government funded its centennial commemoration at Beersheba (now in southern Israel) in October 2017.

One hundred Australian and a few New Zealand military history reenactors attended the joint service as part of a commercial tour, during which they rode in period military outfits along the route of their ancestors.

A group of Aboriginal men and women, who were descended from some of the estimated 100 Aboriginal members of the Australian Light Horse, also participated in the tour. Several had ancestors who were in the “Queensland Black Watch”, a predominantly Aboriginal reinforcement unit.

The group’s participation was enabled by a transnational network of organisations, but the key driver was Rona Tranby Trust, which funds projects to record and preserve Aboriginal oral histories. In 2017, it a group of Aboriginal men and women to complete 11 histories of their ancestors who fought and died in the Sinai-Palestine Campaign.

Like the other reenactors, Aboriginal participants were honouring their ancestors’ courage and sacrifice. But they also wanted to document the neglected stories of their service, and the racial discrimination their forebears experienced.

Here we share, with permission, some of the stories that came from the trip, and from the family history projects the group members continue to work on.

Gunditjmara man and retired Army Sergeant Ricky Morris was officially invited to lay a wreath on behalf of all Indigenous veterans at the service in Beersheba. Morris is the 19th of an astonishing 21 men and women Anzacs in his family. He served in a progeny of the Light Horse unit of his grandfather, Frederick Amos Lovett. 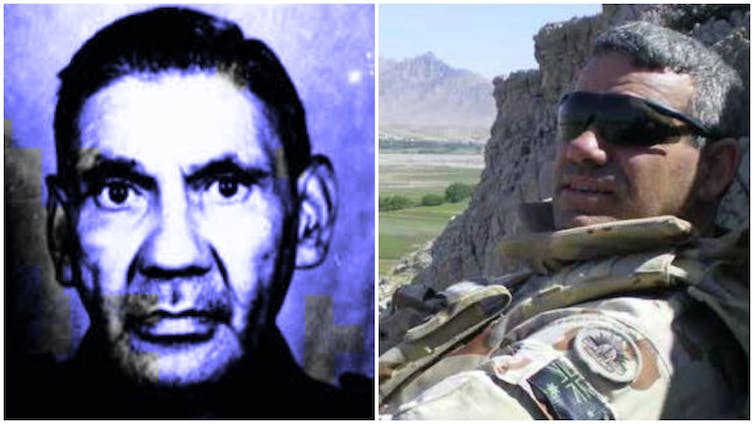 At a time when Aboriginal and Torres Strait Islanders were neither citizens nor counted in the census, Frederick and his four brothers left the Lake Condah Aboriginal Mission, 300 km west of Melbourne, to sign up.

But their service counted for nothing. Gunditjmara people were subjected to a “second dispossession” when they were forced off Lake Condah under the Soldier Settlement Scheme. The scheme granted land to returning soldiers, but like almost all Aboriginal applicants, the brothers were denied soldier settlement blocks.

Morris is a member of the Victorian Indigenous Veterans Association Remembrance Committee and gives talks at schools about Aboriginal culture and his family. He interviewed two elderly aunts for his family history project, which he described as:

…a unique opportunity to follow in the footsteps of those who fought and died for Australia, and the diversity of Australians who put their hands up to answer the call.

Mischa Fisher and her daughter, Elsie Amamoo, undertook the tour to obtain information for a website about Mischa’s grandfather, Frank Fisher. 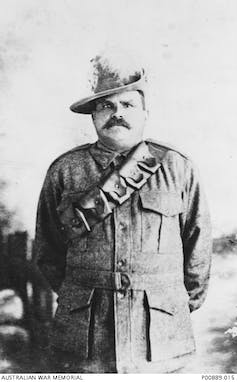 Trooper Frank Fisher was an Aboriginal serviceman who enlisted in Brisbane on 16 August 1917. (Australian War Memorial)

Frank was born into the Wangan and Jagalingou community in the goldmining town of Clermont, 1,000 km north of Brisbane. He was one of 47 men from Barambah Aboriginal Settlement who enlisted in the first world war. While Frank was away, his wife Esme was prevented from accessing his salary. After Frank was discharged, he was again placed under the control of the superintendent at Barambah.

Mischa and Elsie have interviewed Frank’s descendants, and accessed archival footage from the Ration Shed Museum – an Aboriginal heritage, educational and cultural centre. Elsie only recently learned that Frank, who is also the great-grandfather of Olympic 400m champion Cathy Freeman, was a member of the “Black Watch”.

While training for a reenactment of the Light Horse charge at Beersheba, she tearfully told a reporter what the project meant to her:

To me, it feels like I have got a missing piece of the puzzle of who I am […] That’s what it basically means to me: just being able to have that ability to close the gap in terms of my identity and knowing who I am and where I fit in the Australian history, but also within my family as well. 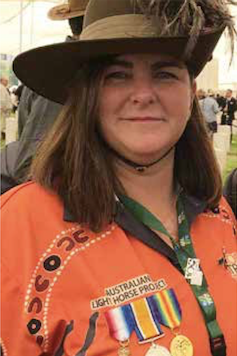 Sisters Michelle and Peta Flynn are descendants of “Black Kitty”, a Cannemegal/Warmuli girl, who, in 1814, was among the first group of Aboriginal children placed in the Parramatta Native Institution at the age of five.

The sisters have been researching their family history for over 20 years. Their ancestors include the three Stafford brothers, who were in the Light Horse.

At Beersheba, Peta explained her motivation for writing a book about her great uncle, Charles Stafford:

My daughter, niece and nephews will be able to take [the book] into their schools and communities and actually be proud of who we are and where we come from – and ensure our family’s history will not be lost to future generations.

Although group members were on a reenactment tour, their emotions were typical of the inward pilgrimages often experienced by genealogical tourists. Past and present family connections were heightened by being there; feelings of sadness, solidarity and pride arose.

At the same time, these stories show the benefits of combining academic, public and vernacular accounts to study silences and absences in the histories of Aboriginal and Torres Strait Islander peoples.

The official commemoration at Beersheba will only ever be studied by a handful of specialist scholars, but the family histories of this group will have enduring value for Aboriginal and non-Aboriginal Australians alike.